The award of two pan-European licences is expected to spur the development of mobile TV services, as well as mobile telephony and broadband solutions in Europe. In fact, mobile satellite operators are, similar to their terrestrial counterparts, preparing the expected boom of mobile Internet and mobile TV applications.

While the mobile Internet is capitalizing on the buzz surrounding ICT, which is often fuelled by the stakeholders themselves (operators, equipment manufacturers and mobile handset makers), consumer take-up remains nascent. 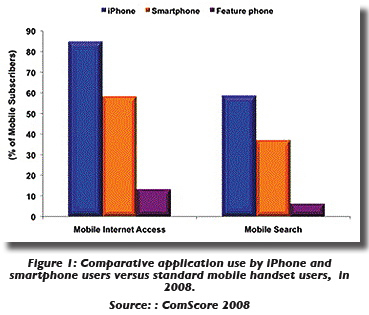 However, take-up is progressing steadily, with the number of mobile Internet users in the United States jumping from 58 million in January 2008 to 104.8 million in January 2009, and mobile customers are tending to incorporate this technology into their daily habits: those who log onto the web every day now account for 22.4 percent of total users, compared to 10.8 percent one year earlier.

Around the world, and especially in developed countries, the fact that users are replacing their existing handsets with smartphones is helping to spur mobile Internet take-up. According to Cisco, a smartphone generates more IP traffic than 30 standard mobile phones, while a PC card generates more traffic than 450 standard cellular phones.

According to a report published in June 2009, hits on websites coming from mobile handsets (phones, smartphones, iPod Touch... ) increased fivefold in a single year. This growth was driven in large part by the use of iPhones: visits from iPhones rose by a factor of eight in one year. Hits from Blackberrys are also up, increasing five times over the course of a year. Blackberrys account for 7 percent of hits from mobiles and the iPhone for 44 percent.

According to Cisco, IP traffic generated by the mobile Internet will likely increase substantially between now and 2013, to reach over 2 exabytes (1018 bytes) a month. The growth of the number of 3G/LTE PC cards in use (which are expected to generate over 80 percent of mobile IP traffic in 2013) along with the mass consumption of video by travelling users (expected 131 percent annual growth in 2009-2013) explains this rise in IP traffic come from the mobile Internet.

Cisco estimates that video will account for 64 percent of mobile IP traffic in 2013, predicting a sizeable upswing in 2011-2012 which coincides with the commercial launch of 4G worldwide. 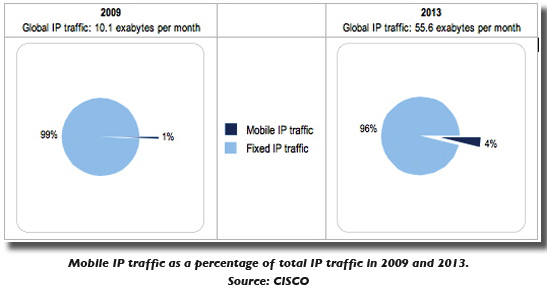 At the same time, mobile TV is being developed worldwide, and notably in Europe. In Norway, a mobile TV service based on the DMB standard was launched in May of this year. It is a free-to-air offer that includes 6 TV channels and 15 digital radio stations. Baptized MiniTV, the service is distributed in the greater Oslo region by a consortium of three Norwegian broadcasters: public broadcaster NRK and two commercial companies, TV2 and Modern Times Group, which also plan on introducing additional pay-TV channels.

In the Netherlands, the firm Mobiele TV Nederland was awarded a DAB and DMB licence in February 2009, and is preparing to roll out a DMB-based mobile TV service that will compete directly with incumbent KPN’s DVB solution. Mobiele TV Nederland is joint-venture between network operators Media&Broadcasting (a TDF subsidiary) and Mobiles Fernsehen Deutschland.

Despite there being a number of uncertainties on both the technological and economic front, and in terms of regulation, mobile TV is being tested widely in Europe. In some cases, consumer offers using the DVB-H are already available, in most cases spurred by a global sporting event. 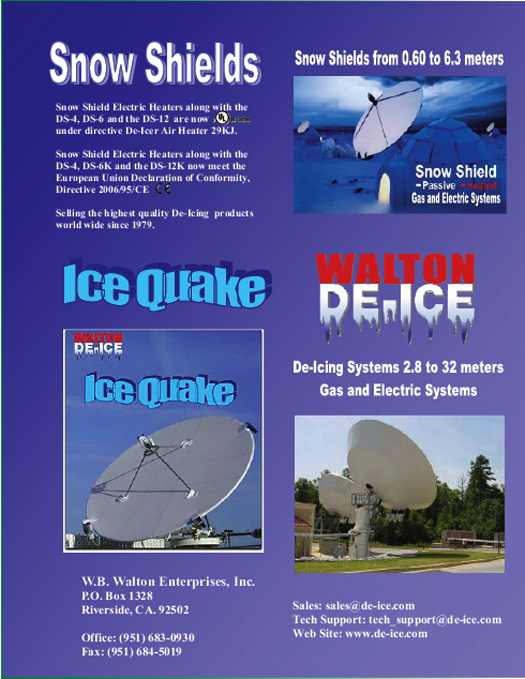 Mobile TV was launched in Italy, for instance, in 2006 just before the World Cup in Germany, while Austria and Switzerland, which were the host countries for the European football championships in 2008, rolled out their offers just before the event began.

In Italy, Switzerland and the Netherlands, mobile TV services have been launched at mobile telephony operators’ initiative. The rate of coverage for the services depends on the operator’s network, while the packages on offer and prices charge vary from operator to operator. Customers do have to pay for the services, which are generally composed of a basic offer that can be upgraded to a premium package that includes specialty channels, adult programming, sports (game highlights, weekly programmes, live matches) and on-demand content. Depending on the type of programme, pricing will be per-day, per-week or per month.

In Austria, the regulator awarded a broadcast mobile television licence to French network operator TDF’s Hungarian subsidiary, Media Broadcast, which then established agreements with mobile operators Orange, A1 and 3, all of which also distribute an offer.

In Finland and Hungary, DVB-H services were deployed by network operators Digita and Antenna Hungaria, which led to the launch of free-to-air services offering an only small selection of channels.

Elsewhere in Europe, trials have been completed in different parts of the country on a system using the DVB-H standard, or are still underway.

Are MSS/ATCSsystems Rivals Or Complementary To Terrestrial Technologies?
Based on IDATE’s findings, it is clear that a terrestrial system will never cover 100 percent of the population. As a result, and given the vast European plan to reduce the digital divide, satellite technology will likely continue to play a central role in helping to connect the last remaining users who are currently cut off from the digital world.

It appears obvious that in the data transmission and mobile telephony segments, satellite is not positioned as a competitor to terrestrial networks, but rather as a complement. 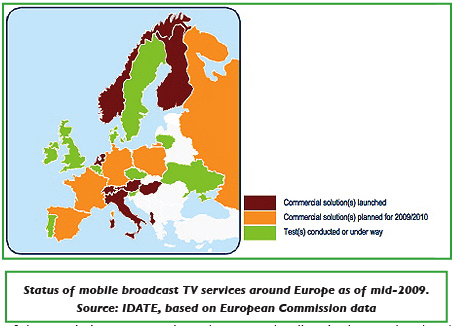 Regarding mobile TV, DVB-SH appears to us as both a complement and competitor for DVB-H, since business models that were recently tested in France and Italy proved that DVB-SH is very competitive in terms of rollout costs, even in highly urban areas, which is just one more element in its favor.

In April 2009, the Mobile TV Forum commissioned Siradel, a firm that specializes in wireless network coverage optimization, to produce a report that compares a DVB-H personal mobile TV network rollout in the UHF band and a DVB-SH network rollout in the UHF band. The report provides a theoretical but realistic dimensioning of a mobile TV network to be able to calculate the amount of equipment and sites needed to cover the following areas: Paris and its immediate vicinity and the metropolitan areas of Lyon and Bordeaux — these latter two cities having been chosen for their different topographical features: hilly for Lyon and flat for Bordeaux. The simulation also set the goal of providing good quality reception indoors in close to 100 percent of the target coverage area. 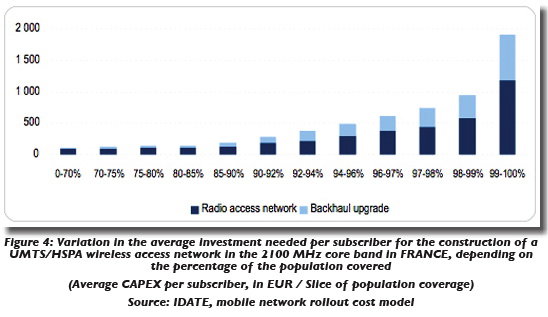 The results of the theoretical dimensioning revealed that, to achieve relatively equal coverage of the population in a given area, DVB-SH in UHF requires around 30 percent fewer transmission sites, and using it to roll out a mobile TV network would be around 30 percent cheaper.

Worth noting is that a second report produced by Siradel in September 2009 concerning Paris and its immediate vicinity revealed that a DVB-SH system in the S-band (and not UHF) would require around 35 percent fewer terrestrial repeaters than DVB-SH in the UHF band. This means that using DVB-SH in the S-band would require 50 percent fewer transmitters to cover Paris and its immediate vicinity (10 percent of the French population), compared to DVB-H. 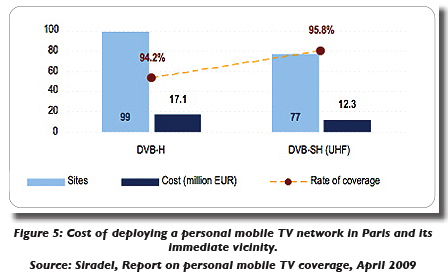 The cost of deploying DVB-SH in the S-band would be 60 percent lower than DVB-SH in UHF, and 70 percent less than a DVB-H rollout.

Beware of DVB-T!
The lack of hybrid T-DMB/S-DMB devices when the satellite-based mobile TV service was launched in Asia was widely viewed as a major reason for the tepid reception these offers got, especially in Japan.

In Europe, the players appear to have taken that lesson on-board, and have been working over the past several years to form partnerships with key chipset and device manufacturers.

Whereas DVB-H/DVB-SH hybridization is a necessity, the arrival on the market of DVB-T chipsets could be a serious threat for the subscription-based mobile TV model

In 2008, devices equipped with a DVB-T chip, and so capable of receiving free-to-air digital terrestrial TV channels, came on the market.

In Germany, operators T-Mobile and O2 began marketing cellular phones equipped with a DVB-T chipset in May 2008. As part of a two-year subscription billed at 39.95 euros a month, Vodafone was selling an LG brand phone that could receive the DVB-T signal for 99.90 euros and the GSmart T600 handset for 289.90 euros.

In Austria, the LG HB620T phone is marketed by mobile operator A1, and allows users to receive the six national free-to-air channels, ORF1, ORF2, ORF Sport +, ATV, Puls4 and 3Sat, as well as local DTT channels when travelling abroad.

Even if DVB-T does not offer the same viewing quality as DVB-H (especially because of the lesser reception quality when on the move), a great many consumers could be satisfied with it — wanting only to watch free-to-air DTT channels on their mobile phone for a few minutes, from time to time. Users’ tolerance of a low quality service will be higher as the service is free.

What happened in Japan and South Korea proved the threat posed by a free service, particularly if the terrestrial service has the huge advantage of being able to pick up major channels that are already popular with viewers.

Maxime joined IDATE as a senior consultant in April of 2006. His main area of endeavour is monitoring the satellite industry, the telecommunications services market, and operator strategies.

Prior to coming to IDATE, Maxime worked for two years for a major strategy consulting firm specialised in the space industry, where his work focused primarily on industrial analysis of satellite telecommunications for space agencies and the sector’s equipment providers.
He can be reached at m.baudry@idate.fr