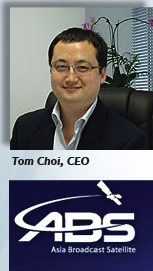 Asia Broadcast Satellite (ABS) is one of the youngest and fastest growing satellite operators in the world.  Since its inception in late 2006, ABS has been able to achieve 10 consecutive quarters of over 20 percent Quarter-on-Quarter compounded growth. In just over 2 years of operations, ABS has been able to achieve 99 percent fill rate on ABS-1, with over 40 customers across 20 different countries and currently broadcasts over 100 TV channels.

We have increased our revenues eightfold since the acquisition of the former LMI company.  From our orbital position at 75 degrees East, we can access four-fifths of the world’s population so we feel that we provide significant value to our customers and we foresee solid future growth through the acquisition of other satellite assets.

ABS is working on securing financing for ABS-2 through the US Exim Bank and is targeting for completion by the end of the year. ABS-2 will be co-located at the 75 degrees East location with ABS-1 and will be manufactured by Space Systems Loral scheduled to launch in 2012. This new satellite will offer more than 78 active transponders (composed of C- , Ku- and Ka-bands), with dedicated Ku-band beams over SE Asia, India-ME, Russia, Middle East, North Africa, and Southern Africa, with significant power enabling DTH services in these markets.

ABS-2 also acts as an in-orbit spare and back up for ABS-1 so we are able to provide our customers with guaranteed redundancy and a much higher quality of service.  The sophisticated design of the ABS-2 spacecraft will also provide added flexibility by allowing us to switch capacity on a transponder-by-transponder basis between the individual beams into high demand areas where our customers may need additional capacity. ABS has already signed prelaunch lease contracts with customers valued in excess $300 million of revenue backlog. Over the next 12 months, we are aiming to get the satellite 75 percent full, prior to launch.

Beyond completely selling out all of the capacity on ABS-1 and finalizing the completion of the ABS-2 procurement process, ABS is poised to sustain its successful revenue growth through its investment and launch of new Value Added Services platforms, not only on ABS-1, but also through partnerships with third-party satellite operators. ABS has made more than US$5M investments in teleport facilities for video and data distribution services; we have invested in various VSAT and MCPC platforms in both our Germany and Hong Kong facilities using MPEG-2/DVB-S as well as MPEG-4/DVB-S2 for standard and high definition video distribution, and Mobile Video distribution service.

During the past year, ABS has made some strategic partnerships and M&A activities which have dramatically expanded our business, both in scope and scale.

Earlier this year, ABS acquired Koreasat 2 which was renamed to ABS-1A as part of its fleet expansion. The ABS-1A satellite provides valuable high-powered Ku-band capacity for satellite telecommunications and broadcast services to ABS’ customers in the Middle East region and will allow us to continue growing our revenues during the ABS-2 construction.

The recent acquisition of the Mabuhay Satellite Corporation (MSC) was another significant deal for ABS’ aggressive growth plans. The procurement of MSC comprises the entirety of Mabuhay’s assets, including the Agila 2 satellite, the Subic Ground Control center and a full Network Operations center.  It represents a doubling of the in-orbit capacity that we have in our fleet with now over 100 transponders. We will increase our revenues and EBITDA by around 60 percent. That is without increasing the utilization rate on Agila-2 or getting better transponder yields. In effect, we may be able to double our revenues once we make better use of our capacity.

Also, Mabuhay’s advanced ground segment is a valuable asset to ABS as we do not own any TT&C facilities. The Subic center gives ABS much greater control of its own satellite assets; ABS-1, ABS-1A, Agila 2 and ABS-2. Over the long term, this will provide significant savings and resources for our future operations.

Back in September, GT Satellite Systems S.A. (GTSS) and ABS signed a long term, multiple transponder deal, which will provide GTSS with expansion capacity on the new ABS-2 satellite that is scheduled to be launched in 2012. As part of the multi-year contract, GTSS will significantly expand its existing capacity on ABS-1 by leasing multiple Ku-band transponders on the powerful ABS-2 Russia/CIS Beam for further expansion of its TV distribution services from the most popular CATV channels location in Russia, and its newly launched Raduga TV DTH platform. 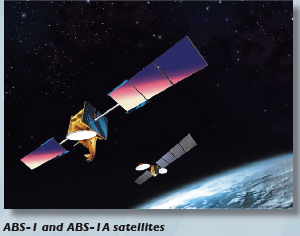 ABS-2 will be co-located with ABS-1 at 75 degrees East. ABS-2 will offer nearly 14 KW of payload power and as many as 78 active C-, Ku- and Ka-band transponders across 8 different beams. The satellite is designed for 15 years of operational life. The ABS-2 spacecraft will be manufactured by Space Systems/Loral and launched via Arianespace.

ABS is constantly looking for opportunities for developing new orbital locations and looking at ways to expand our business into other industries that are complimentary with satellite infrastructure. We are confident that we will reach our goal to have at least four satellites in orbit within the next 5 years.