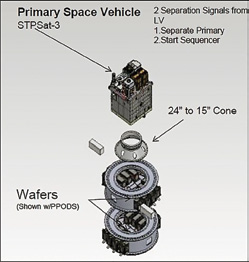 The outcome of this test is of great interest to the military as well as to NASA. The launch is also part of the Federal Aviation Administration’s (FAA) certification process for the Minotaur rocket. The FAA has licensing authority over American commercial rockets.

NASA’s LSP (Launch Services Program) ELaNa-4 (Educational Launch of Nanosatellite-4) will launch eight more educational CubeSat missions. The ELaNa-4 CubeSats were originally manifest on the Falcon-9 CRS-2 flight. When NASA received word that the P-PODs on CRS-2 needed to be de-manifested, LSP immediately started looking for other opportunities to launch this complement of CubeSats as soon as possible.

Photo of the ORS-3 launch configuration. The SPTSat-3 rests on the top, with the integrated payload stack situated at the bottom. The photo is courtesy of the Air Force Research Laboratory (AFRL).

Approximately 12 minutes after the lift-off of the Minotaur I, the SPTSat-3 spacecraft was deployed at an altitude of some 500km. And then the tricky portion of the mission occurred... a pre-planned collision avoidance maneuver was executed to set-up the CubeSat deployments.

(The news article, NASA + Orbital in InfoBeam Part II reveals the composition of the instruments that are part of the STPSat-3 craft.)

The CubeSats were arranged in a CubeStack comprised of wafters, with the CubeStack adpater itself designed by LoadPath and Moog CSA Engineering.

All of the CubeSat developers participating in this mission verifid their craft complied with P-POD (Poly Picosatellite Orbital Deployers) requirements. These specs have all been developed by the California Polytechnica State University (Cal Poly) of San Luis Obispo, California, and enable the integration of CubeSats onto launch vehicles.

A CubeSat has to be built to a standard dimension of 10x10x10 centimeters, otherwise known as 1 unit, or 1U. CubeSats may be developed in a variety of sizes: 1U, 2U, 3U or 6U in size, but each unit must weigh less than 3 pounds... the only exception is a 6U CubeSat, which may weigh as much as 12 to 14kg. The final requirement is that CubeSats must be capable of P-POD deployment.

The following article offer a taste of the CubeSat included in the ORS-3 mission that enabled the small satellite’s deployment through the incorporation of eight P-PODs aboard the craft.