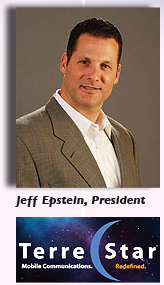 Over the past 12-months, TerreStar has redefined the mobile communications landscape by successfully launching the world’s largest, most powerful communications satellite and developing the first integrated satellite and cellular 3G smartphone. Our goal is to provide critical communications services when terrestrial networks are unavailable, thereby ensuring true ubiquity and reliability in North America for those who depend on their wireless device to always be connected.

2009 was a breakthrough year for TerreStar. TerreStar-1 was launched on July 1st from Kourou, French Guiana. On July 14, TerreStar-1 successfully deployed its 18 meter reflector, the largest commercial satellite antenna ever unfurled. When this reflector and high power feed array are coupled with our advanced ground based beam forming system, TerreStar-1 generates more than 500 dynamically-configurable spot beams. These spot beams enable TerreStar’s network to allocate power and capacity to ensure voice and data services when and where needed most. And thanks to our cutting edge handset/chipset development, we can deliver these services to an everyday mobile device.

Our first of its kind network needed a user device that would offer fully functional 3G mobile service capabilities for typical communications needs within the existing wireless coverage areas, and also allow users to switch to our satellite service when out of range of cellular service or when cellular service is unavailable due to a natural or man-made disaster. Meeting this need meant we had to create a well-designed mobile device with integrated satellite and terrestrial connectivity options, as well as work with our partners to define the potential for future devices to be created by others.

In April, we introduced the world’s first quad-band GSM and tri-band WCDMA/HSPA smartphone with integrated all-IP satellite-terrestrial voice and data capabilities. The TerreStar™ GENUS™ is similar in size, look and feel to today’s cellular smartphones, but will also allow users to seamlessly and securely stay connected to TerreStar-1, as well as terrestrial networks. We believe the TerreStar GENUS is a revolutionary device, combining 3G terrestrial wireless capability with satellite voice and data in a standard smartphone size and form factor. The device uses the Windows 6.5 Mobile® operating system to provide rich smartphone functionality and includes premium features such as a touchscreen, WiFi, Bluetooth®, GPS and a QWERTY keyboard.

The solution is intended to work as a user’s everyday cellular smartphone device, with satellite access capability as a back-up option when needed. We were proud to announce on July 20, 2009, the successful completion of the first end-to-end phone call over TerreStar-1, between two TerreStar GENUS smartphones. The call demonstrated not only the power of TerreStar-1 and the TerreStar smartphone, but also showcased the flexibility of TerreStar’s all-IP core network.

We have also started work on the nextgen of integrated satellite/terrestrial devices. We have signed agreements with Qualcomm and Infineon to add our satellite capability into their next generation chipsets. We believe these agreements will enable ubiquitous mobile communications coverage from anywhere in North America using mass-market devices costing about the same as cellular-only devices. The goal is to create an ecosystem where satellite-terrestrial handsets that will operate with multiple cellular and satellite-based communications technologies — where satellite capability becomes a standard in next generation chipset designs.

Building on this year of ‘firsts,’ on September 30th we announced our first distribution agreement with AT&T, which plans to offer the TerreStar GENUS solution to its government and commercial customers, providing these customers with an everyday wireless smartphone with the capability to connect to a satellite network as a backup, all using one phone number and on one bill. TerreStar-1 will act as a cell site in the sky to provide coverage required to help AT&T subscribers stay connected.

The steady stream of success in 2009 included:

2009 was a momentous year for TerreStar as we worked with our partners to create a historic list of ‘firsts’ in this newly-formed category of mobile communications. As we transition into 2010, we look forward to continuing the momentum established this year and will focus on launching a service that will fuse the power of the nation’s first all-IP mobile communications network with an integrated next-generation satellite — all to enhance the mobile experience and redefine mobile communications for our customers.

We are focused on growth in 2010 and remain steadfast in our quest to offer a resilient integrated communications services to government, energy, utility, transportation and maritime users, as well as to provide the critical communications interoperability and back-up capability — essential for public safety agencies, first responders, emergency services and disaster recovery groups.