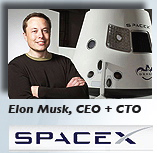 In just seven years, Space Exploration Technologies (SpaceX) designed the family of Falcon launch vehicles and the Dragon multi-purpose spacecraft from the ground-up. Each year SpaceX has marked key milestones in its overarching goal of increasing the reliability and reducing the cost of space access, and 2009 continued that progress.

The most notable SpaceX achievement of 2009 was the launch of the first privately-developed liquid-fueled rocket to put a satellite into Earth orbit. The fifth flight of Falcon 1, a two-stage, liquid oxygen/rocket-grade kerosene vehicle designed and manufactured by SpaceX, lifted off on Monday, July 13. This launch placed the Malaysian satellite RazakSAT into a Near-Equatorial Low Earth Orbit (NEqO) at 685 km altitude and a 9 degree inclination, achieving the desired orbit and marking another successful flight.

Falcon 9 leverages the reliability built into the Falcon 1 design by employing the same architecture as the Falcon 1; Falcon 9 also offers engine-out launch capability for the first time in the United States since the Saturn programs. In 2009, SpaceX accomplished a series of major achievements in preparation for the inaugural launch of the new Falcon 9 vehicle and Dragon spacecraft, both designed and built by SpaceX. 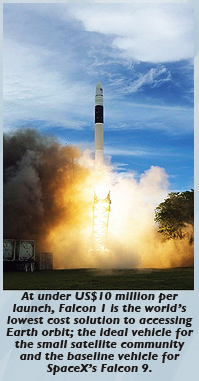 Just after New Year’s Day 2009, the SpaceX team verified ground support hardware by taking the rocket vertical for the first time using the SpaceX-designed transporter erector. The early part of the year also saw key milestones in the development and production of Falcon 9. In March of 2009, SpaceX’s new Merlin vacuum engine, which powers the upper stage of the Falcon 9 launch vehicle, demonstrated a vacuum specific impulse of 342 seconds — the highest efficiency ever for an American hydrocarbon rocket engine. Since then, the Falcon 9 has completed final structural and propulsion acceptance testing at SpaceX’s Texas Test Site and has shipped to Florida for its inaugural launch. As 2009 comes to a close, the launch site team is in the final stages of refurbishing Space Launch Complex 40 (SLC 40) at Cape Canaveral Air Force Station in Florida.

The first launch of the Falcon 9 launch vehicle is a demonstration flight and will carry SpaceX’s Dragon spacecraft qualification unit, providing valuable aerodynamic and performance data for the Falcon 9 configuration that will fly on the following Commercial Orbital Transportation Services (COTS) and Commercial Resupply Services (CRS) missions for NASA.

The Falcon 9/Dragon system is poised to provide a complete commercial solution for transporting cargo, and potentially crew, to the International Space Station (ISS). The second flight of the system will begin SpaceX’s participation in NASA’s COTS program, a first-of-its-kind program that awarded SpaceX three launches to demonstrate the capability to berth with the ISS, transfer cargo, and return the cargo safely to Earth.

In preparation for the COTS flights, 2009 saw the full qualification of the Dragon spacecraft and all associated systems, including DragonEye. SpaceX’s DragonEye Laser Imaging Detection and Ranging (LIDAR), was launched aboard NASA’s STS-127 shuttle mission in July of 2009. Developed in just 10 months from concept to final hardware, the DragonEye LIDAR provides three-dimensional images based on the amount of time it takes for a single laser pulse from the sensor to reach a target and bounce back, and provides range and bearing information from the Dragon spacecraft to the ISS.

Following completion of the COTS program, the Falcon 9/Dragon system will begin to execute the 12 missions under the NASA CRS contract award for transporting a guaranteed minimum of 20,000 kg to the ISS. The firm contracted value is US$1.6 billion, and NASA may elect to order additional missions for a cumulative total contract value of up to US$3.1 billion.

While it will initially be used to transport cargo, the Dragon spacecraft was designed from the beginning to transport crew. Almost all the necessary launch vehicle and spacecraft systems employed in the cargo version of Dragon will also serve the crew version of Dragon. As such, Dragon’s first cargo missions will provide valuable flight data that will be used in preparation for future crew transport flights. This allows for a very aggressive development timeline — approximately three years from the time funding is provided to transform from cargo to crew. 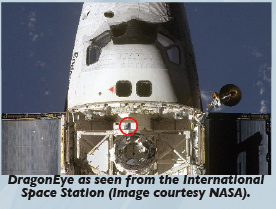 In 2009, the SpaceX team also closed three significant international and domestic contracts, bringing the total value of its launch manifest to over US$2 billion. These contracts include two launches for CONAE, Argentina’s National Commission on Space Activity, aboard SpaceX’s Falcon 9 medium-to-heavy lift vehicle; multiple launches for 18 ORBCOMM Generation 2 (OG2) satellites aboard SpaceX’s Falcon 1e (an enhanced version of Falcon 1); and a key contract with Astrium to launch a satellite designed by Astrium or its recently acquired subsidiary Surrey Satellite Technology (SSTL), also on a Falcon 1e.

2009 was a great year for SpaceX, and as the team looks forward to 2010, all eyes will be on Cape Canaveral for the first flight of the Falcon 9 / Dragon system.  For more information and additional SpaceX 2009 achievements — including the qualification of a heat shield reentry material and growth to over 800 employees — please visit the company’s web site at www.SpaceX.com.