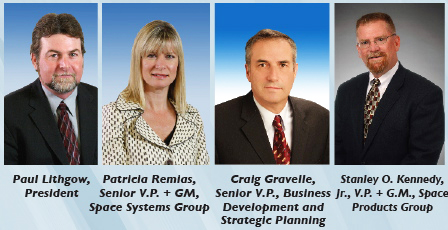 For more than 20 years, Comtech AeroAstro (CAA) has remained diligent in its conviction that small satellites and related technologies can provide significant capability for effectively achieving military, civil and commercial space mission goals. Increasing trends are away from reliance on large space systems, total risk avoidance, and long mission life as these systems are costly and require long development timeframes — during which technologies become outdated even before they are launched. It is now evident CAA’s patience is paying off and that the time of high-utility smaller space systems has truly arrived.

A wholly owned subsidiary of Comtech Telecommunications Corporation, CAA is led by President Paul Lithgow, a 30-year aerospace veteran who led CAA through acquisition and transformation while maintaining CAA’s heritage as a premier small satellite, component and mission payload provider. Under Mr. Lithgow, innovation and entrepreneurism continue to thrive, but with increased emphasis on expanding CAA’s customer base, satisfying government space systems requirements and increasing mission-level capability. In 2009, CAA reorganized into two business areas: the Space Systems Group and the newly formed Space Products Group. These organizations are focused on demonstrating the high value capabilities of small satellite systems and technologies.

Examples of this are CAA’s STPSat-1 and -2 programs. Developed for the DoD Space Test Program, these satellites are designed to capitalize on excess mass and volume margin as secondary missions on Atlas V and Delta IV Evolved Expendable Launch Vehicles (EELVs), instead of requiring their own expensive launch vehicle. CAA developed and supported the launch of the STPSat-1 in March 2007 on an Atlas V. This satellite, designed for a one-year mission life, was decommissioned in October 2009 after successfully providing more than 2-1/2 years of valuable mission data. The initial program manager for STPSat-1, Ms. Pat Remias, is now Senior VP & GM for CAA’s Space Systems Group. Under her leadership in this role, CAA also delivered the first STP Standard Interface Vehicle (SIV) satellite bus in December 2008; that mission, STPSat-2, is awaiting launch in 2010. Once proven, the STP-SIV bus will become a workhorse platform for hosting a variety of missions and payloads to a wide range of low Earth orbits.

CAA is currently under contract to develop a microsatellite bus (<200kg) for the U.S. Navy’s Joint Milliarcsecond Pathfinder Survey (JMAPS) program to provide highly accurate star position data for military and civil applications. Similar in size to the STPSat-1 and -2 vehicles, this satellite bus, called the Astro 200AS, has better pointing accuracy than vehicles in the commercial imagery business at a fraction of the cost. This capability enables a range of new high-value mission and sensor options on an affordable platform that can be rapidly developed and deployed.

Building on these successes and advancements, CAA is looking to the future. Specifically, the goals of Operationally Responsive Space (ORS) fit ideally with CAA’s commitment to the value of smaller, rapidly developed systems to accomplish critical missions. CAA has been operating in this area since ORS’s inception, developing a detailed preliminary design for a Modular Multi-mission Space Vehicle (MMSV) for ORS in early 2009. This design was further refined and led to an award in September 2009 for a 5-year IDIQ contract from AFRL for Advanced Plug-and-Play (PnP) development. CAA has been an advocate for spacecraft PnP since 2001 and believes it to be an enabling technology for spacecraft that can be configured and launched in less than seven days — a key goal for successful responsive space operations. CAA sees the technology as an enabler for a new way to develop spacecraft of all size classes, big and small, by shortening schedules and reducing costs without compromising delivered performance.

Is there a limit to how small a high-performance satellite can be? Recently CAA unveiled its Coral CubeSat; this satellite, which is the size of a loaf of bread, can be deployed as a secondary payload from almost any launch vehicle. Universities and other organizations, such as NASA Ames Research Center, have already demonstrated the utility of these satellites. CAA’s Coral satellite provides very high performance for a variety of mission sets in a very small, compact, low cost package. This spacecraft uses miniaturized but sophisticated components (many developed by CAA) and broadens opportunities for serious experimenters to quickly and affordably test their mission and payload ideas in space. With advancements in miniaturization of electrical and mechanical systems, very capable yet very small space systems are not only possible, but already proving their worth — a conviction CAA has held all along