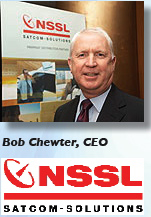 This past year, NSSL turned 40. An impressive age for any company, but particularly for one that exists in the fast moving and ever changing world of satellite communications. And, quite fittingly, I can honestly say that since our inception in 1969, NSSL has never had a more exciting year. We have not only survived the economic down turn, but we have thrived. In 2009, NSSL achieved Distribution Partner status for BGAN, FleetBroadband, and GSPS with Inmarsat, picked up an industry award, launched a new service across Africa and the South Atlantic, formed a new partnership with Telemar Scandinavia and continued to support the British Forces in a variety of inspiring and challenging expeditions.

In March, we celebrated confirmation that NSSL had been granted the much coveted status of Distribution Partner by Inmarsat for its BGAN and FleetBroadband services after a thorough review of our capabilities and business plans, Inmarsat appointed us as a Distribution Partner. Having an increasingly direct relationship with Inmarsat has meant that NSSL is able to respond more rapidly to changing customer requirements. We have been able to introduce greater creativity and flexibility, offering customers a variety of tailored airtime pricing packages. On the technical front, having a direct connection into the Inmarsat network at our Point-of-Presence (POP) in London, U.K., allows us to bring a range of Value Added Services to market, as well as bespoke solutions specifically designed around the customer’s application and networking requirements.

What made the announcement particularly unique was that it covered Inmarsat’s BGAN (492/492kbps land mobile broadband) and FleetBroadband (432/432kbps maritime broadband) services. When coupled with NSSL’s Tier-1 distribution status for BGAN and FleetBroadband hardware and world-class customer support, maintenance and integration services, NSSL customers are now able to enjoy true end-to-end service on land and at sea.

In May, NSSL began offering organisations that operate across Africa greater choice when it comes to keeping in touch. Those organisations that wanted faster and more robust broadband connectivity were able to benefit from a substantially quicker 3MB (and then later 4MB) connection. This represented a massive increase in speed in comparison to other communication solutions and at a far more accessible price. All of this was possible thanks to the launch of the new T11 satellite. 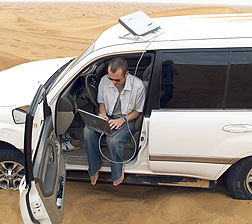 Improved broadband access will help to solve some of the issues that have prevented organisations that operate in Africa from fully enjoying the benefits of rapid and reliable communications. As a new provider in the region, NSSL is now able to act as a convenient one-stop-shop for all SATCOM needs. We provide upfront consultancy on the most suitable equipment, and can then provide that equipment from a broad selection of different types and models. NSSL then manages the service contract and provides ongoing maintenance support.

In October we launched a new Crew Card offering on FleetBroadband. This new offering has been designed to boost crew morale by offering crew members, stationed for long periods of time across the globe, a more affordable and reliable method of contacting loved ones.

At the end of October we were delighted, once again, to be selected as a Distribution Partner for Inmarsat for the new Global Satellite Phone Services (GSPS). The appointment started immediately and next year (Q2 2010), the first product to be introduced will be the IsatPhone Pro, a global handheld service.

In November, NSSL celebrated the successful completion of the KC09 expedition. More than 80 Royal Marine and Royal Navy personnel returned home after undertaking a truly inspiring expedition to Khumbu, the mountain range in the Everest region in the Himalaya. The team made use of the latest in satellite communications technology from NSSL, allowing them to stay in contact with friends and family and with the base camp. They also used the equipment to update the expedition website with diary entries and videos and, should the need have arisen, to call in emergency support.

KC09 was the inaugural expedition of Project FORTITUDE, an initiative to further enduring rehabilitation opportunities for the men and women of the Royal Marines, Sailors and Soldiers who have been injured on operations and who have suffered visible wounds as well as those who bear the less visible wounds of psychological injury. The aim was to enhance the support to individuals and their dependants during the rehabilitation phase from point of injury until re-integration within the Royal Marines/Royal Navy, or integration into civilian employment, care, or retirement. Opportunity, Challenge, Focus, and Belonging were the cornerstones of the expedition. The Khumbu Challenge team was comprised of five teams totalling 86 personnel.

What better way to wrap up the year than to receive an important award! At the Inmarsat Global Partner Conference in Berlin, NSSL was recognised for The Greatest Contribution to BGAN Growth 2009.