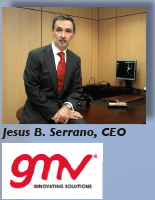 GMV, one of the world’s leading suppliers of satellite ground systems headquartered in Madrid with an American subsidiary in Rockville, Maryland, continued to experience strong growth and play a major part in the success of satellite missions around the world in 2009. GMV saw an 18 percent increase in overall revenue, up to $128 million for business conducted in 2008. Space and defense is the largest business area in the company and produced revenue of $94 million U.S. dollars.

Founded in 1984, GMV specializes in the supply, development and integration of engineering systems for the aerospace, defense, security, healthcare, transportation, telecommunications and IT sectors. GMV has been providing satellite ground systems to satellite manufacturers, commercial operators, integrators, and Space Institutions around the world for more than 25 years.

GMV’s customers in space and defense include Space agencies in North America, Europe and Asia, eight of the 10 largest commercial GEO satellite operators in the world, as well as many of the medium and smaller-sized operators across the globe. In 2009, 14 satellites were launched with GMV systems. There are currently more than 150 satellites being operated with GMV systems from seven continents and 25 countries around the world.

Despite the difficult global economic situation, GMV was able to surpass the leadership’s growth goals for 2008.

In the United States, GMV provided its Mission Planning & Scheduling system, FlexPlan, for NASA’s Lunar Reconnaissance Orbiter. In South America, GMV and StarOne partnered to upgrade the Brasilsat Satellite Control Facility, which includes the Satellite Control Centre system, hifly, and the Flight Dynamics System, focus. In Europe, GMV was commissioned by the European Space Agency (ESA) to build a prototype of an all-terrain, rover-type Space vehicle to explore the surface of Mars and the Moon. GMV also recently launched atlas GMV® &#8213; a new software solution that enables the use of Blackberry® Smartphone to access open source email based on Linux.

GMV’s groundbreaking work around the world has enabled it to increase its presence in other countries, forging ahead in its goal of worldwide expansion. In 2009, GMV set-up new subsidiaries in Poland and Germany as well as offices in Malaysia and the Korean Republic. GMV’s success also was recognized by several organizations in 2009.

For the first time, Space News ranked GMV among the top 50 space manufacturing and services companies in the world, based on GMV’s space related revenue in 2008. GMV also was the grand prize winner of the 2009 European Satellite Navigation Competition Award. The company’s Osmógrafo® system rose to the top of 300 high-technology projects submitted for review from 30 different countries competing in this year’s competition. GMV’s Osmógrafo® was honored for its innovative technology that allows search and rescue teams to better track the work of sniffer dogs, therefore reducing the loss of life and improving recovery of buried victims during disasters.