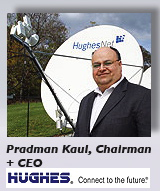 Despite the challenging economic environment of 2009, I’m happy to report that the Hughes business model has proven to be steadfast. We’ve achieved three more quarters of positive results following a successful 2008, when we crossed US$1 billion in revenues and achieved a healthy EBITDA of US$155 million, making it 13 successive quarters of meeting or exceeding our stated goals since going public in 2006. So what’s driving our success?

Innovation of broadband satellite technologies and products continues as our core strength, but its the thriving service business globally that’s fueling our growth. In 2009, recurring service revenue from an expanding base of repeat customers in North America, Europe, India, and Brazil exceeded our product revenues and is growing at a faster rate.

Consumer Growth Leads
In North America, our HughesNet® consumer business continues to lead the way, with impressive yearly growth of 19 percent in services revenue, and now with a total subscriber base of more than 490,000 in number. Our strategy of pursuing the estimated 10 million households and 3.5 million small businesses unserved by terrestrial broadband technologies is paying off and validates the high priority people place on broadband. The positive effect of operating our own SPACEWAY® 3 satellite, which we launched in April 2008, continues to show on our bottom line results. We are also rapidly expanding service offerings that exploit its high capacity, onboard switching and bandwidth-on-demand capabilities. For example, we now offer consumers high speed satellite Internet plans available in North America — up to 5Mbps.

Enterprise Managed Services
Though not growing as fast as consumer, the enterprise business remains strong globally, particularly managed services. More and more major corporations are entrusting Hughes to manage all of their network facilities, including terrestrial DSL, fibre, and wireless, with turnkey contracts backed by high quality service level commitments. A good example is BP Corporation Inc., which signed an extension for HughesNet Managed Network Services, connecting BP’s retail locations in the United States and in the United Kingdom, Spain, the Netherlands, Austria, Luxembourg, Switzerland, and Germany. The five-year extension is for more than 16,000 current retail locations, including implementation of new sites as they come on line. Hughes now has over 200,000 sites under managed service contracts globally with major corporations, the largest customer being GTECH, the world’s leading lottery gaming company. Plus, U.K.-based Avanti Communications Group plc signed a multi-year framework agreement in October valued at US$24 million, whereby Hughes Europe will supply eight gateways and 50,000 customer premise terminals to operate over HYLAS, Europe’s first dedicated, high-throughput Ka-band broadband satellite to be launched in 2010. In addition, Hughes agreed to acquire capacity on the HYLAS satellite to expand its managed services offering to major European corporations.

Closing the Digital Divide
Internationally, Hughes is continuing to help close the digital divide and bring broadband to rural communities on every continent, with notable wins in Brazil, India, Spain and Mexico. In India, a successful public-private partnership continues to expand distance learning and e-governance programs to thousands of rural locations. Earlier this year, the rapid implementation of a Hughes satellite-based network enabled Telefonica to provide a high quality and cost-effective communications service to meet its Universal Service Obligation under Spanish law. Our Brazilian operating company, Hughes do Brasil, was selected for the WISE (World Innovation Summit for Education) Award for a distance learning project developed for the Education Department of the State of Amazonas, which provides interactive distance learning over satellite to more than 20,000 students in 700 classrooms across 300 schools in the State of Amazonas.

Emergency Preparedness for Governments and Business
Emergency preparedness networks are being recognized universally as imperatives for business and government organizations alike. When a disaster strikes and ground networks are most vulnerable to be knocked out, robust and expedited broadband connectivity via satellite is essential to keep operations alive and to coordinate rapid decision-making. Examples in the U.S. that use the high-speed, bandwidth-on-demand capabilities of SPACEWAY 3 are the Inter-Government Crisis Network, which instantly connects different federal, state and local agencies in an emergency, and America’s Emergency Network (AEN), which is a Florida-based service that disseminates real-time evacuation and safety-related information to residents in the face of hurricanes. Our recently introduced HughesNet Emergency Business Internet service plan provides any enterprise or government agency with robust and affordable satellite backup connectivity, featuring download speeds of up to 5 Mbps and uploads speeds of up to 1 Mbps. 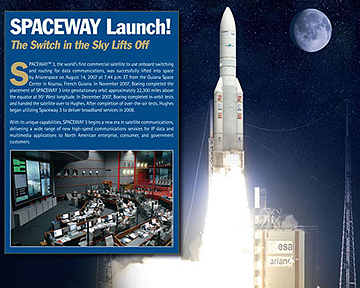 Hughes recognizes that technology yardsticks keep moving each year, and investment in new technologies, products and services is critical to our continued success. This year we took a quantum step beyond incrementally advancing our broadband network components, products and systems to meet the ever-increasing future demand for more speed and more services. In June we initiated development of Jupiter™, our next generation, high-throughput, Ka-band satellite system. Planned for launch in 2012, Jupiter will have over 100Gbps capacity, 10 times that of SPACEWAY 3, and 100 times that of conventional Ku-band satellites, and will use an enhanced version of the IPoS standard, the world’s leading broadband satellite standard approved by ETSI, TIA and ITU standards organizations. Soon thereafter, we signed an agreement valued at more than US$100 million with Barrett Xplore Inc., Canada’s largest rural broadband provider, under which they committed to acquire and operate over 10 Gbps of capacity on Jupiter. Barret Xplore is already providing service in Canada over our SPACEWAY 3 satellite.

From technologies, to products, to services, Hughes is all about broadband. As the results of 2009 continued to show, innovation and diversity is what sets us apart from the competition and keeps us strong in both good times and bad — and indeed is what drives our business success.