Several weeks after I helped submit a proposal for the first funding round for the American Recovery and Reinvestment Act (ARRA) Broadband Stimulus, a moderator on a SATCOM webinar for which I was a panel participant asked me to respond to a statement from a state legislator that SATCOM was not the way to go in disseminating broadband to the unserved and underserved areas of the nation.

This is a common theme. SATCOM has been around long enough to have evolved through several iterations and to have grown a very large user base. The majority of users become familiar with the idiosyncrasies of the consumer products, and those who learn more than the rest adjust their service or change vendors to obtain the plan that meets their needs.

The politicians don’t hear the success stories. They hear the complaints, mostly from residential customers, that largely result from a SATCOM firm promising an utopian vision, but delivering a product that that’s useful only when you don’t need it. We saw this in the housing industry. Mortgage lenders ignored good customer service by promising one thing and delivering another. Call it the glossy brochure — promise the stars, and deliver whatever.

We quickly saw how residential plans worked — or rather didn’t work — for business. Residential plans have high contention rates, no minimum bandwidth, power too low to punch through a cloud, and latency that renders voice over IP useless. As a result, these residential plans are inadequate for business use. Following the needs of our customers, we decided to deliver on the promises of the glossy brochure.

I give the SATCOM industry the same charge I gave to the webinar participants: educate our leaders and communities about satellite technologies today that can be the broadband technologies the country needs. Our nation faces a critical debate on how best to connect the least connected. The SATCOM industry needs to step up and lead the campaign to jumpstart our fellow citizens’ entrepreneurial zeal.

The sheer scale of our country is key to the debate. I can’t help but laugh when I see the USA ranked in a broadband comparison with other countries. Japan’s average broadband is 12 times faster than ours, but their population density is 10 times the population of the U.S. Twenty percent of Americans are rural, but 98 percent of the U.S.’s land mass is rural. We have 60 million people spread across 3.7 million rural square miles. Is it any wonder that a small wealthy nation’s fiber penetration is higher? I’d like to see a comparison between Japan and just our urban population. 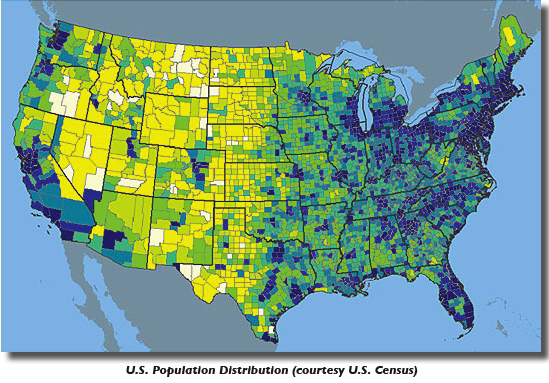 The tipping point will be how quickly a broadband solution can be widely disseminated, the degree to which that solution is able to be switched easily with future technologies, and whether that technology can help sustain the community from the first day, and years beyond the funding period. Let’s look at several potential solutions.

Fiber optic is the big pipe solution. At gigabit speeds, what’s not to like? Fiber delivers everything at high speed and volume. The major intercity connections are fiber, and it’s available to the HQs of all the Fortune 500, and many of their employees. But is it available to everyone in metropolitan areas, let alone in the surrounding countryside? No, it is not. Which is why cable and satellite TV retain high popularity. Copper is king, and one-way satellite is a good second.

The major stumbling blocks for fiber are time and money. Laying fiber is similar to other terrestrial solutions. It can be strung on poles, which is faster, but vulnerable to harm. It can be buried in several different ways, the less vulnerable methods being the most expensive, due to depth and concrete conduit. The cost of laying fiber ranges from thousands of dollars per mile to many tens of thousands, depending on method and terrain. Add up the miles, pretty soon you’re talking real money.

Let’s suppose that fiber is the only technology chosen for the broadband stimulus. We’ll string it on poles at US$10,000 per mile, regardless of mountains, plains or cities. And suppose we only run the fiber along the 200,000 miles of highway the Federal Highway Administration says are major truck routes (just two percent of the 8 million miles of paved roadway). And say that the 10 percent of the roads that are urban highways already have fiber. So you’re talking less than two billion dollars to string that fiber. This is just laying fiber along major transportation routes. Not to the homes, businesses and schools where it’s useful. 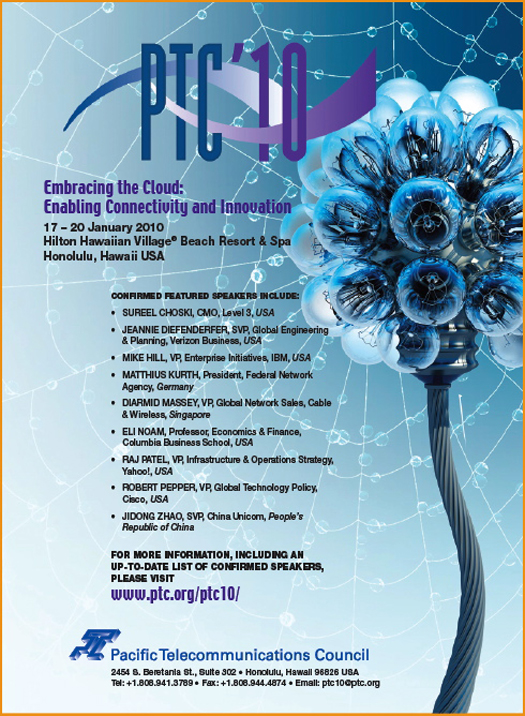 Now look back at that 8 million mile figure. To get fiber to every household, you’d be looking at some large percentage of that. Using an average cost of US$10,000 per mile, the cost to string fiber balloons to US$80 billion. And that doesn’t include the cost of making 125 million splices to connect all the homes.

The second factor that makes fiber a questionable solution is time. Laying fiber across the nation, to all unserved and underserved homes, would take many years.

So, what do we do? Well, even though it’s expensive, fiber does have its place. We spend a billion or two stringing fiber to key places, such as every educational institution within reach of the major fiber highways. Copper and various wireless technologies are also pretty good solutions for broadband last mile. Copper was the first technology to make distant communications possible, and it remains the most frequently used technology for the last mile.

Time is short. An economic stimulus means you get help today to create growth tomorrow. You can’t wait five years for that stimulus effect. We need it now.

Microwave point to point (PTP) communications was the state of the art transcontinental telephone technology for several decades. It’s part of several ARRA applications and is a technology deployed across the country for middle mile links.

But at what cost? Were we to price each tower at US$250,000, supplying PTP links at the practical limit of every 40 miles, which requires flat terrain, PTP runs US$6,250 per mile. PTP microwave is still a very expensive way to implement widespread broadband with lower speeds than fiber can provide.

So, what of satellite? Satellite would be the middle mile sweet spot due to what’s in geosynchronous orbit. Crucial to the military and television for decades, satellite’s ubiquity is its biggest competitive advantage.

However, installing satellite dishes at every point of use across the nation would have several problems, including type, installation and service costs. Of residential and commercial grades, the residential is the only grade known to most people. Residential grade two-way satellite was devised on the premise that it shouldn’t cost much more than satellite TV. The resulting cost structure means that the antenna is too small, the transmitter, receiver and modem are anemic, and the service is over promised and under delivered. High latency and subscription rates aggravate users as much as the lack of minimum speeds. Where residential grade fails in level of service, commercial grade satellite is overkill. We need a middle ground. 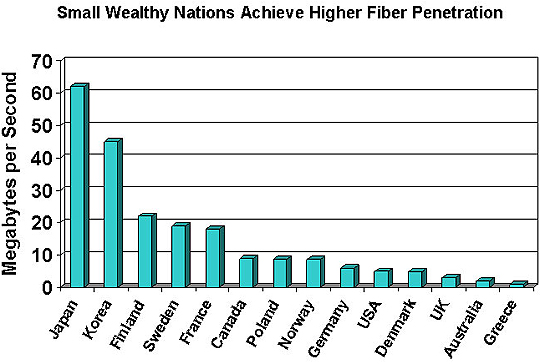 We need a solution that’s fast, recyclable, and sustainable. In conversations with a prospective community partner which has close to 200,000 people spread out over 24 thousand square miles, we needed a solution that could be deployed rapidly, cover vast amounts of territory, without breaking the bank. We needed a best-of-breed hybrid solution.

We’re all familiar with Wi-Fi solutions at coffee shops and airport terminals. Wi-Fi has long been heralded as the solution to replace copper or fiber everywhere. But Wi-Fi technology creates hotspots that are relatively small, so still requires a lot of copper or fiber to connect the hotspots. 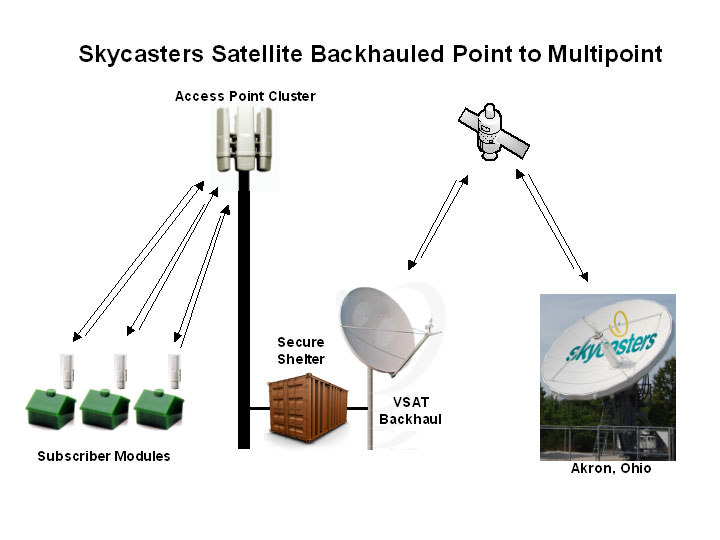 Along comes WiMAX. Similar to Wi-Fi, but with a longer range (three to eight miles), and higher speeds (70 megabit), it’s a recent development. When Skycasters considered how to help the community with their ARRA application, we thought why not service each of the 110 towns in this community with a series of WiMAX towers, each backhauled with a satellite dish?

This would be a fast solution, because once we had the site approvals and funding, we could erect a tower and dish, and install user modules all around town, in less than 90 days.

It would also be a recyclable solution. When fiber becomes available in the town, it can be connected directly to the WiMAX tower to provide the backhaul. When that occurs, these towers retain the last mile advantage. At the moment of the fiber connection, the satellite dish stands down, but remains connected as a backup solution to the terrestrial connection.

This solution enhances the community’s sustainability with revenue generating opportunities. The community could realize a percentage of the monthly subscriber revenue to either support a local service team, or as credits to offset use by emergency services or schools.

Members of the community would also have access to both consumer and business grade plans. Consumer grade means you pay less to get less, but it’s necessary to provide an entry option. Commercial grade means users get guaranteed minimum bandwidth. So like Skycasters’ normal satellite customers, the residents of unserved or underserved communities can reasonably expect that making a phone call or sending an email will work the first, second and hundredth time. When consumers have access to the ability to upgrade from a residential grade to a commercial grade, the adoption rate of the higher grade will be high.

Our industry wants to provide stimulus to the U.S. via broadband Internet. SATCOM used to be the expensive option. Not now. Advances in both the satellites themselves and in data compression have made satellite broadband the Internet solution to beat. Satellite is more than primary connectivity. It’s commercial grade equipment and service plans, and it’s WiMAX backhaul.

Educating federal, state and local decision makers across the United States will make the difference between stimulating growth now, and prolonging the recession.

About Skycasters
Skycasters is the leader in broadband satellite Internet solutions for businesses that need more than traditional terrestrial landlines. Everything in Skycasters’ infrastructure, including teleports, hubs, and the network operating center, is business-grade and company-owned. Even the equipment at your community or business location is business-grade, and designed to meet the unique challenges of your industry, no matter how rugged the conditions. Skycasters’ 24/7 tech support and customer service in-house experts can resolve any issue that may arise.