Earlier this month, ViaSat announced that it was acquiring WildBlue Communications for $500 million, net of cash acquired. Given that ViaSat itself isn’t really all that much bigger, with an enterprise value in the US$875 million ballpark, this is clearly a big deal for them. But is it the right deal? And are there other winners and/or losers? Let’s see!

First, let’s look at the numbers. With adjusted EBITDA of US$76 million, the deal comes in at a 6.6x multiple (not including tax effects) — significantly lower than the trading multiples for the big fixed-satellite services firms. Of course, with EBITDA margins in the high 30s and growth rates of 20 percent+ annually, WildBlue is a pretty different animal, so some multiple compression is probably appropriate. But, (as we discuss below) we don’t think that’s the whole valuation story. For ViaSat, pricing the deal at this level allows it to be accretive to earnings from day one.

Next, let’s consider the fit. For ViaSat, vertically integrating with their principal customer for their DOCSIS satellite modem product helps secure a long term stream of business. In addition, ViaSat gains WildBlue’s brand and marketing relationships that have enabled it to garner a subscriber base of over 400,000 — saving ViaSat tens of millions in startup marketing expense. And then, of course there’re the subscribers themselves. From WildBlue’s perspective, this deal addresses their long standing concern about how to secure financing for a follow-on satellite — ViaSat-1 becomes that satellite. It also addresses the threat posed by ViaSat’s pending entry into the market with a technically superior satellite — an entry that promised to make it hard for WildBlue when it had to compete with its principal vendor, and arch rival, Hughes, simultaneously.

Finally, it addresses a capital structure where the lion’s share of WildBlue’s cash flow was going for debt service, leaving little excess cash to return to shareholders. For all of these reasons, we think ViaSat had a strong negotiating position in its talks with WildBlue, which in turn drove the valuation for the deal.

Finally, consider how this affects other players. The first company that springs to mind is ViaSat and WildBlue’s arch-competitor, Hughes Communications. Hughes is a vertically integrated provider of satellite broadband (like WildBlue) and a provider of hardware and turnkey satellite networks (like Viasat). Hughes operates its own satellite, like WildBlue, and has a new Ka-band satellite on order, like ViaSat.

Clearly, the folks at Hughes would have liked to have gotten their hands on WildBlue, as much to deny it to ViaSat as to get it for themselves. While at first blush, the fit between Hughes and WildBlue would not appear to be as strong for it as for ViaSat, over time, WildBlue’s bent-pipe satellites could have had their customer bases gradually migrated to Hughes’ equipment. With all this said, Hughes’ shareholders clearly didn’t mind — the stock had no discernible reaction to the deal announcement. We think this indicates that the market views the downside from a strengthened ViaSat to be balanced by the neat competitive landscape of duopoly, as compared to a wild and woolly three-way horse race.

How did WildBlue’s investors do? With a total of US$453 million in equity plus US$350 million in debt, clearly not everyone is being made whole with ViaSat’s US$568 million of cash and stock. However, if we note that earlier investors were crammed down during the December 2002 raise (US$247 million in prior investment became ~$50 million in pre-money valuation), then the equity investors since then ($206 million in all) probably received most of their money back, if a few years later then when they originally made their investments. 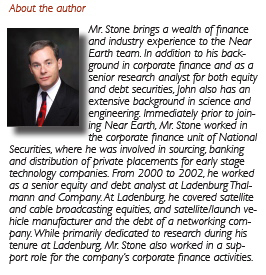 What about the future? Does this transaction portend future tie-ups? Considering that the ViaSat-1 satellite is a collaborative effort with Telesat (which also collaborated with WildBlue on their first satellite, by the way) and Loral, we think these companies are starting to get pretty chummy, and may just wake up at one point with a desire to get closer still.

A move in that direction could then force Hughes to seek a suitor as well. We could also envision the trend of the modem manufacturers vertically integrating with the service providers and launching their own satellite capacity continuing globally — so the folks doing satellite broadband outside North America could become targets as well.