Though our planet has long reminded us of its dynamic, unpredictable, and forceful nature, the past 18 months have been particularly painful for human civilization. It seems like one global disaster has followed another, with dire consequences for millions of people.

The Port-au-Prince earthquake. The Chilean earthquake. Iceland’s Eyjafjallajökull volcano. The BP Deepwater Horizon oil spill. The heat wave and fire season in Russia. The monsoon floods in Pakistan. The earthquake in Christchurch, New Zealand. Flooding in Australia. Mudslides and floods in Sri Lanka, Bolivia, Brazil, and Thailand. The historic earthquake and tsunami in Japan. And most recently, the record-setting tornado outbreak in the southern U.S. and the flooding along the Mississippi River. 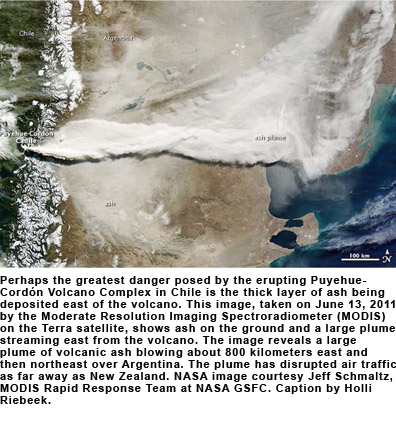 Michael Goodman has had a busy and sometimes difficult 18 months. An atmospheric scientist by training, Goodman also serves as NASA’s manager for Natural Disasters Applications. Working with basic researchers, engineers, and applied scientists, he helps assemble and coordinate the agency’s response to natural disasters and hazards. He is based at NASA’s Marshall Space Flight Center in Alabama, which recently suffered damage from tornadoes.

NASA’s Earth Observatory caught up with Goodman to learn more about this behind-the-scenes work at America’s space agency.

Earth Observatory (EO)
What is NASA’s role in observing and monitoring natural disasters, such as earthquakes, fires, floods, and volcanoes?

Michael Goodman
Our role is to provide spaceborne and airborne observations and data analyses that can assist in damage assessment and aid in the recovery. NASA works closely with several federal agencies — including the U.S. Geological Survey (USGS), the National Oceanic and Atmospheric Administration (NOAA), and the Department of Homeland Security (DHS) — to provide imagery and data analyses for use by first responders to a disaster. Within NASA’s Earth Science Division, the goal of the Natural Disaster Application Area is to use our capabilities to improve natural disaster forecasting, mitigation, and response. 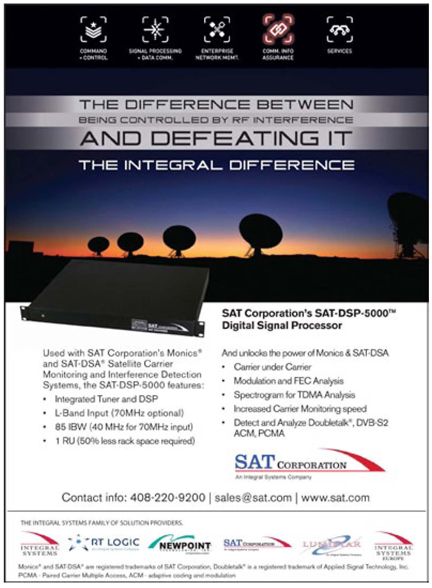 EO
What is NASA doing to help with the floods along the Mississippi River?

Michael Goodman
NASA is providing the Federal Emergency Management Agency (FEMA) with daily flood mapping images of the Mississippi River. The images are being produced through a joint applied sciences project between NASA’s Goddard Space Flight Center and the University of Colorado/Dartmouth Flood Observatory. The flood maps from the Moderate Resolution Imaging Spectroradiometer (MODIS) provide a large-scale, birdseye-view of the entire region affected by the floods. FEMA is using the MODIS mapping products and images from the Earth Observing-1 satellite to monitor the areas affected and to help guide response and mitigation efforts.

EO
What kind of assets does NASA have to address natural hazards?

Michael Goodman
Clearly our most important asset is our dedicated scientists and engineers, who use their knowledge and experience to analyze images and data and to develop and apply innovative techniques for studying natural hazards. While our satellites are continually making observations, our scientists work around the clock during disaster events to process data and aid in the damage assessment, mitigation, and recovery.

EO
What kind of hardware assets does NASA have to monitor and study natural hazards? 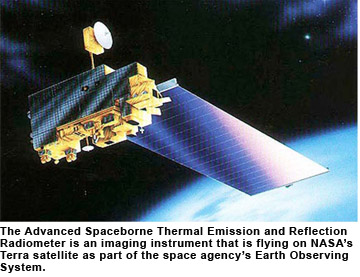 Michael Goodman
We have many satellite and plane-based sensors, including:

– The Moderate Resolution Imaging Spectroradiometer (MODIS), on both the Terra and Aqua satellites, provides natural and false-color images of flooding and fires

– The Advanced Spaceborne Thermal Emission and Reflection Radiometer (ASTER) on Terra is a high-resolution, steerable radiometer that views the Earth in the visible, near infrared, shortwave infrared, and thermal infrared portion of the spectrum

– The Ozone Monitoring Instrument (OMI) on the Aura satellite can distinguish between aerosol types, such as smoke, dust, and sulfates

– Hyperion is a high-resolution hyperspectral imager on Earth Observing-1 (EO-1) capable of detailed land classification, such as identifying damaged areas following the tsunami and earthquake 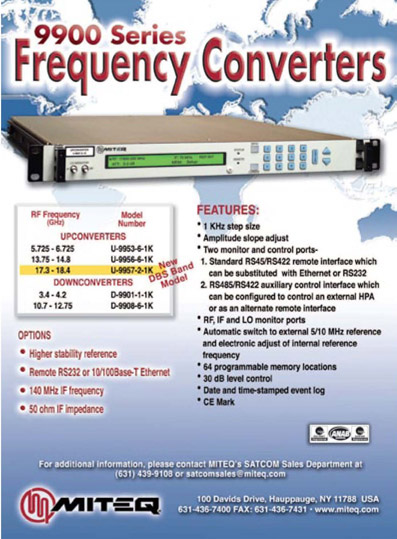 – The Precipitation Radar and Microwave Imager on the Tropical Rainfall Measuring Mission (TRMM) help researchers see the precipitation that leads to extreme rainfall, floods, and landslides

– The Autonomous Modular Scanner incorporates sophisticated imaging and real-time data communications in an instrument on unmanned and manned aircraft to observe smoke and haze, to record hot spots, and to monitor the progression of wildfires

– The Advanced Visible InfraRed Imaging Spectrometer (AVIRIS) is an airborne optical sensor that observes transmitted, reflected, and scattered sunlight and was used extensively during the Deepwater Horizon oil spill

– The Uninhabited Aerial Vehicle Synthetic Aperture Radar (UAVSAR) is an airborne radar system that can detect and measure subtle changes in Earth’s surface caused by natural events — such as earthquakes, landslides and volcanoes — or human induced impacts — such as oil or groundwater pumping, oil spills, and deforestation

EO
How did NASA respond to the March 2011 Tohoku-oki (Sendai) earthquake and tsunami?

Michael Goodman
We had multiple spaceborne instruments that observed the areas affected. These observations and analyses were used during the immediate post-disaster assessment to map the extent of the damage. Additionally, these observations now will be applied to longer-term research of the area.

One of those instruments was ASTER, which is a cooperative effort between NASA, Japan’s Ministry of Economy, Trade, and Industry and Japan’s Earth Remote Sensing Data Analysis Center. Because the instrument has such fine resolution and can be pointed to view specific areas, ASTER was used extensively in the earthquake and tsunami analyses.

EO
Does NASA have any other role in the aftermath, such as search-and-rescue and environmental monitoring? 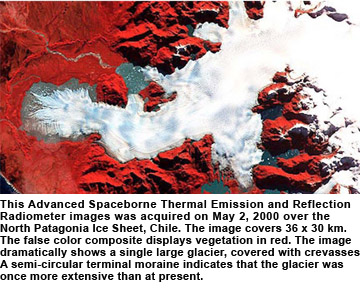 Michael Goodman
NASA does not have a direct role in urban search and rescue, but our data sets and analyses are useful in assessing the extent of damage. In the Tohoku-oki earthquake and tsunami, the Hyperion, ALI, ASTER, MISR, and MODIS instruments were all used to determine the extent of the earthquake damage and the scope of the tsunami inundation. They also monitored the fires and resultant smoke plumes. Many of these same instruments will make repeated observations over the coming months to monitor the area during the recovery period.

Michael Goodman
Our science instruments are designed for climate change research and for studying a wide range of environmental issues, as our planet is changing on all scales of time and space. Although our instruments do not have the high spatial resolution of commercial satellites, we do have a suite of instruments that can be used for broader and more frequent hazard assessment. The swath width of MODIS is 2,300 kilometers, which enables it to cover almost the entire Earth every day. And we are fortunate to have two MODIS instruments, so we can revisit a disaster site a combined four times a day (nighttime and daylight for each satellite) enabling frequent daily monitoring. Even the higher resolution (but smaller swath) MISR and ASTER provide much broader coverage than commercial satellites, which is key for providing continuous environmental monitoring. 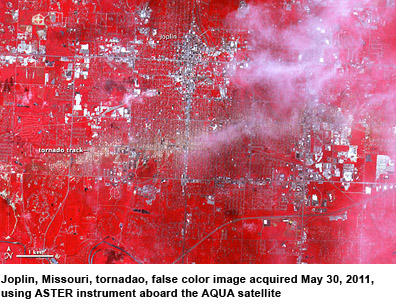 In addition to the broad swath width and spectral range, we also have an extensive archive of historical data that enables us to detect changes before and after an event. Some of NASA’s instruments have been flying for more than a decade.

EO
On a personal note, how did the recent tornado outbreak affect you?

Michael Goodman
My house is fine. We were without power for five days, and rotting refrigerated food and cold showers get old quickly. But these are minor complaints compared to the many people in our area who lost everything. Tornado damage in the Huntsville area was very bad.

For further information and additional imagery, head over to NASA’s Earth Observatory, located at:
http://earthobservatory.nasa.gov/ 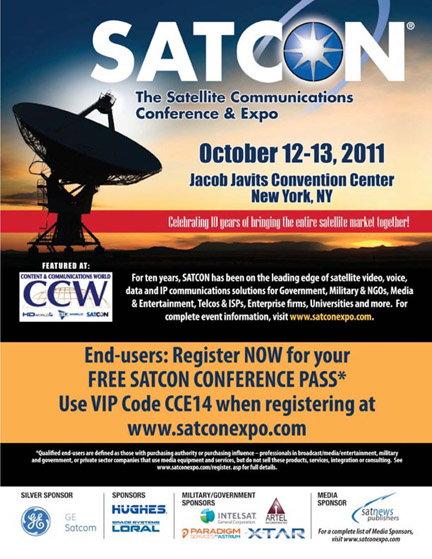