A growing trend in SATCOM and radar systems in the aerospace and defense market is the need for increased signal and analysis bandwidth and processing gain. SATCOM systems are being driven by demands for increased data rates, while modern radar systems require more processing gain to improve range resolution, which in turn drives wider modulation bandwidths. Modern radar systems also employ more complex pulse modulation signal formats to improve range resolution and lower the probability of intercept and jamming. Many radar and SATCOM systems operate at microwave frequencies (e.g., X-, Ku- and Ka-bands), which helps to support wider modulation bandwidths, increased capacity, and also offers the benefit of smaller antennas.

In some cases, the wide bandwidths required exceed the intermediate frequency (IF) bandwidths of commercially available RF spectrum analyzers and vector (or FFT) signal analyzers. Coupled with the higher operating frequencies, this creates a significant set of challenges for RF engineers testing radar and SATCOM transmitters.

Quickly, accurately and cost-effectively measuring the performance of RF/microwave transmitters in today’s radar and SATCOM applications is a challenging task. In some cases (e.g., to measure a SATCOM transmitter’s Error Vector Magnitude (EVM)), the transmitter output can’t always be measured directly. Engineers often have to rely on custom-built down-converter hardware to down-convert the RF/microwave frequencies to an IF frequency that can then be measured with commercial off-the-shelf (COTS) test equipment. Unfortunately, the non-recurring engineering costs associated with designing, building and testing the hardware can be counterproductive. 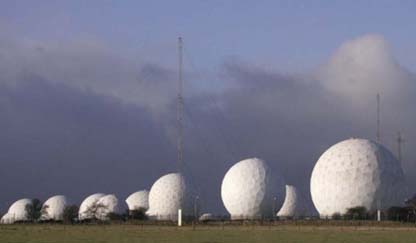 The down-converter hardware also adds its own RF impairments that can mask the actual performance of the RF/microwave transmitter under test. Moreover, distortion may occur that contributes to the overall EVM being measured, making it difficult to discern how much EVM is from the actual transmitter output. With no other available option, many RF engineers are left with the measurement accuracy uncertainty that comes from this less than ideal approach.

The answer to this dilemma lies in finding a solution that enables direct measurement and analysis of the RF/microwave transmitter’s output, without the need for custom down-converter hardware. An ideal solution for this task is the wide-bandwidth oscilloscope, which can directly measure and analyze X-, Ku- and Ka-band signals (up to 32 GHz) from today’s radar and SATCOM transmitters.

Using the wide-bandwidth oscilloscope eliminates the time and cost associated with use of custom down-converter hardware as well as relieve the engineer from having to deal with other issues such as hardware calibration, corrections for system impairments, and uncertainty in measurement results. 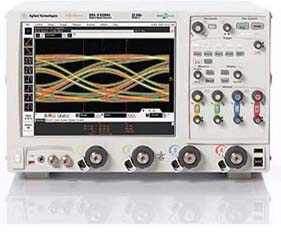 Other aspects of wideband radar and SATCOM measurements that typically pose some level of difficulty for RF engineers include:

- Creation of custom/proprietary wide-bandwidth signals. Traditionally, creating such signals for transmitter testing has been difficult since often times they are not supported with COTS equipment. As a result, engineers are forced to develop custom test equipment, a costly and time-consuming proposition.

- Analysis of custom/proprietary wide-bandwidth signals. Radar and SATCOM signal formats may be custom or proprietary, and may require some level of custom signal analysis.

Finding a COTS test solution that can create and analyze custom/proprietary signals with integrated software is, therefore, of paramount importance. 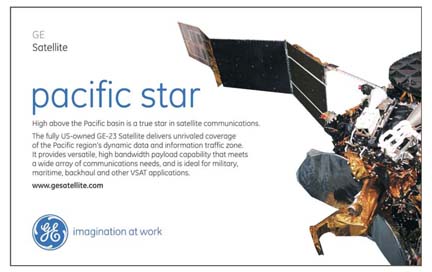 The 81180 is a 12-bit wide-bandwidth AWG, operating from 10 MS/s to 4.2 GS/s. The PSG signal generator features wideband IQ inputs. When combined, these two instruments provide the flexibility necessary to create custom/proprietary radar signals and wideband modulated signals (e.g., QPSK and 16QAM) for SATCOM applications. These signals can be used for device under test (DUT) testing in the lab environment, without the need for costly custom test equipment. 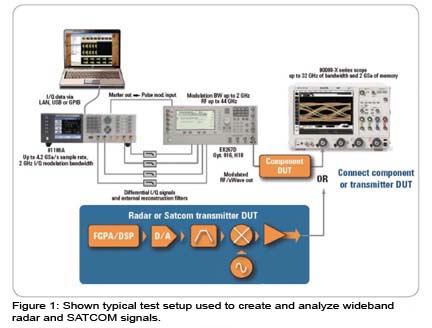 While the 81180 features excellent spurious free dynamic range like its predecessor the N6030A/N8241A AWG, it also extends the I/Q modulation bandwidth to 2 GHz to accommodate today’s wideband radar and SATCOM signals. When used for component DUT testing, the 81180 generates wideband IQ signals that are fed into the PSG’s wideband IQ inputs. The PSG then generates the microwave test signal that will be used as DUT stimulus. Next, the DUT’s output is connected to the 90000X oscilloscope where the radar and SATCOM measurements are made (Figure 1). To measure a standalone transmitter, the RF engineer simply connects the oscilloscope directly to the transmitter output.

Creating custom/proprietary waveforms and performing custom/proprietary measurements on radar and SATCOM applications is a task that can be made significantly easier using MATLAB®. It can be used for signal generation to create simulated waveforms that are then downloaded to the 81180 AWG. Here, they are synthesized into differential IQ waveforms that are fed into the external I/Q inputs on the PSG signal generator. The modulated RF/microwave test signals are then generated. Custom, user-defined MATLAB functions can also be used inside the 90000X oscilloscope and applied to the trace waveform (e.g., to calculate the pulsed RF envelope) so the pulsed RF waveform envelope can be measured and displayed. Pre-configured 90000X oscilloscope measurements are used to measure the rise time, fall time, pulse width, and overshoot on RF radar pulses (Figure 2). In this case, the 90000X’s deep capture memory (2GSa) plays a critical role in allowing it to capture and analyze a large number of radar pulses. 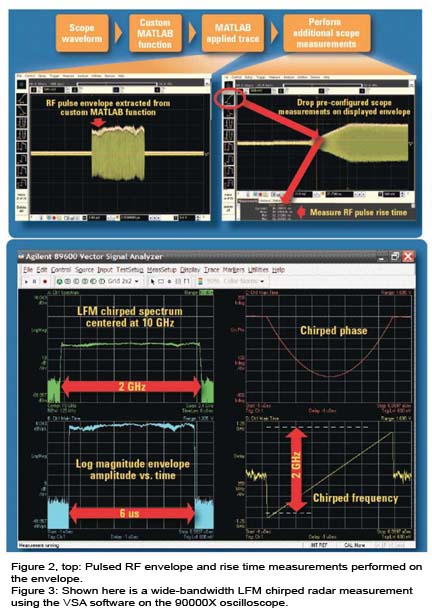 Segmented memory further optimizes the number of radar pulses that can be captured and analyzed with the available oscilloscope memory. Essentially, it enables the user to zoom in on a pulse and capture only the “ON” time of the pulse, while ignoring the “OFF” time of the pulse. Note that while segmented memory can be used with MATLAB user-defined functions, this capability is not available with the VSA software.

Easing Migration to the Oscilloscope

While spectrum analyzer and vector signal analyzers have traditionally been used for RF testing, the challenges with performing today’s radar and SATCOM measurements have become a catalyst for RF engineers migrating to wide-bandwidth oscilloscopes. Fortunately, Agilent’s VSA software runs inside the 90000X oscilloscope and helps ease this migration by providing RF engineers the best of both worlds: the functionality and user-interface of a vector signal analyzer, and access to the oscilloscope’s wide-bandwidth capabilities, which enables measurements up to 32 GHz for wideband radar and SATCOM applications.

With its familiar user-interface, the VSA software enables RF engineers to specify traditional RF parameters (e.g., frequency span and resolution bandwidth) on the oscilloscope. It then processes the data from the oscilloscope and displays the digitized results using vector signal analyzer amplitude and phase displays. VSA software can also perform frequency-domain analysis to measure characteristics like the RF/microwave spectrum, frequency and phase characteristics (e.g., chirped phase and frequency or frequency hopping characteristics displayed on a RF spectrogram), and EVM (Figure 3). In addition, the VSA software supports many signal standards and modulation types, to demodulate signal formats such as QPSK, 16QAM and 64 QAM for SATCOM and other applications. Such analysis provides the engineer with greater visibility into the actual radar and SATCOM transmitter hardware performance. 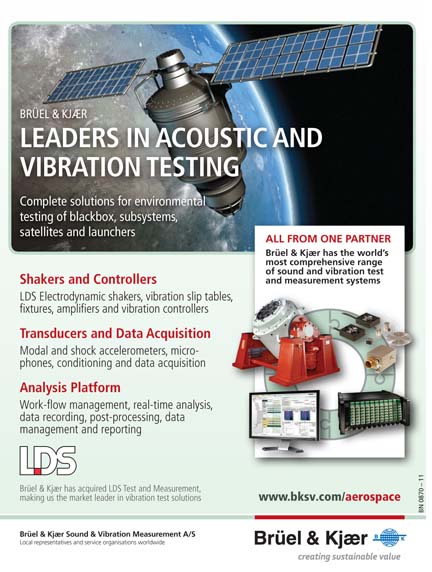 The oscilloscope can be combined with the 81180 AWG and PSG signal generator, which together can create and analyze physical test signals. Custom/proprietary signal waveforms can be generated using MATLAB and then downloaded to the 81180 AWG, combined with a PSG signal generator, to create the test signal. With the 90000X oscilloscope, the transmitter’s output can be measured using Agilent’s VSA software, a MATLAB user-defined function or the oscilloscope’s built-in time-domain analysis capabilities. With today’s radar and SATCOM applications employing wider bandwidths and higher frequencies, direct and accurate measurement of the transmitter’s output using the 90000X oscilloscope has become essential in gaining insight into the transmitter’s true performance, saving time and helping to mitigate costly design re-work.

For more information on Agilent Technologies’ products, applications or services, please contact your local Agilent office. The complete list is available at: http://www.agilent.com/find/contactus

Mike Flaherty is an RF/µW Applications Engineer in Agilent Technologies US Southwest District.  Over his 30 year career with Hewlett-Packard / Agilent Mike has contributed to the development, applications and metrology of spectrum / signal analyzers, signal sources and arbitrary waveform generators.  Mike has authored various software products, application notes, white papers, journal articles and sections of customers’ websites.  He graduated from University of California, Berkeley and DeVry Institute of Technology.  He can be reached at mflaherty@agilent.com.

Thomas Dippon works as a strategic product planner for pulse, function, and arbitrary waveform generators. In almost 20 years with Agilent/HP he had several positions in R&D, technical support and project management. Thomas is based in Boeblingen, Germany. 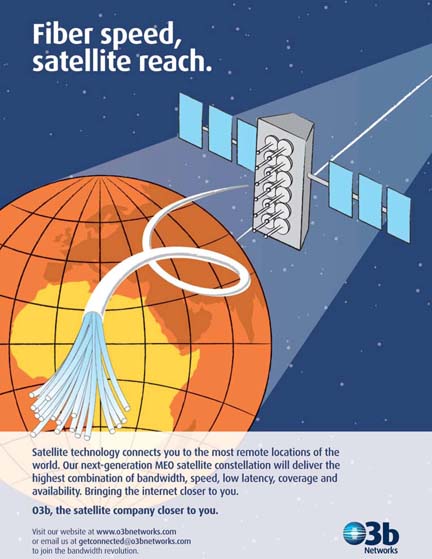