“Space is in the news more than ever. With both Iran and North Korea developing space programs, and with both the United States and China demonstrating new capabilities to shoot down satellites, international concerns for space security have never been greater. In the Space Security Index, policy makers, journalists, and technical professionals, as well as those just interested in space, have a single reliable resource for information on space security. There is no more comprehensive and up-to-date source of information on developments in space, and the threats to space security.” — Hon. Philip E. Coyle, Senior Advisor, Center for Defense Information, Former Assistant Secretary of Defense and Director, Operational Test and Evaluation, U.S. Department of Defense

This article excerpts material from the sixth annual report on trends and developments related to security and outer space, covering the period January to December 2008. The report itself is part of the wider Space Security Index (SSI) project that aims to improve transparency with respect to space activities and provide a common, comprehensive knowledge base to support the development of national and international policies that contribute to space security. The definition of space security guiding this report is in keeping with the express intent of the 1967 Outer Space Treaty that space should be preserved as a global commons to be used by all for peaceful purposes:

The secure and sustainable access to, and use of, space and freedom from space-based threats. 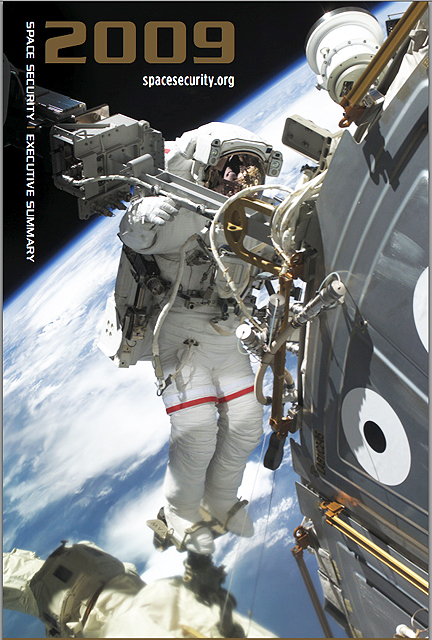 Space Security 2009 does not provide absolute positive or negative assessments of 2008 outer space activities. Instead, the report indicates the range of implications that developments could have on the security of space across the various indicators and highlights the difficult challenges faced by policymakers.

The Space Environment
Trend 1.1: Growing risk to spacecraft as orbital debris continues to increase — Traveling at speeds of up to 7.8 kilometers per second, space debris poses a significant threat to spacecraft. The number of objects in Earth orbit has increased steadily; today, the U.S. Department of Defense (DOD) is using the Space Surveillance Network to track more than 19,000 objects approximately 10 centimeters in diameter or larger. It is estimated that there are more than 300,000 objects with a diameter larger than one centimeter, and millions smaller. The annual growth rate of new debris tracked began to decrease in the 1990s, largely due to national debris mitigation efforts, but has accelerated in recent years.

2008 Developments
With no major on-orbit fragmentations in 2008, there was minimal additional risk by new debris, but existing debris continues to pose hazards to operational spacecraft, particularly in Low Earth Orbit (LEO). Concerns are also raised by intentional satellite breakups, as well as the ongoing presence in orbit of satellites with a history of severe fragmentation.

Although relatively little lasting debris was created, the U.S. destruction of the failed USA-193 satellite prior to its reentry in Earth’s atmosphere raises a
challenge for space security in which the sustainability of the space environment can potentially conflict with security from threats posed by objects in space.

TREND 1.2: Continued efforts to develop and implement debris mitigation practices — Significant on-orbit collisions, such as the collision of the French military satellite Cerise with a portion of an Ariane rocket in 1996, and improved tracking abilities have encouraged the recognition of space debris as a growing threat. Since the mid-1990s, many spacefaring states, including China, Japan, Russia, the U.S., and the European Space Agency, have developed debris mitigation standards, and the United Nations has adopted voluntary guidelines.

Reporting by some states on efforts to implement the Debris Mitigation Guidelines of the U.N. Committee on the Peaceful Uses of Outer Space (COPUOS) and evidence that some states are factoring the guidelines into decision-making are positive signs that the Mitigation Guidelines are becoming part of state practice. However, responsible actions by a few spacefaring states will not guarantee progress in reducing the creation of space debris. In particular, efforts are needed to make emerging and developing space states aware of the consequences of space debris and their international responsibilities, and to help them develop the technical means to meet those responsibilities. Finally, while the U.S. asserts that it adhered to the guidelines when destroying the de-orbiting USA-193 satellite, it is not clear how other states may engage in similar actions over the long term.

TREND 1.3: Space surveillance capabilities to support collision avoidance slowly improving — Efforts in the 1980s to create an international space surveillance system to support collision avoidance and debris reentry were unsuccessful, but several states have pursued national systems. The U.S. Space Surveillance Network uses 30 sensors worldwide to monitor over 19,000 space objects in all orbits, but since 2004 has provided limited access to its data, out of concern for national security. Russia maintains a Space Surveillance System using its early warning radars and monitors some 5,000 objects (mostly in LEO), but does not widely disseminate data. China, the EU, France, Germany, and Japan are all developing independent space surveillance capabilities. Discussions have once again been initiated about the practicalities of sharing such data.

2008 Developments
The various national efforts to improve independent space surveillance capabilities in 2008 are positive for space security because they provide better and redundant tracking of space objects and greater transparency of space activities. However, ongoing challenges to greater cooperation and collaboration include hesitancy to share information on satellites that are deemed sensitive, particularly as space surveillance information can be used to support space negation efforts; and technical difficulties associated with combining information in various formats and from different types of sensors. Consequently, the use of orbital data to adequately support collision avoidance remains limited, but events in 2008 indicate that such use may increase in the near future. 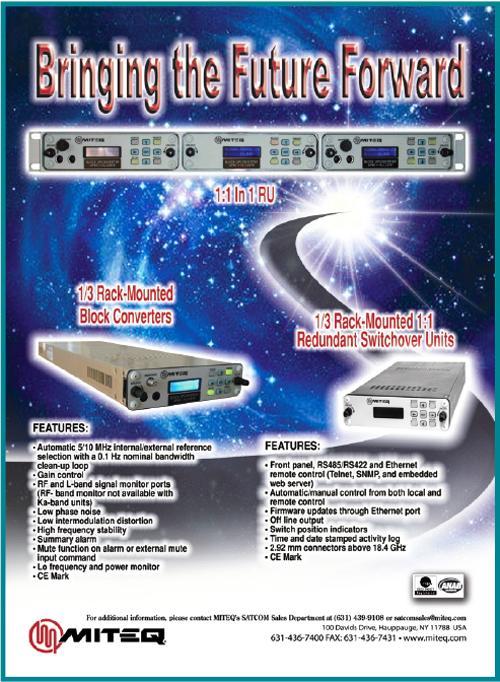 The growth in military bandwidth consumption has also been dramatic: the U.S. military used some 700 megabytes per second of bandwidth during operations in Afghanistan in 2001, as compared to 99 megabytes per second during Operation Desert Storm in 1991. There are more than 800 operational satellites in orbit today. Increased competition for orbital slot assignments, particularly in GEO where most communications satellites operate, has caused occasional disputes between satellite operators. The International Telecommunication Union has been pursuing reforms to address slot allocation backlogs and related financial challenges. 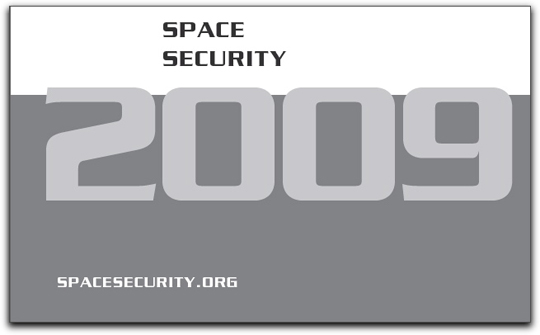 Developments in 2008 further highlight both the scarcity of available slots in the radio frequency spectrum and the challenges with the existing governance mechanisms. In particular, the Chinese plan for Beidou appears to be consistent with current ITU regulations, and efforts to resolve the issue of frequency coordination were complicated by untimely release of technical details about Galileo. Moreover, as military and economic interests drive the growth of competing systems for similar services, additional demands are also made on their related orbits — in this case, highly elliptical orbit.

Determining the nature of solutions to satellite signal interference, both accidental and hostile, will continue to be a challenge for the foreseeable future and is a significant deterrent to space security .

Commercial Space
Trend 2.1: Continued overall growth in the global commercial space industry — Commercial space revenues have steadily increased since the industry first started to grow significantly in the mid-1990s. Global commercial space revenues, dominated by satellite services, have been estimated as totaling between US$144-billion and US$175-billion in 2008. Individual consumers are a growing source of demand for these services, particularly satellite television and personal GPS devices. In recent years, Russia has dominated the space launch industry, having the most commercial launches, while U.S. companies have led in the satellite manufacturing sector. However, international competition in both of these sectors is increasing.

2008 Developments
Although the strong commercial launch industry in 2008 was in part due to the ongoing replacement of satellites, continued growth is also seen in satellite services and ground equipment revenues, driven by consumer-oriented products. Ongoing growth of the industry suggests that there is overall confidence in the security of space and the ability of both companies and consumers to continue to rely on space resources.

Further, individual consumers continue to become more significant stakeholders in space. Growing competition in the commercial launch market may contribute to space security by providing greater access to outer space, although tensions may arise if future demand for space resources such as orbital slots and radio frequencies exceeds supply. Currently, however, the positive gains in the sector’s value and ubiquity outweigh the greater friction with respect to supply and demand.

Trend 2.2: Commercial sector supporting increased access to space — Commercial space launches have contributed to cheaper space access. The cost to launch a commercial satellite into GEO has declined from an average of about US$40,000/kilogram in 1990 to US$26,000/kilogram in 2000, with prices now stabilizing. The commercial space industry is also opening up access to Earth imaging data, which until a few years ago was only available to a select number of governments.

Today any individual or organization with access to the Internet can use these services through Google Maps, Google Earth, and Yahoo Maps programs. An embryonic private spaceflight industry continues to emerge, seeking to capitalize on new concepts for advanced, reliable, reusable, and relatively affordable technologies for launch to suborbital trajectories and low Earth orbit.

2008 Developments
Sustained competition in commercial space launch may slightly reduce the cost of access to space in the near future, but in the absence of revolutionized technologies, there is not likely to be a significant impact on space access. Moreover, while efforts are being made to support private human access to space, such access may cause challenges to space security, both in terms of the sustainability of the space environment as well as the applicability of international laws, such as the Astronaut Rescue Agreement.

Finally, while the space industry is facilitating greater use of space applications, in particular remote sensing data, there are legitimate fears about the security implications on Earth of widely available imaging data.

2008 Developments
The strong relationship between military and commercial uses of space and the security dimensions of many commercial services have complex impacts on space security. On the one hand, multiple-use spacecraft could become military targets in the future, resulting in an overall decrease in security.

Alternatively, the proliferation of dual-use assets in space could make a military attack less useful and, therefore, less likely. This could increase overall space security. The focus of the year has been a constant discussion on changes that ought to be brought about in ITAR to increase the commercial competitiveness of the U.S. satellite and launch industries, specifically in the light of the ITAR-free satellites manufactured by Europe for the Chinese market. 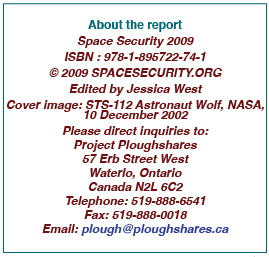