One company prefers the term “flock” to “constellation” and one might well ask how this differentiates from the more commonly used term. Both are congregations of technology, a bevy of devices that perform either a specific function or a broader range of services. 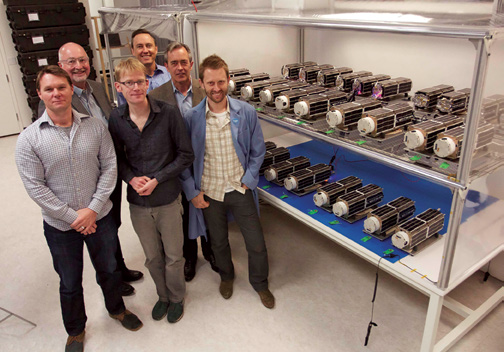 When looking at small satellite flocks, Planet Labs of San Francisco intends of launching their first flock for Earth Observation/Imagery—28 satellites scheduled for launch on January 9, 2014, aboard an Orbital Sciences’ Antares rocket 1 from NASA’ Wallops Flight center in Virginia.

The satellites arrived at the NASA facility in November of 2013 and, as of this writing, are undergoing pre-flight testing and checking. The company plans to launch 32 satellites on four different launch vehicles in 2014.

This upcoming flock comes after Planet Labs’ Doves 1 through 4, their test satellites, were launched earlier this year on three rockets. These satellites were quite successful and, in fact, their test images resulted a number of inquiries from firms that require high-resolution imagery for their operations, such as agriculture and planning companies.

The founders, pictured below, include Mr. Boshuizen who was formerly with NASA Ames and led a variety of partnership projects between NASA and private space exploration companies. He was also the co-investigator for the PhoneSat. He received his Ph.D. and B.S. degrees from the University of Sydney.

Mr. Marshall was a scientist with the NASA Ames team and also worked on the PhoneSat project as well as serving as a team member for the LCROSS and LADEE moon missions. He possesses a Ph.D. in Physics from the University of Oxford and was a Postdoctoral Fellow at Harvard University. 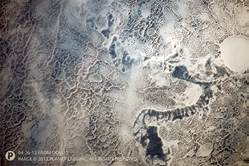 Mr. Schingler was the Chief of Staff for the Office of the Chief Technologist at NASA, managing the exoplanet mission TESS. He led NASA’s Open Government activities. He has a B.S. degree in Engineering Physics from Santa Clara University, an MBA from Georgetown and a Masters degree from the International Space University.

There are now more than three dozen employees at Planet Labs, most of them having substantial experience in the space industry, from companies such as SpaceX, SS/L , Pratt & Whitney Rocketdyne and others.

The flock will be orbiting at a much lower altitude than other satellites, with an inclination of 52 degrees to the equator in a circular orbit of 400 kilometers. This low altitude enables the satellites to capture higher resolution imagery with the on-board cameras and the data relay will be far quicker than if they were to orbit at higher altitudes.

Although these nanosatellites (nanos) have a far shorter life cycle than their larger brethren, they are also cost less to build and launch. Plus, the nanos shorter life cycle does allow for far more frequent upgrades of the platform to better the incorporated technologies, which, in turn, attracts additional customer interest.

However, the upcoming launch does require a great deal of money to accomplish the mission. Taking the latter into account, then, is anyone else interested in their goal?

Yes, as a matter of fact, there are... a number of new investors have taken Planet Labs into their pocketbooks, to the tune of some $52 million in Series B financing. Prominent money folk include:

– Yuri Miner is one of a group of billionaires in the U.S., and a co-founder of Digital Sky Technology, a Russian investment fund, to take an interest in Planet Labs. One of his early moves was to recognize that a Facebook play would be extremely worthwhile. He pumped $200 million into that company back in 2009 and then poured in another $100 million, followed by another $500 million in a partnership with Goldman Sachs, bringing the investors a 10 percent ownership of that firm.

– Venture capitalist Ray Rothrock has also involved himself, financially speaking, with Planet Labs. A member of Forbes’ Midas List in 2013, he has managed some wise and lucrative investments, including one in PGP Corporation, which was acquired for somewhere between $200 and $300 million by Symantec in 2010. His current major thrust is with the Rockefeller-founded Venrock, where he initiated the company’s Internet and energy investment strategies. One of his many successes was his work with Imperva, which ended up being the most successful IPO in the technology sector in 2011. 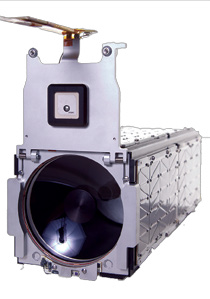 – In 2000, Industry Ventures was formed by Hans Swildens. The focus on the firm was to examine tech companies and then offer the selected companies seed stage infusions of capital. As a leading provider of venture capital liquidity, the firm now has more than a 20 fund portfolio wherein high multiple potential is the expected result. Their portfolio companies include Twitter, Pandora, Alibaba.com, Trustwave, Sojern and Uber. Venture funds include Foundry Group, Lowercase Capital, Madrona Venture Group, true ventures, Costanoa Venture Capital and IA Ventures, among others.

– Boutique venture fund company Felicis Ventures is also onboard the Planet Labs launch pad. More than 90 companies have received the firm’s investment capital, with 47 of those firms then acquired by such companies as Apple, AT&T, Disney, eBay, Facebook, Google, Groupon, Intuit, Microsoft and Twitter. The company also has more than $100 million in committed assets and, in 2006, started a $4.5 million Angel fund, a $41 million super-Angel fund in 2010, and a $70 million boutique venture capital fund that was raised in 2012. The company’s key focus is on what they analyze as new and groundbreaking technologies.

– Founded in 2000, Lux Capital identifies and backs technology companies, with a focus on helping the firms build their business via their entrepreneurial teams. The three founders — Peter Hébert, Robert Pual and Josh Wolf — have worked together for more than ten years. Their technology portfolio includes Planet Labs, Cambrios, CyPhy Works, Everspin Technologies, Evolv, Kymeta, Luxterao, Matterport, Molecular Imprints, Nanosys, Shapeways, SiBeam and Silicon Cloks (both of the latter firms have now been acquired).

The new investors join the existing funders that include DFJ, Captricorn, O’Reilly Alpha Tech Ventures (OATV), Founders First, First Round Capital, innovation Endeaors, Data Collective and AME Cloud Ventures. Quite a team of experienced money folk that see the future of small satellites as a most worthwhile endeavor.

For more information regarding Planet Labs, access their infosite: http://www.planet-labs.com