SwampSat, the first picosatellite developed by researchers in the University of Florida’s (UoF) College of Engineering, was successfuly launched into space from Wallops Flight Facility in Virginia as a payload with the ORS-3 mission. 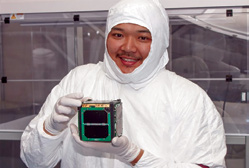 Mechanical and aerospace engineering professor Norman Fitz-Coy is the director of UoF’s Space Systems Group, which designed and built the 4-inch cube satellit, which is not much bigger than a softball and weighs just two pounds.

However, the “pico satellite” may well hold a key to a future of easier access to outer space—one where sending satellites into orbit is as routine and inexpensive as shipping goods around the world.

“Right now, the way satellites are built, they’re all large, one-of-a-kind and very expensive,” said Norman Fitz-Coy, an associate professor of mechanical and aerospace engineering and the lead investigator on the project. “Our idea is that you could mass produce these small satellites and launch 10 or 20 from a single launch vehicle.”

The satellite is the first ever built at UF and may be the first orbiting spacecraft to be built in Florida, said Peggy Evanich, director of space research programs at UF.

“There is a national push to make satellites smaller so that you can provide cheaper and more frequent access to space,” said Fitz-Coy.

As part of that push, the National Science Foundation created the Advanced Space Technologies Research and Engineering Center at the UoF College of Engineering. Headed by Fitz-Coy, the center develops “pico- and nano-class small satellites” that can be built and launched for as little as $100,000 to $500,000, according to the NSF. The UoF center will receive NSF funding for five years for the research. 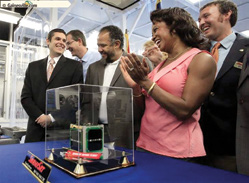 Florida’s Lt. Gov. Jennifer Carroll, standing with, from left, student Shawn Johnson, chairman of the Department of Mechanical & Aerospace Engineering, Dr. David Hahn, Dr. Norman Fitz-Coy of the Mechanical & Aerospace Engineering Department, and student Dante Buckley, visits the Nanoscale Research Facility at the University of Florida to see the softball-sized satellite, SwampSAT. Students designed the CubeSat to be a less expensive and faster way to conduct space-orbiting missions now that the shuttle program has been terminated. Photo is courtesy of the Gainesville Sun (Gainesville.com)

Fitz-Coy said small satellites are not anticipated to totally replace larger ones, but rather to complement them, by adding new capabilities. For example, he said, “swarms” of small satellites could take multiple, distributed measurements or observations of weather phenomena, or the Earth’s magnetic fields, providing a more comprehensive assessment than is possible with a single satellite.

He said the main impediment to designing small satellites is control: The smaller the satellite, the harder it is to manage its flight path and attitude, or orientation in space—for example, which directions its instruments point, a critical parameter in spacecraft design.

“It’s similar to you driving an SUV down the road or a sub-compact,” Fitz-Coy said, explaining that while inertia helps large satellites, it is not enough to keep small satellites on track and properly oriented. “The SUV is a lot more stable than the sub-compact.”

SwampSAT will test a new system designed to improve small satellites’ attitude control. Having precise control is particularly important for such satellites as they have to fly relatively close to Earth in order for their weak communications signals to reach their targets, he said. Due to their proximity to Earth, their instruments must be precisely aimed. “They need to be able to control their orientation and re-orient rapidly,” said Fitz-Coy.

The mission is using a pyramidal configuration of control moment gyroscopes (CMG) to afford precision, three-axies attitude control of the satellite in orbit. This is the first technology of its kind and was developed by UoF engineers and, if succesful, will advance the CMG’s readiness level for future CubeSats.

Fitz-Coy and 12 undergraduate and graduate students started the SwampSat project, and the recently launched CubeSat is orbiting at an altitude of between 600 and 650 kilometers, or from 373 to 404 miles, and will remain in orbit for several years, Fitz-Coy said.

The University of Florida’s infosite: http://www.ufl.edu/

Editor’s note: The preceeding SwampSat information is courtesy of the University of Florida’s infosite and Aaron Hoover of the university. 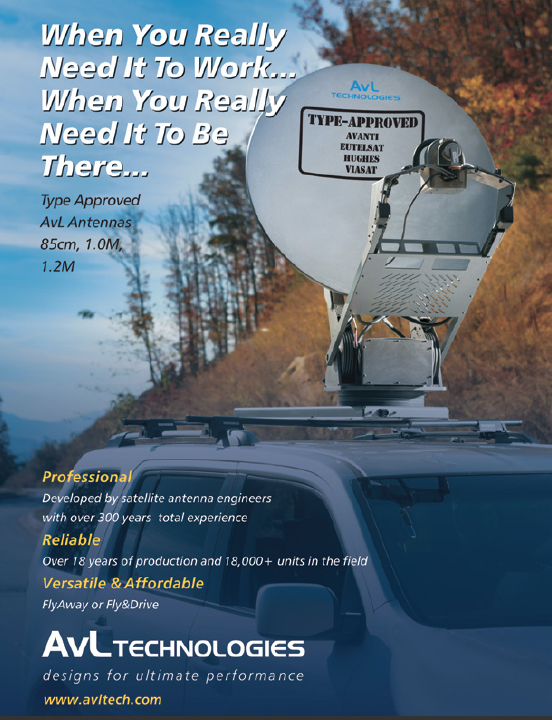