KySat-2 is the second CubeSat nanosatellite entirely designed, built, and tested by students of the University of Kentucky and Morehead State University. 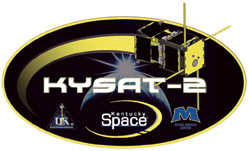 Development of the satellite began in 2011, shortly after the launch of KySat-1. KySat-2 successfully launched on November 19, 2013 out of Wallops Island, Virginia.

KySat-2 is a 1U CubeSat class satellite built by Kentucky Space LLC and includes nine parts that were Additively Manufactured (3D Printed) using Windform XT2.0 from CRP technologies, built by CRP USA based in North Carolina. These parts include:

• Deployment Extensions: Two of these are used on each spacecraft as “extender” of the ON/OFF switches which power the satellite ON when deployed from the rocket
• Battery Holders: These holding “straps” constrain the satellite batteries to structures to ensure no movement during the violent ascent into orbit
• Antenna Holders: These are four surfaces, each one is mounted to the deployable solar panels. When the solar panels are in the stowed configuration these parts hold the UHF antenna within the envelope of the spacecraft. When the panels deploy the antennas are then released which allow KySat-2 to communicate back to the Earth.
• Camera Structure: The final WindForm XT 2.0 part used was a structure that held the imaging board and lens in place and attached to the spacecraft frame. This part, like all of them, was custom from the start to perfectly fit the needs. 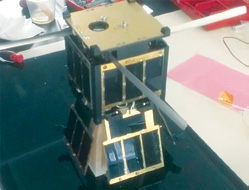 Many of the KySat-2 team attended the annual CubeSat Workshop / SmallSat Conference in Logan, Utah, for a week of productive talks, meetings and get-togethers with the CubeSat community. In the days immediately prior to the conference, the team moved the flight model through all of the environmental testing, which was a huge hurdle cleared.

The flight model then entered into a period of long-duration functional testing and the team started the build of a second flight model that could serve as a backup or be used for further testing. 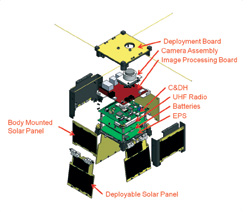 KySat-2 diagram courtesy of the University of Kentucky’s KySat-2 team.

As part of the functional testing, the software team worked with the satellite startup procedure, building in methodology whereby the spacecraft cannot transmit until the solar panels have been extended. This prevents accidental transmission attempts that might damage the radio. The team members then populated the beacons with the electrical power system telemetry to enable ground stations to evaluate the spacecraft’s health in real time.

This technology demo CubeSat expands the university’s STEM program and also features a new component that determines the three-axis rotation of the satellite using sequences of digital pictures. Called a Stellar Gyroscope, the instrument integrates a “star camera” that collects to measure attitude angles. This device could eliminate the need for the convential gyroscope and offers high slew and update rates.

Further information is available at: http://ssl.engineering.uky.edu/missions/