For three student teams, the dream of building and working on a real space mission is coming true—at 01:50 CEST (23:50 GMT) on April 26th, a trio of student-built CubeSats were released into space as part of European Space Agency’s (ESA) Education Office ‘Fly Your Satellite!’ program. 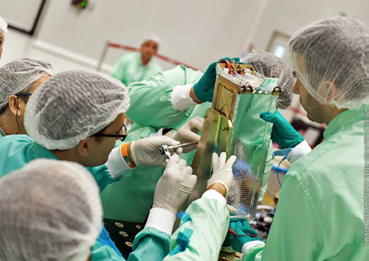 Fit checks for the CubeSats’ P-POD on ASAP-S.

Transmissions from the Fregat upper stage revealed that the door on the CubeSat deployer opened normally, around 2 hours and 48 minutes after launch, and the CubeSats traveled to their final orbits, and then the university teams waited for them to establish contact.

During the first hour of flight, the CubeSats worked autonomously to stabilize their motion, perform internal health checks and deployed their antennae to establish communication with Earth.

For the teams who programmed the satellites to accomplish these tasks, this was the most difficult time. There is nothing the team can do except trust their satellites, similar to the feeling parents have waiting at the gate to see how their children managed on their first day of school.

“During testing, if something went wrong we could fix it. Now, like in all space missions, we have to count on the work done so far on the ground,” said Piero Galeone, Head of Tertiary Education at ESA and Fly Your Satellite! program manager.

According to Galeone, the painstaking preparations to make sure that something doesn't go wrong has been a key lesson for the students. During the test phase, they were taught not to hurry. 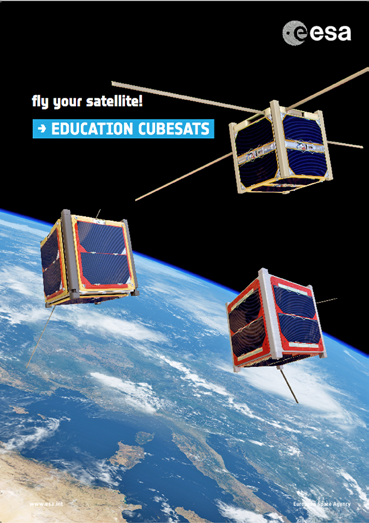 The CubeSats, which each measure 10x10x11 cm, hitched a ride on Soyuz flight VS14, piggybacking on the launch of the rocket’s other passengers: Europe’s Sentinel-1B, the primary payload, and CNES’s Microscope satellite.

From the moment the CubeSats began transmitting, they were visible to radio amateurs from all over the world.

The CubeSats are positioned in an elliptical Low Earth Orbit (LEO), swinging from about 665 km to 453 km and back again. The final orbital parameters were confirmed over the next few hours.

Their orbit is very inclined over the Equator, taking them over the poles of the planet. This orbit placed them, periodically, in good view of the ground stations. From this orbit, they will re-enter Earth’s atmosphere in approximately eight years—they will not become space junk once their missions are over.

The student teams responsible for these missions then started checking out their spacecraft and prepared to conduct the designated missions. The e-st@r team first worked on consolidating a radio communication link with their satellite.

ESA’s Education Office challenged the amateur radio community to listen for the tiny satellites. All three Fly Your Satellite! CubeSat teams watched closely to receive the first signal acquisitions from their smallsats. Many did not sleep at all that night. Once the signals are acquired, the smallsat missions can begin.

The CubeSat separation. Image is courtesy of Arianespace + ESA.

OUFTI-1, University of Liege, Belgium, is testing a new communications subsystem; e-st@r-II, Polytechnic of Turin, Italy, demonstrated an attitude determination system that uses measurements of the Earth’s magnetic field; and AAUSAT4, University of Aalborg, Denmark, operated an Automated Identification System (AIS) receiver to identify and track the position of ships transiting away from coastal areas.

In addition to these valuable contributions, the students who participated in the Fly Your Satellite! program now have the real world experience of working on a space mission. Having started to operate their mission in orbit, the students have entered the final phase of an exciting educational journey that started more than three years ago.

This is one of the key objectives of ESA’s Education Office: to equip the next generation of scientists and engineers with the skills required to keep Europe at the forefront of space exploration, utilisation, and research

For the students taking part in the ESA Education Office’s Fly Your Satellite! program, the launch of their CubeSats marked the beginning of their missions. Now that the miniature satellites are in orbit, the teams are learning what it really means to ‘Fly Your Satellite!’.

“Having your own project launched into space is so exciting! We have been working in the lab for a long time waiting for this moment. When we were notified that the first signal was received, I realized a dream was coming true!” said a student from the e-st@r-II team.

AAUSAT4 is designed to test the Automatic Identification System (AIS) for tracking ships on navigation routes, mainly around Denmark and Greenland. The team has already downloaded a lot of AIS data and is in the process of fine tuning the system.

The received data shows that the CubeSat is in the best of health, all subsystems are working correctly and the conditions on the spacecraft are within the expected range. No anomalies have occurred and the on-board computer has functioned continuously without the need for any re-boots. 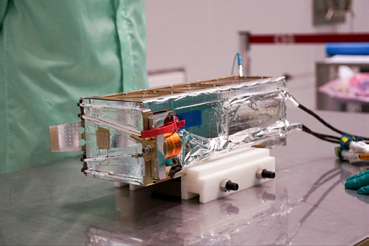 “We are now getting down to the real work and learning what running a space mission is all about. It’s a great feeling!,” said a student from AAUSAT4.

e-st@r-II is designed to demonstrate an attitude control system that uses measurements of the Earth’s magnetic field. However, this smallsat is proving to be a little shy. Although a signal was picked up on the correct frequency at the correct time soon after launch, that signal was too weak to be decoded.

A concerted effort by radio amateurs around the world yielded a decoded signal on May 2nd; however, it is now clear that the CubeSat is not transmitting as strongly as it should—the student team found that their Fly Your Satellite! experience took a different turn.

Instead of operating their mission, they have now been given a masterclass in how engineers diagnose problems on spacecraft. This is a painstaking, step-wise process that cannot be hurried and involves excluding as many possible causes for the problem as possible to be able to focus on the root cause of the weak signal. To listen even harder to the spacecraft, the team also received help from the 25 meter radio telescope in Dwingeloo, The Netherlands.

“The days after orbit injection have been crazy!” said a student working on the mission, “We had a team meeting with Professor Corpino who told us: ‘Ok guys, e-st@r-II needs your help. This is a challenge that you cannot skip!’ We started then to work hard on two fronts: receiving and decoding telemetry data, and running a fault tree analysis to understand what was going wrong. I have been personally involved in the development of software to decode the telemetry packets despite the very weak transmission signal, and the nice thing is that it works!”

Work continues but one element is certain: e-st@r-II cannot be in better hands. Even if the communications cannot be brought up to projected strength, the team is obtaining important information regarding the issue, and that will serve as invaluable lessons learned for the students to apply to their future projects. 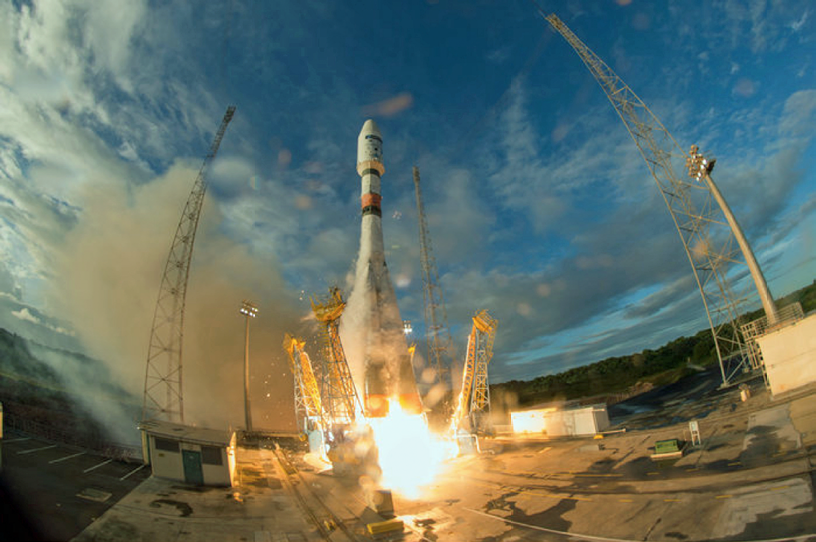 Sentinel-1B lifted off on a Soyuz rocket, flight VS14, from Europe’s Spaceport in French Guiana on April 25th. With the Sentinel-1 mission designed as a two-satellite constellation, Sentinel-1B will join its identical twin, Sentinel-1A, which was launched two years ago from Kourou. Three CubeSats piggybacked a ride on Soyuz. These small satellites, each measuring just 10×10×11 cm, have been developed by university student teams through ESA’s Fly Your Satellite! effort. The other passenger is the Microscope satellite from France’s CNES space agency. The launch photo is courtesy of ESA–Manuel Pedoussaut, 2016.

The third CubeSat, OUFTI-1, is designed to test a new radio amateur transmission protocol—the first signal was picked up soon after the smallsat was deployed from the launch rocket. During the first 12 days in orbit, OUFTI-1 was heard by radio amateurs all over the world and they forwarded more than 500 reports to the OUFTI-1 mission team, including recordings of the satellite’s transmissions and decoded telemetry data.

However, on May 7th, OUFTI-1 fell silent. Investigations are on-going to determine the root cause of this failure with the hope of then recovering the mission.

Similar to their e-st@r-II colleagues, the OUFTI-1 team are also learning how to investigate the anomalous behaviour of their satellite. Starting on May 10th, they began uploading commands to the spacecraft with the aim of triggering a reset or a reaction—OUFTI-1 continues to remain silent.

The Fly Your Satellite! program is just one endeavour from ESA’s Education Office that is designed to help train the next generation of European space professionals.

“Having the Cubesat launched into orbit has been emotional. Seeing the happy faces of my students in that moment has been the most valuable reward for me. I followed their work in the past months and I know how much effort, time, and energy they put into it. Apart from the technical success of the mission, from my point of view the most important result of the project is that all the students had a fantastic learning experience which will be part of their professional background forever,” said the e-st@r-II academic advisor.

Editor's note: This article is courtesy of the European Space Agency's Space For Educators infosite.