The European Space Agency’s Gaia spacecraft has launched with a billion pixel camera aboard as well as the capability of 3D mapping and will also test Einstein’s Theory as to the influence of dark matter. 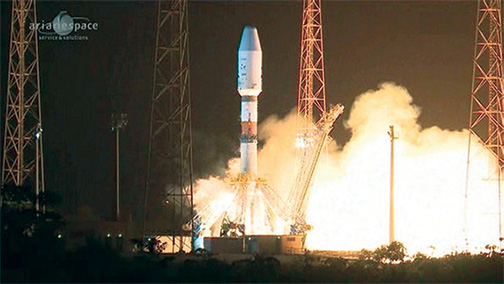 The launch of Gaia. Photo courtesy of Arianespace and ESA.

Gaia will also be on the hunt for exoplanets as will also measure the bending of light rays, due to gravitational effects.

The scientific satellite Gaia, designed and built by Astrium has been successfully launched from Kourou, French Guiana aboard a Soyuz.

Lift off occurred at 6:12:19 a.m., local time, on December 19th, 2013, aboard a Soyuz launch vehicle under the control of Arianespace. This was Flight VS06 and was Arianespace’ sixth mission using the Russian-built vehicle at French Guiana, known as the European Spaceport.

The workhorse launcher performed a powered phase of its three lower stages, and two burns of the autonomous Fregat upper stage to deploy Gaia, which had an estimated liftoff mass of 2,034kg and was released 41 minutes and 59 seconds after lift off.

A second firing of the Fregat 11 minutes later took Gaia into its transfer orbit, followed by separation from the upper stage 42 minutes after liftoff.

Ground telemetry and attitude control were established by controllers at ESA’s operations center in Darmstadt, Germany, and the spacecraft began activating its systems.

The sunshield, which keeps Gaia at its working temperature and carries solar cells to power the satellite, was deployed in a 10-minute automatic sequence, completed around 88 minutes after launch.

Europe’s most advanced space telescope Gaia, built for the European Space Agency (ESA), will produce a highly accurate 3D map of our galaxy, the Milky Way, and discover and map objects far beyond its boundaries so as to improve our understanding of its origins and evolution.

The Gaia mission is also expected to discover hundreds of thousands of unknown celestial objects, including extra-solar planets and failed stars, known as brown dwarfs. And within our solar system, Gaia will be able to identify tens of thousands of asteroids. 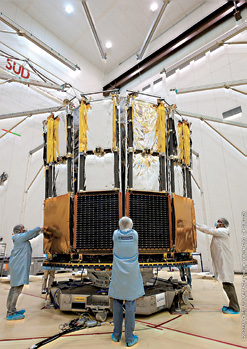 Engineers from SENER and Astrium stow Gaia’s Deployable Sunshield Assembly (DSA) against the spacecraft, in the S1B cleanroom at the Centre Spatial Guyanais in Kourou, French Guiana. This photo is courtesy of ESA-CNES-Arianespace Optique Vidéo du CSG—JM Guillon

Gaia draws on the best in space technology and will carry ultra-modern instruments, including the most sensitive telescope ever made.

This cutting-edge equipment draws on unique expertise developed by Astrium in the field of silicon carbide (SiC) telescopes, such as that used for the space telescope on ESA’s Herschel mission, as well as for all the instruments made by Astrium for Earth observation missions.

Through their space programs, Astrium and its partner Boostec have created a successful new economic sector.

The SiC produced in the French Midi-Pyrénées region enables Astrium and its partners to produce exceptional optical payloads for scientific missions and Earth Observation.

“Gaia is an unparalleled space system: the precision of its instruments and its technical conception once again prove Astrium‘s unique expertise in optical payloads,” said Eric Béranger, CEO of Astrium Satellites. “Mastering these exceptional technologies enables us to maintain Astrium’s rank as the world leader in the export of Earth observation satellites.”

Gaia will also use a ‘photographic’ sensor of unprecedented accuracy. The precision of the measurements taken by Gaia’s optical instruments will be extremely high.

For instance, Gaia would be capable of picking out a strand of hair from a distance of 700 kilometres—the equivalent of the altitude of Earth observation satellites—by using its huge focal plane made up of 106 CCD detectors gathering 1 billion pixels.

For its attitude control, the spacecraft will use a cold gas propulsion system with micro-thrusters, enabling it to remain perfectly stable and point with the required extreme accuracy. 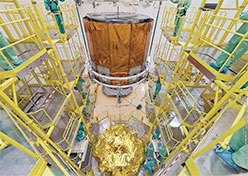 Gaia being lowered onto the Fregat stage. Photo courtesy of ESA.

Gaia will be located at one of the five Lagrangian points in the Sun-Earth system, at the L2 point.

The Lagrangian points in our solar system are points of gravitational balance where a body such as a spacecraft orbits around the Sun at the same rate as Earth, thereby remaining in a fixed position relative to the Earth-Sun line.

The objectives of this new ESA astronomy mission are ambitious: Chart a 3D map of about a billion objects in our galaxy with a precision of 0.001 percent in order to better understand the mechanisms of galaxy formation.

Gaia should also enable scientists to have a more precise insight in the inner workings of the stars as well as to better assess the influence of dark matter.

Accuracy being one of its main features, Gaia will also be on the hunt for exoplanets as well as measuring the bending of light rays due to gravitational effects.

With 40 million observations per day, the cumulative data flow after five years of operation, even after having been compressed by software, will fill the equivalent of more than 200.000 DVD. 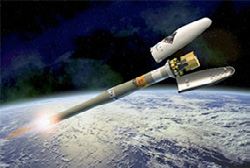 Artistic impression of the Soyuz launcher carrying Gaia into orbit, showing the jettison of the fairing. Image credit: ESA—D. Ducros

It is precisely to develop the management software of the Gaia Payload Data Handling Unit that SPACEBEL was selected and joined the industrial consortium under the leadership of Astrium Ltd in 2007.

The Payload Data Handling Unit is a mass memory device storing the scientific data from seven video units before transferring them to the ground stations.

Gaia is expected to find as many as 10,000 planets beyond our Solar System and hundreds of thousands of asteroids and comets within it. The mission will also reveal tens of thousands of failed stars and supernovas, and will even test Einstein’s famous theory of General Relativity.

Once Gaia starts routine operations, around Easter 2014, astronomers will have the challenge of dealing with a flood of data.

Even after being compressed by software, the data produced by the five-year mission will fill over 30,000 CD ROMs.

This data will be transmitted ‘raw’ and will need processing on Earth to turn it into a calibrated set of measurements that can be freely used by the astronomical community. 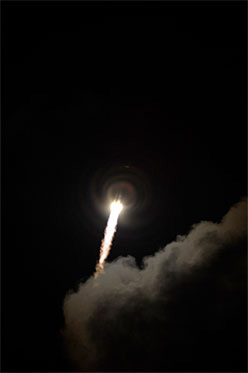 Soyuz with Gaia aboard, reaching for the heavens. Photo is courtesy of ESA.

The cutting edge computer technology developed at the Cambridge Data Processing Center will be key to this process.

The first Gaia science will be discoveries of new sources—supernovae, extreme variable stars and blazars—which will be discovered at the Cambridge processing center, and immediately made available for study by both professionals and the interested public.

Gaia will discover many new sources which are bright enough for amateurs, and schools with access to public robotic telescopes, to become the first to confirm and obtain more information.

Schools and amateurs will be able to load their data onto the Gaia web site (http://gaia.ac.uk/) where it will be used in scientific analyses, and fully credited.

“A school class can be the first to `adopt a supernova’, observe it with robotic telescopes, such as the Faulkes, and provide critically important science information which we need to understand the new sources. That class will be doing original science, and will be credited for their research contributions” said Dr. Heather Campbell, a scientist at Cambridge who is part of the Gaia science alerts analysis team.

“By participating in the Gaia Alerts program, and remotely controlling the Faulkes Telescopes to observe exciting targets discovered just hours beforehand, UK schools will be making real contributions to the research side of this project,” added Professor Paul Roche, Director of the FT project at the University of South Wales. 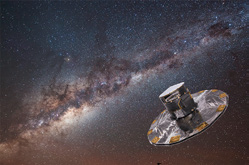 The United Kingdom (UK) had two major roles in the Gaia mission: Building the spacecraft, and delivering the science.

UK industry and science institutes won some 80 million euros of industrial contracts to build Gaia, with leadership roles in building the heart of Gaia, the array of 106 CCDs, the control avionics and the critical micro-propulsion system, as well as playing a critical role in the development of the Gaia spectrometer.

Astrium at Stevenage was responsible for the spacecraft’s super precision guidance and control system as well as the powerful on-board computers needed to process the torrent of data it will produce.

The ‘eye’ of Gaia’s camera has the most sensitive set of light detectors ever assembled for a space mission. It is also the largest focal plane array ever to be flown in space and contains a mosaic of 106 large area, high performance Charged Coupled Device (CCD) CCD91-72 image sensors, which are custom designed, manufactured and tested by UK company e2v.

Without these image sensors the Gaia mission would not be possible. These detectors were calibrated with the Gaia electronics at Mullard Space Science Laboratory.

SciSys UK Ltd is responsible for the spacecraft’s operational simulator.

Gaia data will be processed and analyzed ready for release to the scientific community and public at six data centers, including one in the UK, operating software developed and tested by a consortium of 400 people across Europe, including some 50 people at 6 Institutes in the UK (Cambridge, UCL-MSSL, Leicester, Edinburgh, The Open University, STFC RAL Space and Bristol) 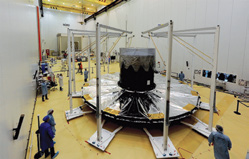 University College London’s Mullard Space Science Laboratory (MSSL) has a major role in spectroscopic science, and in conjunction with The Open University, is involved in software development including architecture, integration and validation, pre-processing development, spectra extraction and calibration.

The UK hosts the Cambridge data processing center, where the Gaia imaging data are processed. These data provide brightness, color, and position information, which enable the core Gaia science, determining distances motions and the intrinsic properties of each star. Gaia also has a spectrograph, to measure the radial velocities of 300 million stars, delivering their complete 3-D positions and 3-D velocities. The spectra will be processed at the French data center, using software in part developed in the UK.

With extreme precision and extreme stability as design drivers, Gaia is a concentrate of technological firsts.

Gaia’s astounding acuity—the mission aims to pick out celestial objects one million times fainter than the human eye can see—is achieved by more than 100 light-detecting sensors, like minuscule digital cameras, mosaicked together to form the largest ever space-bound focal-plane array (nearly a billion pixels packed onto a surface of 0.38m2).

Channeling the light onto the focal-plane array are two telescopes with primary mirrors set at an angle of 106.5° to each other for a wide-field view. 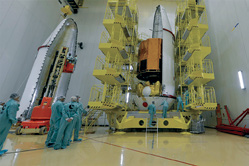 Gaia being positioned inside the Soyuz fairing in preparation for the launch. The spacecraft (orange) was attached to the vehicle adapter (yellow) before being installed in the fairing. This work was being completed inside the S3 building at the Centre Spatial Guyanais in Kourou, French Guiana. Photo courtesy of ESA - M. Pédoussault.

Despite the spacecraft’s modest dimensions (the payload module is 3.5m in diameter), an ingenious method of bouncing the collected light through a series of 10 mirrors of different shapes and sizes means that the telescopes’ effective focal length is extended to 35m. Thus Gaia can ‘see’ objects 400,000 times fainter than those visible to the naked eye.

The data from Gaia’s three instruments (taking astrometric, photometric and spectroscopic measurements) should provide a pinpoint location for each star mapped with an error margin of only six microarcseconds, equivalent a penny on the surface of the moon, as viewed from Earth.

Rock-steady stability is crucial for making observations of such minute detail, and this dictated Astrium’s choice of material – silicon carbide (SiC), a ceramic twice as rigid as steel, ultra lightweight, and remarkably resistant to expansion/contraction under temperature change.

SiC is the only material which can guarantee the stability, durability and lightness of the probe, and Gaia will be the largest ceramic space instrument ever flown.

There are virtually no moving components on Gaia, to avoid vibration. (Even the Earth-communicating antenna points electronically, not mechanically.) As this ruled out ‘standard’ chemical thrusters, an entirely new type of nitrogen-based thruster for fine attitude pointing which exerts a force as small as a micronewton was specially developed for the mission.

You would need a thousand such tiny thrusters to support a sheet of paper. 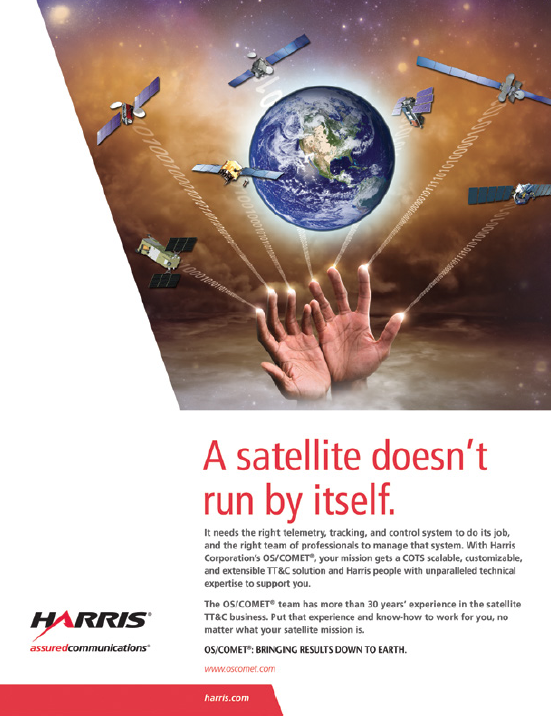