The Malaysian government has made reliable telecommunications a top priority for every community within the nation’s 329,000 square miles. 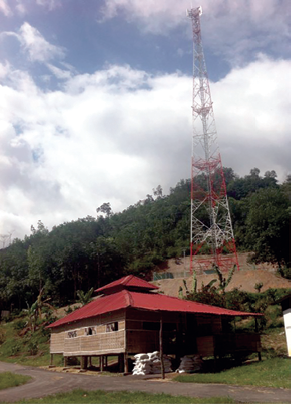 Indeed, the country’s Universal Service Provision (USP) program was specifically developed to provide voice and Internet connectivity for people living in its two major land masses, Peninsular Malaysia and East Malaysia, separated by the South China Sea. But reaching the approximately 8 million population living in rural and remote areas presented a major challenge—as the cost of terrestrial networks is prohibitive, in contrast with the 20 million in metropolitan areas who are well-served by cellular 2G and 3G networks.

Enter Hughes and Maju Nusa Sdn Bhd, a premier Malaysian satellite service provider. Together, these companies have successfully solved the problem by implementing a novel and cost-effective Multiple Operator Radio Access Network (MORAN) solution. So named because the same infrastructure enables multiple operators to deliver services, MORAN is composed of a Hughes HX system with terminals co-located in each 2G/3G cell site, connecting traffic via satellite between the Base Transceiver Station (BTS) and the core cellular network. Unlike terrestrial solutions, for which costs are distance sensitive, employing the HX Satellite Backhaul system means uniform Capex and Opex costs, no matter where the cells are located.

The Malaysian government owns the network and contracts with Maju Nusa to manage all on a long-term basis. Maju Nusa resells wholesale services to the cellular operators, which include managing the radio, transmission, BSC, and RNC portions end-to-end. Cellular operators, in turn, resell cellular services to end users. The Hughes HX system has several key features that enable it to meet and exceed Maju Nusa’s network requirements:

• Low latency and jitter, making it ideal for cellular backhaul
• An optimized encapsulation scheme on the outroute and advanced Low-Density Parity Check (LDPC) coding on the inroute, for maximum bandwidth efficiency
• Integrated traffic management techniques, such as dynamic channel assignment and as-needed sharing of capacity between multiple sites, yielding best-in-class throughput and lowest operational cost on satellite links
• Interoperability with a wide range of cellular provider networks and technologies 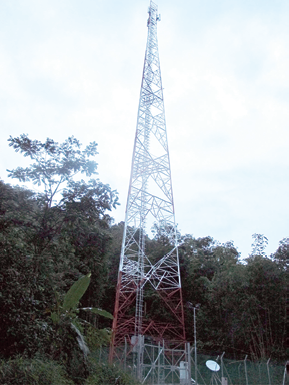 In addition, the HX system is easily installed by a single person and can be solar powered to increase versatility in areas with limited infrastructure.

Maju Nusa Sdn Bhd
“We have been using the Hughes HX system for last three years for various services that include broadband Internet, maritime, and mobility services. It was last year when we were awarded this GSM deployment project, and we can proudly say that the HX system allowed us to connect remote parts of the country and offer cost-effective backhaul for cellular mobile services without having to worry about jitter and latency on the satellite network,” said Faris Najhan Hashim, chairman of Maju Nusa.

Ramesh Ramaswamy, vice president of sales and marketing, international, at Hughes, said, “For people who live in these rural areas, this will be the first time they have cellular service in their communities. Hughes is deeply committed to delivering solutions that meet the challenge of providing cost-effective communications in rural and remote areas worldwide.”

With this important initiative, people across Malaysia will be connected to the global Internet marketplace and have the opportunity to help expand the country’s economy, now the world’s twenty-ninth largest and third largest in Southeast Asia, with steadily growing manufacturing, agriculture, tourism, and financial services industries—no matter where they choose to live or work.

About the author
Vince Onuigbo is a Senior Marketing Director at Hughes, where he leads the technical marketing and business development for satellite backhaul of radio access networks globally. Among Vince’s responsibilities are, liaising with engineering to deliver optimized satellite backhaul solutions for various cellular standards 2, 3 and 4G/LTE and  scenarios—rural, urban and residential/enterprise deployments. In addition he leads the analysis and validation of prospective customers’ backhaul business cases to ensure the most cost-effective systems design, and building of third-party partnerships that facilitate the best overall project delivery experience for operators. In early 2000, Vince played a leading role in the market development of Western Europe, Africa, and Middle East for Hughes Terrestrial Point-to-Multipoint microwave solution, used primarily for cellular backhaul.

Prior to joining Hughes in 1996, Vince held various technical positions at Motorola Cellular Infrastructure Group, including GSM /CDMA systems engineering and consultant to mobile operators for the planning of network roll-out.  Vince is a published expert in the field of wireless access. He is a member of the IEEE and holds a BSc with honors in Electrical Engineering from Ahmadu Bello University Zaria, Nigeria and an MBA from Keller Graduate School of Management of DeVry University.