At the close of March this year, the Satcom Innovation Group (SIG) headed to Airbus Defence and Space in Portsmouth, UK, for two days of presentations and discussions at our SIG Workshop.

This was a great location for our first workshop, especially as the name change from Satellite Interference Reduction Group to Satcoms Innovation Group has been made and this workshop promised to feature varied discussions.

Interference remained prominent, something that I made extremely clear at the outset. No other group is tackling interference and it remains a critical part of SIG’s mission, along with other crucial issues being faced by our members. We started by discussing how the satellite environment is changing and the impact that SIG will have on the industry.

Changing Satellite Environment
The workshop kicked off with an excellent reminder from Andrew Bond of ETL Systems that teleport operators need to ensure RF performance and reliability that is second to none. He made the point that in certain countries you cannot get a broadcasting license without 98+ percent reliability. Achieving that means ensuring the correct products are in place throughout the RF chain and it also means ensuring redundancy.

ETL uses live hot swap to enable customers to grow the number of antennas that can be handled in a teleport as well as ensure they are able to change feed between systems. Andrew also reminded us that the biggest innovation currently making headway will be focusing on HTS, LEO, and MEO, though he did highlight that he is still not certain how and when LEO will work, as it is yet to be proven viable.

What is clear that site diversity, redundancy and resiliency are ,and will continue to be, key for all of those applications. He concluded by saying that teleport operators need a calm MCR so they can sleep at night knowing all is under control.

Bob Potter from Kratos spoke next, taking us into a number of items we need to think about right now in the satellite industry: 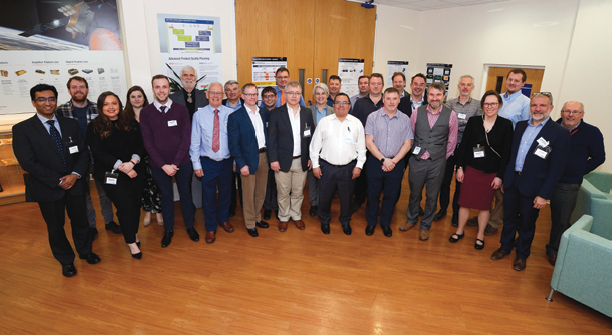 The SIG Workshop at Airbus participants.

With OneWeb due to launch 720+ satellites, Telesat launching 117 and SpaceX a whopping 4,425 satellites, it is clear LEO space is about to get extremely congested, raising a number of challenges.

He highlighted that, with these new constellations, we will need new access techniques and this will directly affect what happens in the ground segment. Kratos has been doing a lot of work around virtualizing the ground stations.

If you turn RF signals into a digital format, you can send data to the cloud and apply software modems and ultimately handle more data — and that means you can do more. However, it is still less expensive to buy physical hardware and satellite operators will continue to do just that; however, as the cloud becomes more economical, there will likely be a big move toward virtualized ground stations.

Roger Boddy of Global Teleports, addressing the use of space, presented a summary of the evolution of satellite communications. He highlighted the protection historically afforded by Radio Regulations to satellites in Geostationary Orbit (GSO) from interference by those in Non-Geostationary Orbit (NGSO).

He questioned whether the number of satellites scheduled for launch into NGSO during the next five years indicated a need for change in radio regulations to afford equal protection to NGSO as well as GSO spacecraft. He pointed out the increased risk of eclipse of GSO satellites by those in NGSO and that this has the potential to create another source of interference caused by diffraction. 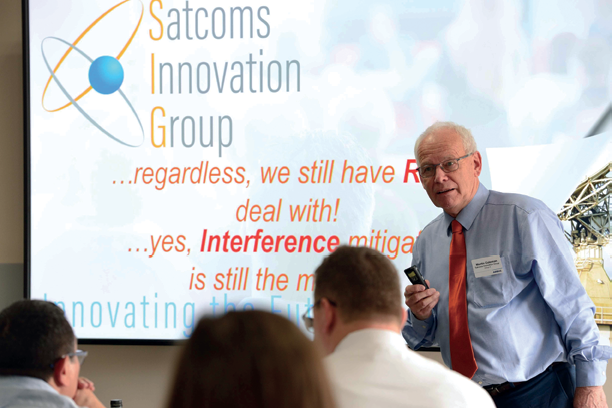 SIG Executive Director Martin Colman engaging in a presentation discussion during the workshop.

SES’ Lance Hayward talked about the changing satellite environment and focused on the customer landscape. Broadcast has always been a big revenue driver for satellite operators, but as Lance highlighted, the move toward Over-The-Top (OTT) video is disrupting the satellite ecosystem.

However, consumers don’t particularly care how they obtain content — just that they get it. Satellite has the potential to handle this new type of video consumption as well as emerging services such as Internet of Things (IoT) and satellite operators need to transform from being capacity providers to service providers.

Francis Kinsella of Airbus shed some light on just how Airbus and OneWeb will scale production so that the company can design, manufacture and test 900 satellites. This requires the complete reinvention of the way in which satellites are created, similar to when Ford first mass produced cars with the Model-T. Unlike cars, however, it simply is not, nor will be, a simple or feasible task to recall satellites if a problem occurred with the spacecraft — careful planning and management must be applied to mitigate such risks as much as is possible.

Kinsella encouraged the industry to become more aware and proactive with Space Situational Awareness (SSA). This should take the form of Spatio spectral models, big data sets and Artificial Intelligence (AI). SIG member Safran is already working on this issue, as was highlighted by Thierry Balanche.

Intelligent Use of Data
The discussion then turned to data and how we can gather and use data. Valentin Eder of Space Analyses talked about how they are applying business intelligence to technical data from VSAT systems to optimize the use of assets in SATCOM. This process can be used to inform a satellite operator how well stations have been installed, any signal problems in the complete system chain or the presence of weather-related incidents.

Alessandro Cacioni of Inmarsat talked about the Space Data Association and how that organization is providing operational data with good success. However, with a congested space, the data needs to become even more useful. He likened it to driving along the M25 highway wearing a blindfold. He pointed out that on the M25, if there is an accident, the traffic stops and the road is closed. In space, that doesn’t occur — we just keep driving blindfolded. If there is a collision at GEO, the whole belt will be affected within a matter of 24 hours.

A discussion of data cannot ignore AI and there was some in-depth discussion around this technology, how it should be defined and what it could bring to the satellite industry, as well as the value versus cost challenge. 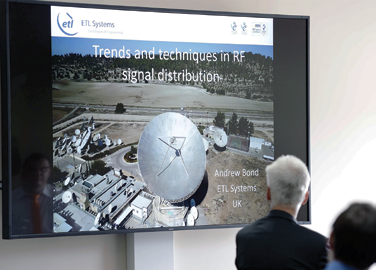 The ETL Systems presentation during the workshop.

Andreas Voigt, SIG Director, talked about the need to understand maths in order to leverage AI effectively. He also said that we need large amounts of high-quality data to make decisions but it will always be a digital helper, with the NOC operative having the final word on any decisions that arise from that data. This view was echoed by Prashant Pillai of the University of Wolverhampton who commented that AI will not replace people in the near future.

Andreas commented that subject-matter experts who understand AI and can process the data are lacking in number. Miguel Angel Vazquez of the CTTC research center responded to that comment and presented a project which was testing the use of AI on several different SATCOM use cases, including interference detection, and was producing highly encouraging results.

How should the industry move forward? Would satellite operators be comfortable providing data to a third party, such as CTTC, in order to deliver a way to predict patterns before issues arise?

Cybersecurity
Prashant Pillai discussed how AI can help with cybersecurity. As there is really no systems that is secure, he urged us to consider how to build and monitor cyber resilient systems if they are under an attack and how to gracefully recover from such an interruption. He also posed a thought about how to recover from a cyber attack on a satellite as the spacecraft can’t simply be retrieved.

Kinsella pointed to the fact that most modern VSAT terminals have, for the most part, auto point technology so that soldiers without extensive satellite training can use antennas. That does mean the VSAT knows where it is positioned, so if a hacker can get into the system, they will have that location information. This poses a new challenge of keeping VSATs secure.

Type Approvals
A known fact is that many errors occur due to equipment design errors and failure and the antenna is at the top of that list. Therefore, we need type approvals and a commitment from satellite operators to require only type approved antennas and associated equipment to be used on their satellites. SOMAP, which was established by a group of satellite operators, is doing to do just that.

One technology that has the potential to revolutionize the process of type approvals comes from a Danish start-up, QuadSAT. Joakim Espeland, the company’s Co-Founder, explained that currently a ship needs to be taken out of port on a specific trip to test the satellite antenna.

That is time-consuming and costly for the ship operator. That scenario also applies to the aircraft industry to. QuadSAT decided that, instead of moving the ship around the satellite, how about moving the satellite around the ship. Using an autonomous unmanned aircraft with RF payload, the company is able to perform tests on the antenna while the ship continues on its normal route. This technology is also cloud-based and can be controlled from any location.

Joakim did point out several considerations and attendant concerns for using drones, including the regulations that vary from country to country. In some areas, there is a maximum altitude of 120 meters, which creates a challenge for testing high frequency, large antennas.

Regardless, it is obvious and, especially from the discussion in the room, that this technology has some real potential. Joakim ended by saying that QuadSAT has ambitions to become industry compliant and the firm is keen to work with the test entities and satellite operators to verify this new and innovative solution.

Sharing Spectrum
Spectrum sharing is another important topic currently and one that we will address during a session at NAB. This is, naturally, a really challenging topic and one with some differing viewpoints.

BBC World Service’s Cath Westcott explained the impact the loss of C-band satellite spectrum would have on the BBC’s international distribution. She commented that if there are technologies that can enable effective spectrum sharing, that would be really important to facilitate.

Education
We ended the workshop discussing education and how we engage with the satellite engineers of the future. Roger Boddy talked about a group he runs, EMSTA, which runs an annual seminar for young people that is focused on a variety of technical topics.

How do we engage the younger generation and get them inspired about a career in satellite? This may be about going into schools, but maybe also about inviting schools to come to events and hear what is involved from the people who are working in this industry. To get involved in an initiative along these lines, I’d urge you to get in touch with us.

The event ended with a tour of the Airbus facilities where the processes involved in building satellites and related satellite products was seen and captivated the entire audience.
satig.space

Martin Coleman is Executive Director, the Satcoms Innovation Group (SIG), which is dedicated to promoting innovation in the satellite industry. Since taking on the position in 2011, Martin has been active in spearheading several significant initiatives, leading the advance in new tools to resolve all types of VSAT interference using SatGuard and the campaign to introduce Carrier ID across all SCPC/MCPC transmissions and subsequent ongoing activities.

Martin regularly addresses the industry on the challenges faced by the satellite industry and the innovative approaches needed to resolve them.

Martin’s own company, Colem, which is now a part of Crystal, is a services, design and project management consultancy developing Network Management Systems (NMS) and automation control (NMS+) for the satellite and video distribution industry. 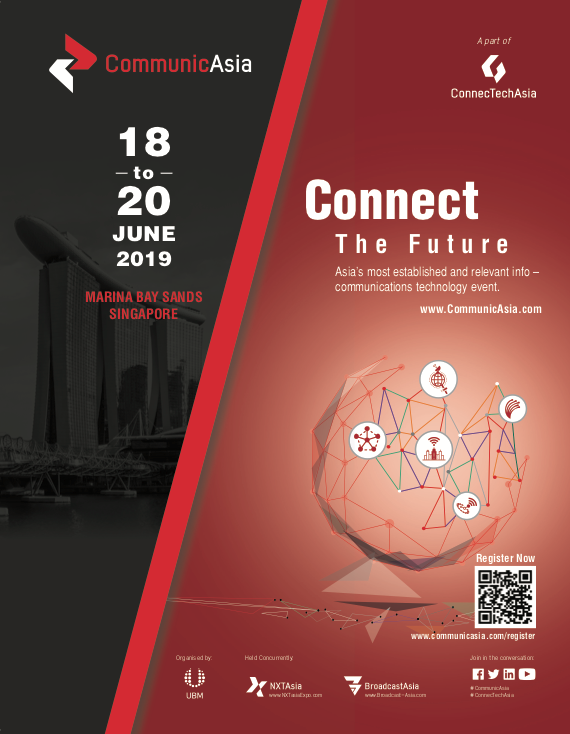