In numbers, 99 active Direct-to-Home (DTH) platforms were broadcasting over 13,800 television channels to more than 114 million subscribers at the end of 2008, generating more than US$65 billion in Subscription Revenues. At blended average revenues of US$47.75 per month, viewers were being treated to High Definition (HD), Digital Video Recording (DVR), Video on Demand (VOD) and Triple Play services like never before.

Every television market, however, has its own unique dynamic that goes beyond box-selling economics, payTV penetration and broadcasting regulation to reflect the role of television in popular culture. North America, Europe and East Asia are strong markets for DTH, whereas those of South and South East Asia, Sub-Saharan Africa, and Latin America are still very much on the growth track. In the mature markets, competition drives innovation, which affects everything from localizing content to bundling services. Content exclusivity, on-demand services, and Internet delivery are all examples of services that have been driven by competition in the mature markets. Younger markets such as South Asia, Middle East, and parts of Central Europe are still to consolidate before they experience growth beyond just subscriber numbers.

Global DTH Market Analysis
North America still dominates the DTH market with nearly 30 percent of subscribers and 49 percent of subscription revenues being generated from the region’s four DTH platforms. The market is predominantly based on services, and growth is coming in the form of Premium products and packages such as DVRs and HD. Television channels are also moving to HD, with new local HD markets being added every quarter.

Central America and the Caribbean are witnessing a much needed change with the entry of Dish Network Mexico. There has been remarkable growth in subscribers for the platform and the market is expanding at the lower end with competitively priced packages. Subscriber, Revenue, and Channel numbers may be in the low single-digit percentages when compared with the rest of the world, and Premium services are yet to emerge, which indicates plenty of growth opportunities.

South America’s DTH market is experiencing a fresh wave of growth driven by convergence of voice, video, and data. The market, earlier dominated by heavyweights such as Sky Brazil and DirecTV Panamericana, is now bubbling with Triple Play services from telcos that have made forays into the payTV market. Healthy subscriber growth will be complemented by Premium services over the long term, even as competition is set to increase.

Western Europe has long been dominated by single, large, near-monopolistic DTH platforms — one for each country. A region that houses 25 percent of the worlds’ DTH subscribers and an equal percentage of subscription revenues is witnessing a new spurt of activity. Markets that could easily be pegged as saturated are growing HD subscribers in double digits.

Central and Eastern Europe, as well as Russia, have seen the emergence of more than two dozen distinct platforms that now dot the DTH landscape in the region. Subscriber growth is steady as viewers switch from analog terrestrial to digital satellite. However, the number of players vying for a share of the market has made competition fierce.

As a region that was, until recently, on the growth track, NSR expects a steady increase in DTH subscriber numbers for the Middle East and North Africa. However, consolidation has set in despite the small number of players in the region, with Showtime and Orbit merging operations. Piracy continues to plague the regions’ payTV markets and subscriber growth is muted as a result 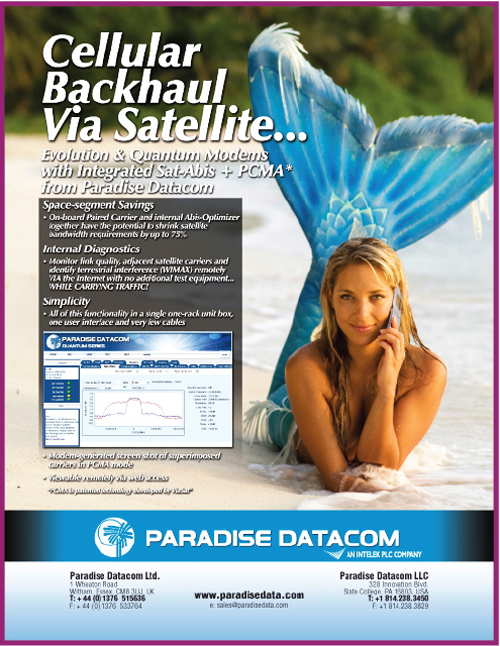 Sub-Saharan Africa, as a region, has been dominated by a single DTH operator in the form of MultiChoice. The emergence of new platforms in countries such as Nigeria and Kenya has met with mixed response. The market is headed towards expansion driven by low cost platforms that are increasing the penetration of satellite television into smaller cities and towns of the African continent.

Direct-to-Home is the “Sunshine” sector in the continually growing Indian economy. Apart from Dialog TV in Sri Lanka, all South Asian DTH platforms are adding subscribers at staggering rates. Even at 10 percent of the world’s DTH subscribers, the market seems premature for Premium services. Competition, however, has overruled that premise, with DVRs and HD making an early appearance.

East Asia is a market dominated by terrestrial and cable television with extremely high penetration rates and a growing broadband footprint. DTH has made a reasonable impact, but growth will remain gradual — driven by Premium services, but held back by competing platforms.

Generating nearly 7 percent of the world’s television channels, South East Asia has been touted as a region poised for growth for DTH platforms and their satellite operators. The market has what it takes to deliver on that promise as penetration increases, but piracy continues to plague all PayTV platforms.

Cushioned Impact
As the rest of the world, and most other industries, recover from the effects of the slowdown in the global economy, PayTV operators in general have reported a relatively cushioned impact on subscriber growth. Research indicates that most people prefer to “stay at home and watch television,” something that is viewed as an inexpensive source of entertainment, rather than go out for movies, dinner or travel in the times of recession. DTH operators have tried to cash in on this phenomenon by slashing package prices and introducing multiple payment options. 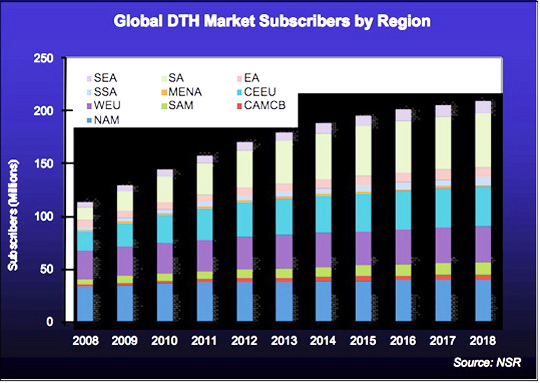 “Mature” Competition
North America, Western Europe, and East Asia are, by and large, the more “mature” of DTH markets. However, the latest marketing messages point towards how cable television has been unable to meet the demand for DVRs. Companies battling for a share of the same television household pie are often found locked in battle. Competition is fierce, to put it mildly, and operators are scrutinized by their churn numbers.

Advertising campaigns are aimed at competitor weaknesses more than one’s own strengths, and in countries where there is little to differentiate in terms of content or service, price becomes the lowest common denominator.
Cooperation and Consolidation
Regions such as Central and Eastern Europe, Russia, and South America are nearing the end of their rampant growth period. The operator climate is characterized by a large number of players, either in the form of DTH operators or divisions of telcos offering DTH as a part of Triple Play. In the case of Central Europe, consolidation seems almost inevitable, as countries such as Poland seem incapable of supporting the ever-increasing number of DTH platforms. South America, on the other hand, is witnessing the cooperation of telcos and payTV providers to combat DTH heavyweights that have hitherto dominated the market. In another part of the world, the merger of Showtime and Orbit underscores the need for scale in the Direct-to-Home marketplace.

“Sunshine” and Subsidies
South Asia is the region with the fastest growing subscriber base complemented quite drastically with the lowest Average Revenues per User (ARPU) in the world. Subscriber acquisition costs are tremendously high, and the industry on the whole is suffering from the burden of heavy subsidies on equipment. As operators bet upon the teeming billions to mimic the success of the cellular business, the industry will eventually have to deal with extended gestation periods before break even is achieved.

Global DTH Forecasts
Basic DTH service subscribers are on their way to being matched by Premium subscribers — a phenomenon that is being seen in almost all countries of the developed world. In addition, market trends indicate that Basic subscriber figures are declining steadily in regions such as North America, Western Europe, and East Asia, even as more subscribers choose DVRs, HD, and HD-DVRs as their entry packages. The higher ARPU figures certainly do not hurt the DTH platforms, but the long term challenge lies in providing the HD content to keep the subscribers coming back for more.

NSR projects the total figure of 114.3 million DTH subscribers will grow to about 209.6 million DTH subscribers, even though Basic DTH subscribers are expected to decline towards the end of the forecast in the period from 2015 to 2018. However, the situation varies drastically according to region as there is still a significant percentage of the global population that does not have the ability to pay the difference and switch to a Premium service.

DVR subscribers, on the other hand, have made their presence felt across all of North America and Western Europe and are extending their reach in countries as far as Australia, Japan, and parts of Central Europe. DVRs have noticeably changed the way television is watched, and the influence of devices such as TiVo cannot be overstated. Many believe that DVRs will also have a significant impact on traditional television advertising, however, little evidence exists to prove that viewers across the board are skipping ads altogether.

NSR expects that, as with most other services, there would be saturation in the global DTH market at about the 210 million subscriber mark, which represents a penetration of a little above 15 percent of TV households during the 2018-2020 time frame. Competitive offerings by cable providers will be partly responsible for this saturation — churn will continue to be an important parameter that all payTV platforms will need to keep in check. 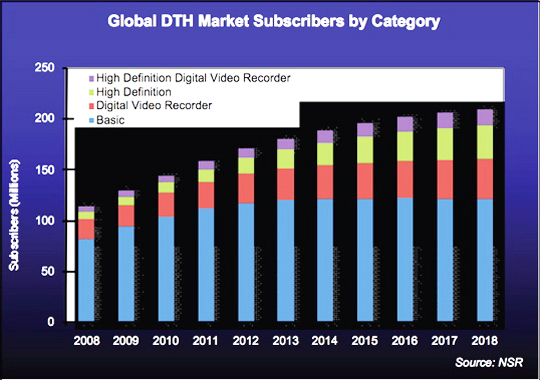 As of the end of 2008, there were 13,875 channels on DTH platforms around the world. Market trends suggest that throughout the forecast period, growth will be a combination of internal and external additions; i.e., in the form of new channels being added to existing platforms, and NSR also expects over a dozen new DTH platforms to enter the market during this time that will add to channel counts drastically.

NSR’s assessment of subscription revenues takes into account the net loss and net gain of subscribers for DTH platforms year-on-year. Subscription revenues alone bring in about US$65 billion annually, and NSR expects this figure to grow at a CAGR of 4.4 percent to a little above US$100 billion by 2018. Revenues from Basic DTH services are expected to contribute smaller percentages going forward as subscribers switch to the higher ARPU Premium services.