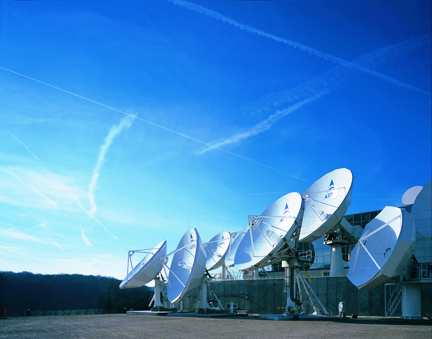 SES teleport in Betzdorf, Luxembourg, photo courtesy of SES. Energy costs are spiraling upwards while “carbon footprints” and “sustainability” have become the rallying cry. In addition, customers are increasingly including power consumption and green initiatives as decision criteria in contracts and equipment purchases. So it’s not surprising to find the satellite industry, and in particular the teleport sector, taking on the “Go Green” challenge.

Teleports spend between three-hundred-thousand and a million dollars every year to power everything from heat and air systems to light bulbs, computers and backup generators. A growing number of teleport operators, however, are finding their age-old nemesis of excessive energy consumption now has a silver lining — plenty of room for savings. Cutting teleport energy usage through green initiatives is a relatively easy way to reduce the energy bill by anywhere from 20 to 40 percent.

The Road To Green

Frost works with a range of organizations to generate sustainable efficiencies and even new revenue streams from energy conservation. “There are several phases to a successful energy management solution, beginning with an audit to uncover quick, easy energy-saving fixes that can have a major impact on the bottom line. It may not be exciting to review system efficiencies, but the savings amounts to serious money.”

Employees are responsible for as much as 40 percent of the energy usage at the office, so educating them can play a significant role in an organization’s energy efficiency plan. “I can’t count the number of offices I’ve visited where employees had heaters at their feet in the middle of summer, complaining the AC was too cold,” explains Frost.

Programmable thermostats are an easy and affordable way to increase comfort and decrease costs.

Lights, fans and office equipment such as computers and printers are generally left on even when not in use. Consider that a copier left on 24/7 costs between US$150 and $200 a year. Soft drink vending machines are energy hogs at $350 a year. Leaving a computer sitting idle costs about 3 cents an hour. Add up all the computers in a teleport and that can quickly turn into significant money.

Furnaces, boilers and air conditioners are also energy guzzlers. New heating and cooling systems feature energy-saving technologies and use eco-friendly refrigerants. Considering that heating and cooling equipment can represent at least half of the energy cost at a teleport, regular maintenance and replacement of old, inefficient systems should be at the top of the priority list. Replacing old generators with efficient, modular units is another step towards energy efficiency and operational flexibility.

Then there’s the obvious, although generally overlooked, items such as ensuring that the weather stripping around doors and windows is tight, or harvesting natural light when possible instead of automatically turning on the office lights.

Green In Action
Hauppauge, NY-based teleport Globecomm Systems, for example, received high marks for having proper lighting in various task areas. Says Frost, “Globecomm’s Hauppauge teleport has all the right lighting throughout their office, engineering and manufacturing spaces. It’s a benchmark facility that has updated its HVAC, control room and teleport infrastructure.”

Globecomm, in fact, has segregated the HVAC for employees from the one for critical components. The HVAC dedicated to keeping employees comfortable has its own monitoring and control to keep the temperature steady. The critical component area includes ambient cooling so when the temperature outside drops below 45° F, the HVAC routes outside air into the system for cooling.

SES, the global telecommunications satellite operator based in Luxembourg, aims to significantly cut its greenhouse gas emissions in 2010. The plans currently under implementation at SES’ headquarters in Betzdorf, Luxembourg, are expected to yield a reduction of approximately 17 percent of the group’s carbon dioxide emissions as measured in 2008.

Under the carbon reduction plan now under implementation, modified heating burners are replacing fuel oil as the main energy source by natural gas, and the cold water chillers currently in use on the Betzdorf campus are being replaced by new and more efficient installations. These initiatives are expected to reduce consumption by more than 500,000 m3 a year, and will also considerably cut Betzdorf’s water consumption. To ensure uninterrupted operations, the new chiller systems are being installed in three stages which are expected to be completed in May 2010.

Since early January 2010, the Betzdorf campus uses electricity sourced from renewable energy — hydropower in this case, which can be considered CO2-free when compared to the electricity produced from the standard primary energy mix of fossil fuels and nuclear power. In addition to reducing carbon emissions, the new generation chillers use significantly less ozone-destroying refrigerants, which further minimizes their environmental impact. 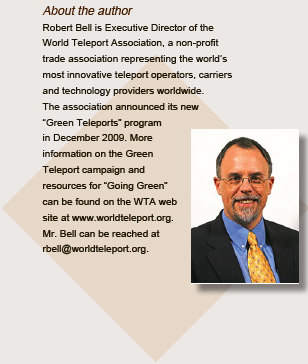 In the spring of 2006, Essel Shyam established a green initiative that includes use of solar heating and establishment of a comprehensive plan for use of alternative energy within five years; switching to high-efficiency illumination devices that will reduce energy consumption by up to 15 percent in three years; maintaining the air-conditioning within the facilities at a temperature 0.5 degrees higher, resulting in 18-20 percent savings over three years; and remodeling the existing facility for energy efficiencies and low carbon emissions as well as using recycled materials in future infrastructure where possible.

Essel Shyam took on the green initiative with innovative techniques designed to maximize the surrounding environment as well as the seasons. While the company’s efforts may not be the latest in high-tech, they’ve realized a reduction of energy consumption of 8.5 percent in the last year. The company is yet another example of what can be accomplished when management sets green as a corporate goal.