In August 2014, Lenovo, the Chinese electronics giant, announced details of its Vibe Z2 Pro smartphone for a September release. Among its many features, the new flagship offers a 16-megapixel (MP) rear camera and 4K video recording. 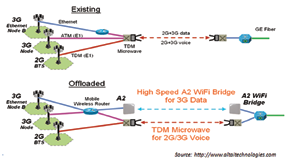 Why should the satellite industry pay attention to this announcement? Basically because 4K in a mobile environment is the shape of things to come. While the satellite backhaul industry is still largely stuck in 2G or, at best, 2.5G mode supporting voice and SMS services in rural and underserved markets, the rest of the world, or users in urban areas, are moving to LTE and are looking at supporting applications that include 4K or UltraHD video. iPSTAR in Asia is somewhat of an exception where its SoftBank contract is supporting 3G services for relatively wealthy users in Japan.

Lenovo’s latest is not the first to join the ranks of an elite category of smartphones with this capability. Sony’s Xperia Z2, Samsung Galaxy SS, Galaxy Note 3 and LG G3 are all capable of recording 4K videos. In fact, Sony’s Xperia Z2 edges the Lenovo Z2 Vibe Pro due to its 20.7MP camera. At the writing of this article, Apple’s much-awaited release of its iPhone6 is rumored to launch 4K as well with a 13MP camera.

It is one thing to tap into the satellite industry’s core backhaul market, which again, is the underserved population of the globe.  Indeed, programs like O3b, the other 3 billion, aims specifically at doing just that—serving the other 3 billion—which has led to a healthy backlog.  The business case of lowering bandwidth costs appears to be sound and other players such as  Intelsat with EpicNG will target this proposition as well. 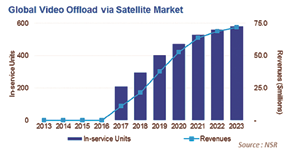 It is quite another matter, however, to tap into an emerging and nascent market, which could provide the industry with an unrealized, or yet unquantifiable, revenue stream.  At a minimum, 4K recording on the latest flagship smartphones as well as upcoming iterations will lead to 4K content contribution and distribution to single users, multiple users and uploading to social media sites that will need to manage their own 4K video requirements as well.

Figure 1 provides the topology of a video offload network using a Wi-Fi bridge based on an all-terrestrial solution. The satellite industry can integrate into the network architecture by providing its own satellite-based Wi-Fi bridge offering.

In its latest market study, Wireless Backhaul, Trunking and Video Offload via Satellite, 8th Edition (http://www.nsr.com/research-reports/satellite-communications/wireless-backhaul-trunking-and-video-offload-via-satellite-8th-edition/), NSR conservatively forecasted the Video Offload via satellite market to account for less than 600 in-service units around the globe, and approximately $75 million in annual revenue by 2023.

However, the potential is much more—NSR sees video offload as a market “wild card,” where in-service units and revenue streams can be exponentially much higher if the industry manages to figure out how to serve urban and suburban markets where the 4K or UltraHD mobile video proposition is about to explode.

The satellite wireless backhaul industry has been relegated to rural and underserved areas while other services, such as DTH, Video Distribution and SDARS, have successfully penetrated the highly lucrative urban markets.

In NSR’s view, video offload in urban areas that is currently being implemented in Wi-Fi networks can become another service where satellites can compete effectively, due to broadcast economics that have worked well in DTH, Video Distribution and DARS. 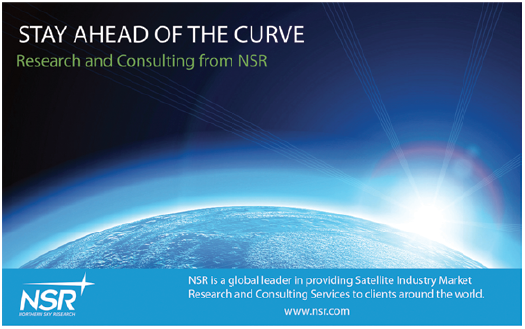 Coming up with a product and service that competes with and/or complements terrestrial wireless and fiber is the key to unlocking the potentially huge revenue flows. With so much capacity expected to be launched in HTS and perhaps the possibility of an impending price war taking place, broadcast economics on HTS platforms may just be the solution that enables the 4K offload wild card.

The NSR infosite is located at http://www.nsr.com/

About the author
Mr. Del Rosario is a senior member of the consulting team where he focuses his research on quantitative modeling, data verification, and market forecasting for the commercial and government satellite communications sectors. He conducts ongoing research with specialization in policy analysis, economic indicators, regulatory initiatives and end user demand trends.

In addition to authoring numerous syndicated reports in his areas of focus, Mr. Del Rosario has been involved in a wide range of strategic consulting projects. He has advised clients on market trends, implications, and strategies on such diverse topics as high throughput satellites (HTS), hosted payloads, wireless backhaul, SCADA/M2M/LDR and multi-mission satellite programs.

Jose also worked as a congressional aide for the Malaysian Embassy and as a telecommunications legal researcher for Irwin & Lesse in Washington, D.C. Mr. Del Rosario holds a Master of Arts degree in Applied Economics from The American University, and a Bachelor of Science degree in Political Science/International Relations from the University of Santa Clara.