Funding Facilitation
The European Commission has signed an agreement confirming the transfer of funds to ESA... 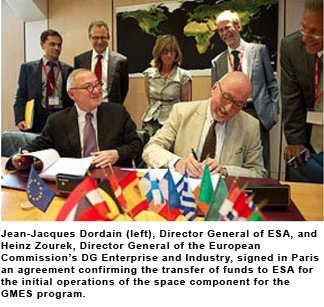 This funding is for the initial operations of the space component for the Global Monitoring for Environment and Security program. The agreement, which secures 104 million euros, was signed at ESA Headquarters in Paris by Heinz Zourek, Director General of the European Commission’s DG Enterprise and Industry, and Jean-Jacques Dordain, Director General of ESA. This agreement follows on from the EU Regulation that was adopted in October 2010 for the Global Monitoring for Environment and Security (GMES) program. The additional funding demonstrates that the existing agreement has been working well and cements the trust the European Union has in ESA to execute its role in realizing the GMES program. GMES is a unique endeavour that will provide decision-makers with access to accurate and timely information services to manage the environment, understand and mitigate the effects of climate change, and ensure civil security.

Since the success of GMES hinges largely on the provision of robust satellite data, ESA is tasked with coordinating the program’s space component. This includes developing, launching and operating five families of Sentinel satellites, and making the data from these dedicated missions and from other space agencies available for GMES services. This transfer of funds to ESA, which has been appropriated from the EC’s Seventh Framework Program and GMES Initial Operations Program, will bridge the gap until the next Multi-annual Financial Framework comes into play in 2014.

The first three Sentinel missions are designed to orbit in pairs, thereby offering maximum coverage of Earth’s surface. This latest injection of funds will cover the costs for operating the first satellites until the new operational EU funds become available. It will also provide initial funds that will allow the preparation of contracts for the launch of the second satellites that make up the Sentinel pairs. 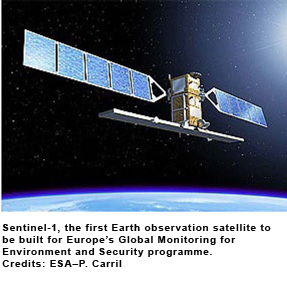 After extensive validation of the SSULI sensor software and derived atmospheric specification, the Air Force Weather Agency received a formal letter from the Defense Weather Systems Directorate (DWSD) at the Air Force Space and Missile Systems Center (SMC) recommending that they begin using the SSULI data as inputs into Space Weather models and also as standalone data products.

“These datasets now in use at the Air Force Weather Agency provide key understanding of the atmosphere for both Department of Defense and civilian users,” said Sean Lynch, program manager, NRL Spacecraft Engineering Department.

SSULI measures vertical profiles of the natural airglow radiation from atoms, molecules, and ions in the upper atmosphere and ionosphere from low Earth orbit aboard the DMSP satellite. It builds on the successes of the NRL High Resolution Airglow/Aurora Spectroscopy (HIRAAS) experiment flown aboard the Department of Defense (DoD) Space Test Program (STP) Advanced Research and Global Observations Satellite (ARGOS). SSULI makes measurements from the extreme ultraviolet (EUV) to the far ultraviolet (FUV) over the wavelength range of 80 to 170 nanometers (nm) with a 1.8 nm resolution. SSULI also measures the electron density and neutral density profiles of the emitting atmospheric constituents. 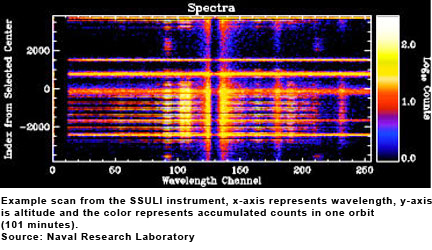 SSULI uses a spectrograph with a mirror capable of scanning below the satellite horizon from 10 to 27 degrees every 90 seconds. These observations represent a vertical slice of the Earth’s atmosphere from 750 to 50 kilometers (km) in depth. Use of these data enables the development of new techniques for global ionospheric remote sensing and new models of global electron density variation.

The DoD Defense Meteorological Satellite Program (DMSP) is managed by the Space and Missile Systems Center (SMC), Los Angeles Air Force Base, Calififornia, and command and control is provided by a joint-operational team at the National Oceanic and Atmospheric Administration (NOAA), Suitland, Maryland. The DMSP mission is to generate terrestrial and space weather data for operational forces worldwide. The Air Force is the Department of Defense’s executive agent for this program. The data from this program is also furnished to the civilian community through the Department of Commerce. 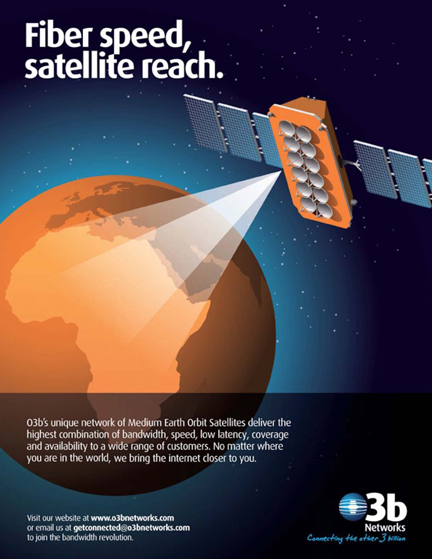