Success is accompanied by an exhilaration that lifts the spirits of all involved. Such is especially true of launches... whether a client is commercial or a member of the mil/gov markets, placing into orbit a crucially needed satellite is an accomplishment requiring intense scrutiny for each and every aspect of the launch build and satellite placement. A company that has certainly enjoyed its fair share of such success is... United Launch Alliance (ULA). 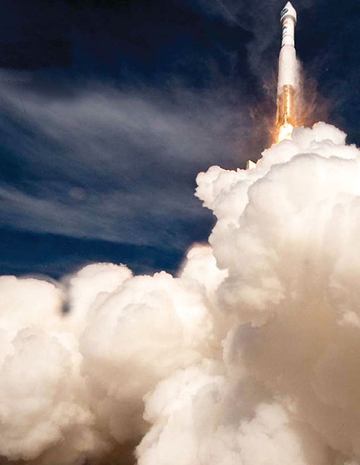 The EELV program was established by the United States Air Force to provide assured access to space for Department of Defense and other government payloads. The commercially developed EELVs support the full range of government mission requirements, while delivering on schedule and providing a 33 percent cost savings over the heritage Atlas, Delta and Titan IV launch systems.

Kudos...
“For more than 50 years, Atlas and Delta launch vehicles have supported America’s dominance in space, launching weather, communications and national security missions that protect and improve life on Earth, as well as science and exploration missions that improve our understanding of the universe,” said Michael Gass, ULA president and CEO. “ULA is so very proud to serve our customers and is truly humbled by the trust they place in us by allowing us to put their critical and most valuable assets of our nation into space.”

“Congratulations to the entire joint EELV team on the 10th anniversary of the program and achievement of 50 plus successful launch missions,” said Roger S. Correll, Air Force Program Executive Officer, Space Launch. “The reliable performance of EELV is a critical enabler of our war-fighting and national security intelligence missions. Each and every day soldiers, sailors, airmen, Marines and intelligence operators rely on the satellite capabilities EELV enables. We look forward to continued performance excellence as EELV maintains support to National Security Space.” This statement is highly important, for the commercially developed Atlas V and Delta IV are the only fully certified launch vehicles capable of supporting the full range of government launch requirements.

“Congratulations to the EELV and ULA teams on the 10th anniversary of EELV,” said Betty Sapp, director, National Reconnaissance Office. “The reliable performance of EELV is a significant enabler of our national security mission. We look forward to sustained excellent performance as EELV continues to support the Intelligence Community and Department of Defense.” 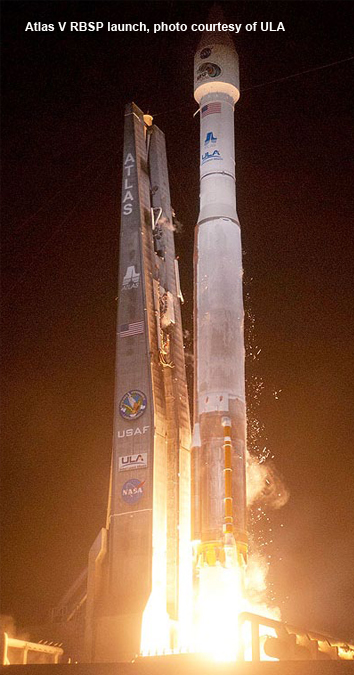 Since the first EELV launch in 2002, EELV has delivered extraordinary capabilities for the nation. Atlas V has launched 33 times and Delta IV has launched 20 times, delivering nine commercial payloads, 10 NASA spacecraft and 34 national security satellites. Currently, ULA is on track to complete its most aggressive EELV launch campaign to date.

The Belts-way
In example, a recent ULA launch addressed an area most spacecraft try to avoid—the Van Allen Belts, which are two doughnut-shaped regions around Earth filled with “killer electrons.”

A United Launch Alliance Atlas V rocket carrying the Radiation Belt Storm Probes (RBSP), the first twin-spacecraft for NASA, lifted off from Space Launch Complex-41 at Cape Canaveral on September 3rd. These two, heavily-shielded spacecraft were launched directly into the belts. The Radiation Belt Storm Probes are on a NASA two-year mission to study the Van Allen Belts and to unravel the mystery of their unpredictability. This was ULA’s 7th launch of the year, the 32nd Atlas V launch, and marked the 63rd launch since ULA was formed in December 2006.

“The ULA team and our many mission partners are very proud of our role in delivering the twin RBPS spacecraft to orbit to conduct research about our space weather and gather important data that impacts our everyday life on Earth,” said Jim Sponnick, ULA vice president, Mission Operations. “The successful launch of this mission is a tribute to the partnerships with the highly skilled and professional teams from NASA’s Launch Services Program and The Johns Hopkins University Applied Physics Laboratory.”

This mission was launched aboard an Atlas V EELV 401 configuration vehicle, which includes a 4m diameter payload fairing. The Atlas booster for this mission was powered by the RD AMROSS RD-180 engine and the Centaur upper stage was powered by a single Pratt & Whitney Rocketdyne RL10A-4 engine.

RBSP will explore space weather—changes in Earth’s space environment caused by the sun—that can disable satellites, create power grid failures, and disrupt GPS service. The mission will also allow researchers to understand fundamental radiation and particle acceleration processes throughout the universe. The belts are affected by solar storms and coronal mass ejections and sometimes swell dramatically. When this occurs, they can pose dangers to communications, GPS satellites and human spaceflight.

“Scientists will learn in unprecedented detail how the radiation belts are populated with charged particles, what causes them to change and how these processes affect the upper reaches of the atmosphere around Earth,” said John Grunsfeld, associate administrator for the Science Mission Directorate at NASA’s headquarters in Washington. “The information collected from these probes will benefit the public by allowing us to better protect our satellites and understand how space weather affects communications and technology on Earth.”

The two satellites, each weighing just less than 1,500 pounds, comprise the first dual-spacecraft mission specifically created to investigate this hazardous regions of near-Earth space, known as the radiation belts.

“We have never before sent such comprehensive and high-quality instruments to study high radiation regions of space,” said Barry Mauk, RBSP project scientist at the Johns Hopkins University’s Applied Physics Laboratory (APL) in Laurel, Maryland. “RBSP was crafted to help us learn more about, and ultimately predict, the response of the radiation belts to solar inputs.” 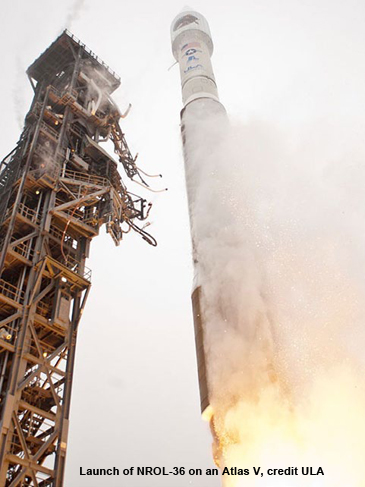 The hardy RBSP satellites will spend the next two years looping through every part of both of the Van Allen belts. By having two spacecraft in different regions of the belts at the same time, scientists finally will be able to gather data from within the belts themselves, learning how they change over space and time. Designers fortified RBSP with special protective plating and rugged electronics to operate and survive within this punishing region of space that other spacecraft avoid. In addition, a space weather broadcast will transmit selected data from those instruments around the clock, giving researchers a check on current conditions near Earth.

“The excitement of seeing the spacecraft in orbit and beginning to perform science measurements is like no other thrill,” said Richard Fitzgerald, RBSP project manager at APL. “The entire RBSP team, from across every organization, worked together to produce an amazing pair of spacecraft.”

For the 60 days following the launch, operators will power up all flight systems and science instruments and deploy long antenna booms, two of which are more than 54 yards long. Data about the particles that swirl through the belts, and the fields and waves that transport them, will be gathered by five instrument suites designed and operated by teams at the New Jersey Institute of Technology in Newark; the University of Iowa in Iowa City; University of Minnesota in Minneapolis; and the University of New Hampshire in Durham; and the National Reconnaissance Office in Chantilly, Virginia. The data will be analyzed by scientists across the nation almost immediately.

Security Sat...
The next successful event for ULA was the Atlas launch of NROL-36 for National Defense... as well as cool Cubes that were also delivered to their target via this launch. On Thursday, September 13, from Space Launch Complex (SLC)-3 at Vandenberg Air Force Base, California, the launch occurred with precision—the mission is in support of national defense. 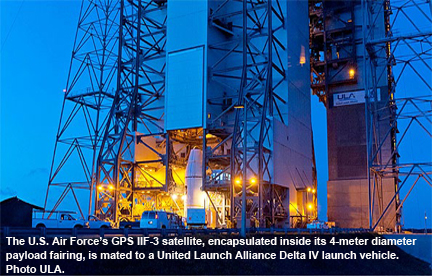 “The successful launch of the NROL-36 mission occurred on the same day as the national memorial service honoring American hero Neil Armstrong. The scientists and engineers developing and operating these remarkable current-day launch and spacecraft systems reflect Neil’s incredible legacy to mankind,” said Jim Sponnick, ULA vice president, Mission Operations. “This launch marks the fourth and final EELV mission for the NRO’s Road to Launch 2012 accomplished in the last five months. This launch tempo is a tribute to all of the mission partners’ dedication and continued focus on mission success—one launch at a time.”

This mission was launched aboard an Atlas V EELV 401 configuration vehicle, which included a 4m diameter payload fairing. The Atlas booster for this mission was powered by the RD AMROSS RD-180 engine and the Centaur upper stage was powered by a single Pratt & Whitney Rocketdyne RL10A-4 engine.

In addition to the NROL-36 payload, 11 CubeSats took advantage of the available volume and structural capacity of the Atlas V launch vehicle for a ride share. The NRO and ULA partnered to develop an Aft Bulkhead Carrier (ABC) on the Centaur second stage, which is a platform for accommodating auxiliary payloads aboard Atlas V missions.

Affixed to the ABC was an auxiliary payload called Operationally Unique Technologies Satellite, or OUTSat, carrying the 11 CubeSats in various configurations. The CubeSats are sponsored by the NRO Mission Support Directorate and NASA’s Launch Support Program, and were developed by the U.S.A.F.’s Space and Missile Defense Command, The Aerospace Corporation, University of Southern California, University of Colorado, California Polytechnic State University, Morehead State University, University of California Berkeley and the Lawrence Livermore National Lab.

“These auxiliary payloads are the first of their kind for an Atlas V mission,” said Sponnick. “We are pleased we could support the NRO, NASA, and all of the associated institutions to deliver these important CubeSats which will study space weather and communications, debris mitigation, maritime shipping container tracking as well as space flight safety and orbit refinement.”

Latest Launch
Just prior to going to “press” with this issue on October 4th, ULA’s Delta IV launched the U.S.A.F.’s GPS IIF-3 from Space Launch Complex 37 at Cape Canaveral Air Force Station in Florida. The Navstar GPS is a constellation of satellites that provides navigation data to military and civilian users worldwide. The system is operated and controlled by the 50th Space Wing, located at Schriever Air Force Base, Colorado.

GPS uses 24 satellites, in six different planes, with a minimum of four satellites per plane, positioned in orbit approximately 11,000 miles above the Earth’s surface. The satellites continuously transmit digital radio signals pertaining to the exact time (using atomic clocks) and exact location of the satellites.

The GPS IIF series have a design life of 12 years. With the proper equipment, users can receive these signals to calculate time, location, and velocity. The signals are so accurate that time can be measured to within a millionth of a second, velocity within a fraction of a mile per hour, and location to within feet. Receivers have been developed for use in aircraft, ships, land vehicles, and to hand carry.

As a result of increased civil and commercial use as well as experience in military operations, the USAF has added the following capabilities and technologies to the GPS IIF series to sustain the space and control segments while improving mission performance:

Addressing The Accomplishments
Since the inaugural flights in 2002, Atlas V and Delta IV launch vehicles have delivered more than 50 critical capabilities including vital national security missions for the U.S. Air Force and National Reconnaissance Office, science and exploration payloads for NASA and commercial imaging and communications satellites.

ULA’s Atlas V and Delta IV launch vehicles provide a 33 percent cost savings over heritage launch systems and are the most commercially developed vehicles flying today, with Lockheed Martin and The Boeing Company having funded 80 percent of their development.

Developed by the United States Air Force to provide assured access to space for Department of Defense and other government payloads, the commercially developed EELV Program supports the full range of government mission requirements, while delivering on schedule and providing significant cost savings over the heritage launch systems.

Since 1998, NASA’s Launch Services Program has been based at Kennedy Space Center, Florida, and provides oversight as the designs of the rocket and mission are integrated with each other.

Additional information regarding United Launch Alliance may be obtained at their website.