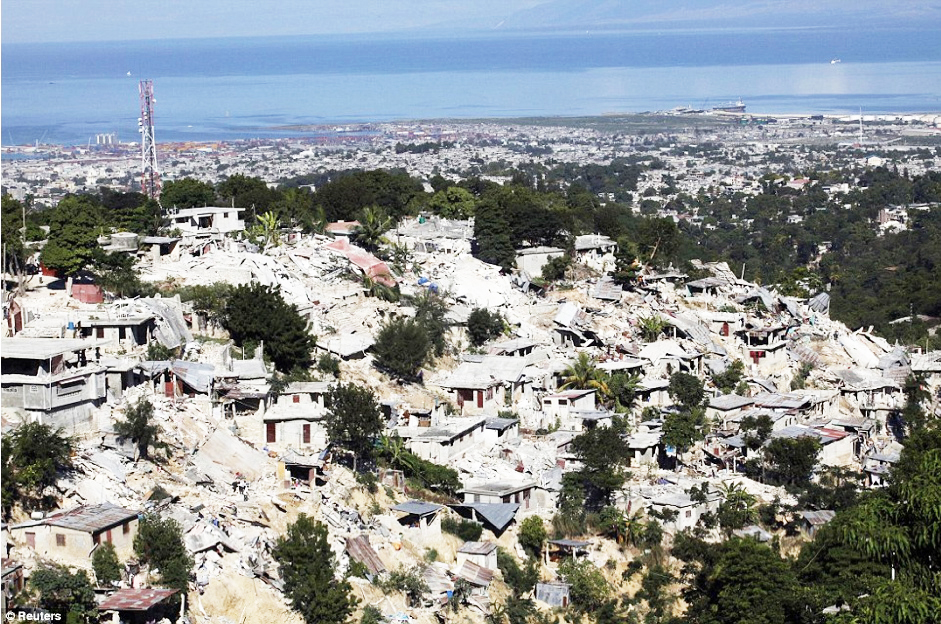 By now you have all probably seen heart breaking, high resolution satellite imagery of the destruction in Haiti. The speed with which GeoEye and DigitalGlobe disseminated these images around the world was truly amazing. With extensive databases of recent imagery, these companies were even able to provide side by side pictures of before and after.

By now you have all probably seen heart breaking, high resolution satellite imagery of the destruction in Haiti. The speed with which GeoEye and DigitalGlobe disseminated these images around the world was truly amazing. With extensive databases of recent imagery, these companies were even able to provide side by side pictures of before and after.

Google is also putting images from multiple sources into Google Earth together with maps, including earthquake epicenters, so that anyone with an Internet connection can freely access up to date imagery and related geographic information. 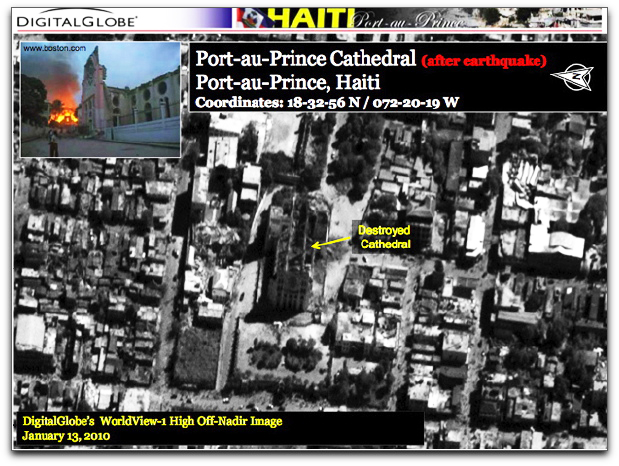 These satellite based capabilities are fundamentally changing the world’s ability to respond to disasters and, no doubt, played a major role in accelerating and energizing not only the relief efforts of many governments but also the charitable contributions of millions of people. On the ground these images continue to provide rescue and relief operations with critical intelligence information. Because of this capability hundreds of millions of dollars will move more expeditiously and be deployed more efficiently; yet it is almost for free. What is this capability worth to an ever more fragile and dangerous world?

As usual, satellites have also been crucial in providing the communication networks necessary to support rescue and relief efforts. The earthquake took out much of the landline and wireless infrastructure and even severed the submarine cable linking the island to the global network, but within literally hours, satellite firms were setting up emergency networks and in many cases even donating satellite capacity and equipment to governments, media and telecom companies and humanitarian organizations. This has been true of past disaster incidents as well, but this time the speed and magnitude of the support is quite breath taking.

I understand that Intelsat S.A. had a dedicated team and a fly-away system in Port-au-Prince airport almost immediately, providing on-site coordination and transmission services. They quickly established two communication networks — one in C-band and one in Ku-band, including Intelsat’s GlobalConnex Network Broadband service, using capacity on Intelsat 907 and Horizons 2 satellites.


Not to be out done, SES World Skies donated satellite capacity on five of its satellites (AMC-1, AMC-6, AMC-21, NSS-7 and NSS-806) plus access to teleport facilities. CapRock Government Services provided full end-to-end satellite communications support and connectivity to the U.S. Marines Corps.

Iridium had already pre-positioned its satellite handsets with a variety of services and organizations for their use in such emergencies, including local telephone companies and to Spirit Airlines, which has resumed flights in and out of Haiti. Inmarsat provided its Broadband Global Area Network (BGAN) terminals to Telecom without Borders and DBSD is making available to the U.S. government its S-band satellite capacity for two-way mobile communications or broadcast video services throughout Puerto Rico.

Stratos is providing Inmarsat, Iridium, and VSAT satellite equipment and services to several agencies and Spacenet is offering help through its existing services to Haiti. Globecomm has joined in, as has SkyTerra and SkyPort. PSSI is even donating its satellite trucks for a Haiti fund raising concert in the U.S. 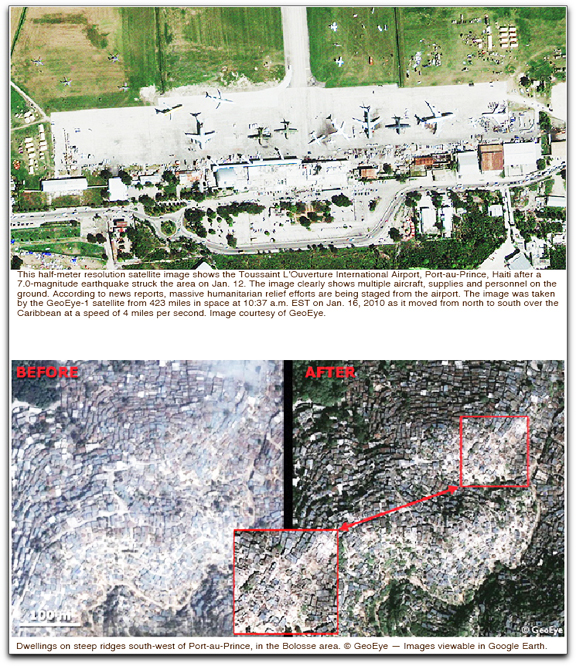 Perhaps with practice, the satellite industry and relief agencies are just getting better at disaster response or perhaps it is just the greater power, usability and availability of today’s satellite technology. Either way, there seems to have been vital lessons learned from previous disasters, not that we are now anywhere close to perfection. However, the importance of restoring communications quickly and broadly is now widely recognized as step one and the satellite industry has responded accordingly. 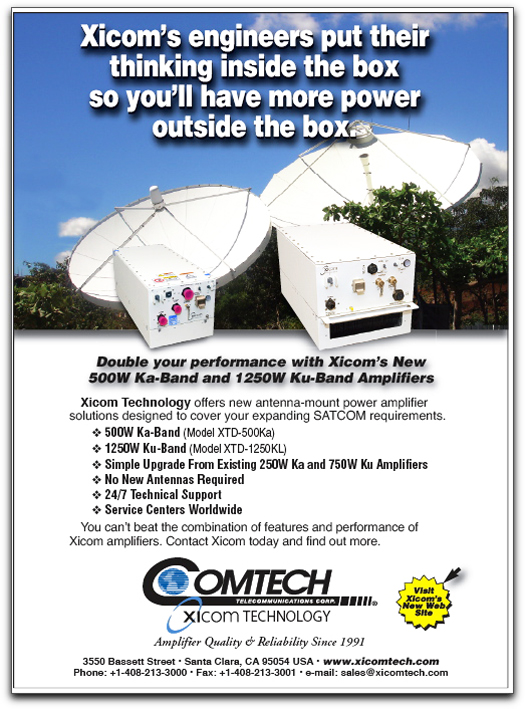 I am proud of the satellite industry for its progress and its generous contributions, but the scary part is that even today most of these communication efforts are being done on a somewhat ad hoc and uncoordinated basis. With an international effort involving many countries and dozens of agencies, who is in charge?

If robust and quick satellite communications is critical to saving lives and efficiently using disaster recovery resources, is patching together a multitude of solutions in real time the right strategy?

With electrical power we have learned our lesson from costly brown outs and black outs. Today, the electric grid is designed to have excess capacity to handle unusual peak loads (e.g., extremely hot summer days).

That peak capacity mostly sits idle and is therefore very expensive per kilowatt-hour of usage, but when needed its existence is critical to sustaining our lives and economy. Shouldn’t we also have peak capacity for satellite communications; capacity that is dedicated and ready at a moment’s notice for disasters and with agencies and users trained to use it? What, if like Haiti, a once in 200 year earthquake hit Los Angeles? Or, New York was attacked by a weapon of mass destruction and you had 10 million people at risk and without communications? How forgiving would the citizens be that their government did not plan for such a scenario? Just as with hurricane Katrina, there would be headlines that such a need was foreseeable and the politicians did nothing. After all, some Black Swans are really just Grey Swans. We know a “Big One” will hit one day and we know the terrorists want to hit us hard. 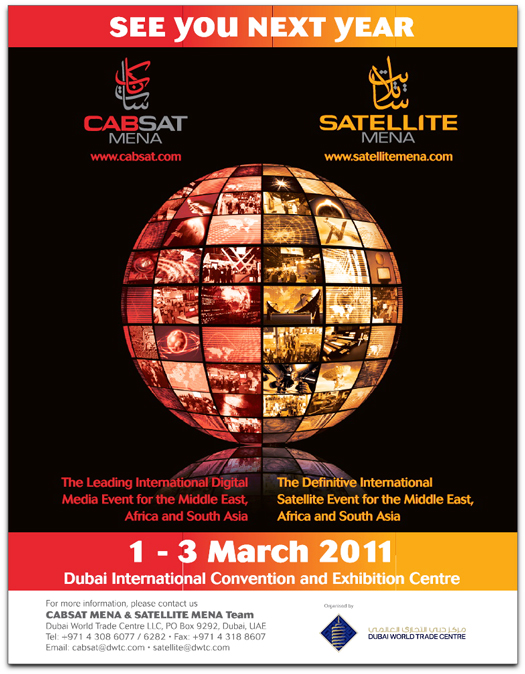 There is no technological excuse. The technology to establish emergency satellite connectivity is well in hand. With high throughput satellites and steerable spot beams, we now have the ability to launch what would basically be a nationwide or even regional insurance policy; guaranteeing the availability of dedicated fast 2-way bandwidth targetable to an impacted area in the event of a mega-disaster. A robust capability could also be built over time by adding one or more steerable beams to each new FSS satellite that is placed into GEO. With excess MSS capacity (Iridium, Globalstar, SkyTerra, TerreStar and ICO), we also have the ability to lock up significant capacity for emergency mobile communications.

The conceptual leap that has to be made is that, like peak electrical generating capacity that mostly sits idle, this emergency satellite capacity is just as vital to our livelihoods. Its cost should, therefore, not be compared to normal marginal usage, but to the value delivered when needed. If we are truly serious about homeland defense, whether against manmade or natural disasters, shouldn’t significant dedicated satellite capacity be part of the planning? 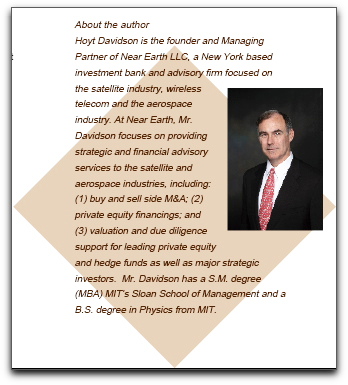 Having the government as an anchor tenant for an appreciable amount of stand-by capacity would also enhance the ability of satellite companies, particularly the MSS and satellite broadband providers, to finance, launch and maintain their businesses and thereby offer consumers and corporations affordable 21st century satellite services. To hold the cost down, any standby capacity acquired by the government could be made available for resell by the satellite operators on a preemptable basis. There are many other potential public/private models that might work. The key point is that like the U.S. government’s support of Iridium, GeoEye and DigitalGlobe, wise investments of taxpayer dollars have generated substantial and global benefits. Let’s remember that the next time we view a satellite image on the front page of our morning newspaper or hear about a doctor in Haiti using an Iridium phone to order medical supplies.

When it comes to disaster relief and recovery, isn’t it time to get serious and plan for tomorrow’s needs? The technology is here; we just need the political will.