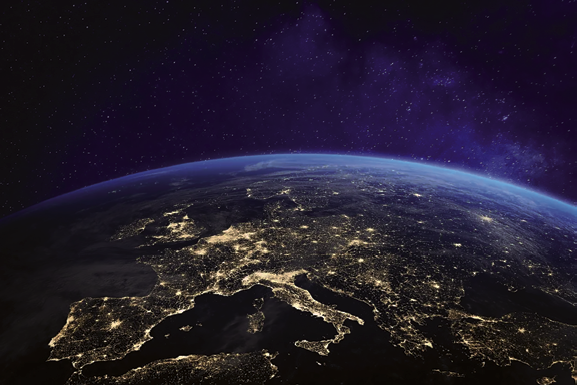 The words ‘Satellite IoT’ or ‘Satellite M2M’ tend to elicit pained or dismissive reactions — notions of high cost and bulky equipment drive the perception that applicability is limited to a few niche and insignificant markets.

A revolution in low-cost satellite IoT connectivity is in progress. To put ‘low-cost’ in context, the range of Satellite IoT services can be categorized as follows:

• High Cost: The dominant service offered today, with terminals priced around $1,000, monthly ARPU around $50 to $100 and data throughput in the 100s of Kbits/sec. An example is Thuraya IP M2M: www.thuraya.com/thuraya-ip-m2m
• Medium Cost: Offerings with terminal prices in the $100s and monthly ARPU around $10 to $20. Examples include Spot X and Garmin inReach (assuming these can be considered IoT).
• Low Cost: This is the target of several companies, as Satellite IoT transitions to a mass market service, with connectivity module prices matching those of terrestrial IoT (perhaps $5 to $10), and monthly ARPU below $1. 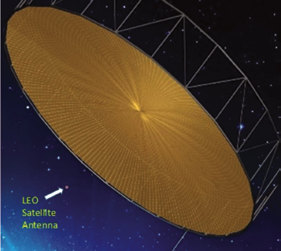 Most low-cost approaches center around the perception that Low Earth Orbit (LEO) smallsats provide the right platform for IoT connectivity.

eSAT Global has taken a different approach, uniquely basing their system on Geosynchronous Earth Orbit (GEO) Mobile Satellite System (MSS) satellites. While this difference of visions has yet to play out, the following key metrics seem to overwhelmingly favor eSAT’s GEO implementation:

• Cost per bit; approximately 100 times lower
• Terminal size and power; 10 to 50 times lower power
• System capacity; 100’s of times greater (for full constellations)
• Simplicity of implementation; given the low power, consistency of the view of the satellite, and benign nature of the channel
• Constant availability, 24/7
• Low message delay (latency), with transmission times under 2 seconds for alarms and commands
• Pre-existing GEO MSS satellites with a long history of reliable operation, so no need for heavy capital spending to create new infrastructure in space
• Suitability to 2-way operation; given the simplicity of tracking the near-stationary satellite channels
• Compatibility with the regulatory environment and availability of spectrum; where GEO systems have a mature allocation of suitable spectrum

• Chart 1 compares the antenna size of GEO and small LEO satellites, given the same frequency of operation, typical gains, and assuming a reflector antenna structure.
• Charts 2 and 3 illustrate the satellite locations and beams in the context of actual distances.
• Chart 4 illustrates the relative size of these antennas when viewed from the Earth at the edges of coverage.
• Chart 5 (on the following page) shows the corresponding coverage (and ability to concentrate power in beams). The small LEO satellite forms a single large (red) beam, while the GEO satellite forms the many small hexagonal beams. Note the duality between the perceived antenna sizes shown in Chart 4 and the ability to direct power in Chart 5. (That is, visualize the LEO antenna in Chart 4 being replicated to fill the GEO antenna, resulting in an image like Chart 5.) 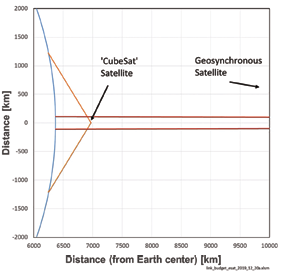 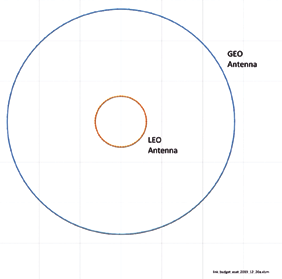 Chart 4: GEO vs. Small LEO antennas as seen from edge of coverage

The capacity of GEO systems is not only driven by the antenna gain differences, but also by the power available at the satellite, resulting in a difference ratio in delivered power per square meter on the Earth’s surface of about 10,000-to-1.

For purposes of diving a little deeper the following discussion focuses on a particular use case, namely the tracking and monitoring of livestock, and shows that eSAT’s connectivity solution is well suited to the task and superior to LEO based solutions. In addition, in many cases eSAT offers a solution that is superior to popular terrestrial technologies. The application addressed is beef cattle monitoring in Australia, for reasons explained below. 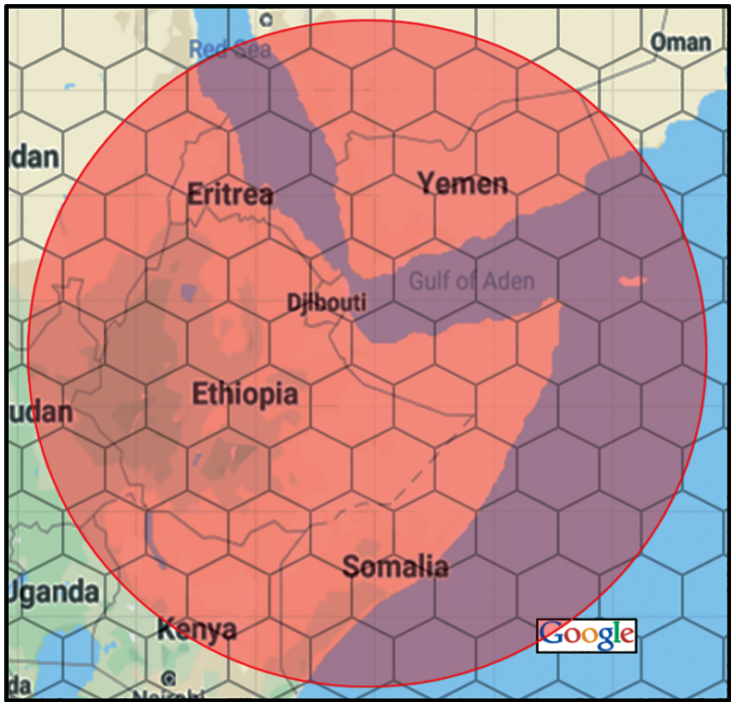 1. There is clear economic benefit to ranchers that can be realized through the comprehensive monitoring and tracking of livestock, i.e., ascertaining and acting upon the Location, Behavior, and State (LBS) of each animal. The qualitative factors underpinning these economic benefits are:

From studies and analyses conducted in Australia2, quantitative estimates of benefit per head of beef cattle are around A$50/year. eSAT intends to charge less than A$10/year per head for data services, which appears to be an attractive price point to assure that a majority of the economic benefits flow to the ranchers after accounting for other system costs. When compared to pricing announced by LEO/CubeSat solution providers the eSAT service pricing represents a savings of more than 70% for nominal use cases. (See a report from the Australian Meat and Livestock Association: See Ref. 2., in particular, see pp. 6-7.)

2. Beef cattle are generally not covered by cellular or other terrestrial wireless systems.

Cattle tend to spend long periods far from any human structures, and generally live in areas that humans do not frequent. This implies that most large ranches cannot be adequately covered by cellular systems. Another terrestrial wireless technology, LoRa, is starting to be used in some places, but a network of multiple base stations must be built, maintained and managed for each large ranch. 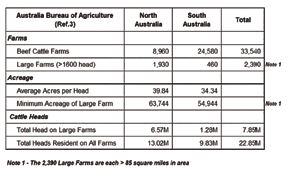 Other terrestrial alternatives, such as Sigfox, suffer from the same vulnerability as cellular —– no coverage in spaces friendly to cattle. Others, such as Wi-Fi, share the weakness of LoRa, that is the transferring of responsibility for infrastructure to ranchers. SATCOM solutions based on LEO-Cubesat architecture cannot compete for a number of reasons summarized in prior eSAT Global’s article, IoT + Geosatellites... A Perfect Match (Ref. 1.) published in September of 2019.

Why Australia First?
From public records it is clear that most of Australia’s beef cattle do not live where people live and, by logical extension, do live where there is no mobile data coverage. Map 1 and Figure 1 (Ref. 3 and Ref. 4) show population density maps for cattle and then for people as of 2014-15.

Furthermore, more than a third of the national herd, which is approximately 8 million head, reside on ranches with areas larger than 85 square miles each – posing a major disadvantage for rancher-owned wireless solutions such as Wi-Fi and LoRa.

An important note, Australia enjoys very strong national industry traceability standards promulgated by the Meat and Livestock Association (MLA) which have been universally adopted since their inception over twenty years ago. As can be seen from the MLA documents cited this first initiative has been complemented by programs for food safety, animal welfare, and biosecurity.

These well organized and successful programs have led to a national market that is conditioned to continually incorporate new, enabling technologies as they become available. In particular the Integrity Systems Company, the quality assurance body within the MLA, have issued their roadmap to 2025 and in it call for extending whole-of-life traceability to include real-time interactive monitoring and tracking LBS for all livestock (See Ref. 5 and Ref. 6).

eSAT has started working with leading Australian LBS solution providers and is planning to initiate trials in the coming year.

David Lyon is the
Executive Chairman
at eSAT Global. He is
a technologist and an
entrepreneur who has
focused on satellite
and terrestrial wireless
communication networks
since the 1980s.

Mike Parr is the
CTO at eSAT Global.
He has been a system
engineer in the satellite
industry for more than
30 years, where most
of that experience has
been within the mobile
satellite arena. His
email is
michael.parr@esatglobal.com

Direct, narrow-band links to satellites are the most appropriate connectivity option for many remote IoT applications, including those described in this article. Among the emerging narrow-band satellite IoT alternatives, the GEO satellite system from eSAT provides the lowest-cost, lowest-power, best-performing communications approach.