PhoneSat 2.4, NASA’s next generation smartphone CubeSat, has phoned home. The tiny spacecraft that uses an off-the-shelf smartphone for a brain has completed checkout and sent back data confirming all systems are “go” for the spry spacefarer. 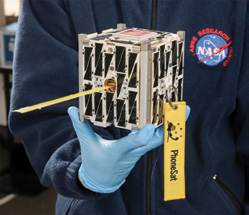 PhoneSat 2.4, a cube approximately four inches square, weighs only about 2.2 pounds, and was developed at NASA’s Ames Research Center in Moffett Field, Calif. It is first of the PhoneSat family to use a two-way S-band radio, allowing engineers to command the satellite from Earth. It is confirming the viability of using smartphones and other commercially available electronics in satellites destined for Low Earth Orbit (LEO).

“It’s great to hear from NASA’s most recent CubeSat spacecraft,” said Michael Gazarik, NASA’s associate administrator for space technology in Washington. “NASA is committed to opening up the high frontier to a new generation of explorers who can take advantage of these sorts of small satellites to do science and technology development at a fraction of the cost of larger, more complex spacecraft.”

In April, NASA successfully demonstrated a one-week mission with PhoneSat 1.0. With an expected orbital lifetime of up to one year, PhoneSat 2.4 will measure how well commercially developed components perform in space over a long period of time. This innovative application of commercially developed technologies for use in space provides for low-cost, low-risk, highly repetitive missions to meet some unique NASA science and exploration needs.

The spacecraft was among 11 agency-sponsored cubesats deployed on November 19, 2013, by a NASA-built Nanosatellite Launch Adapter System aboard an Orbital Sciences Minotaur 1 rocket for the U.S. Air Force from the Mid-Atlantic Regional Spaceport at NASA’s Wallops Flight Facility in Virginia. 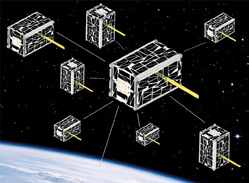 PhoneSat 2.4 also will test a system to control the orientation of the CubeSat in space. Like the earlier PhoneSat 1, PhoneSat 2.4 uses a Nexus S smartphone made by Samsung Electronics running Google’s Android operating system. Santa Clara University in California is providing the ground station for the mission.

The smartphone provides many of the functions the satellite needs to operate, such as computation, memory, ready-made interfaces for communications, navigation and power, all assembled in a rugged package before launch. Data from the satellite’s subsystems, including the smartphone, the power system and orientation control system are being downlinked over amateur radio at a frequency of 437.425MHz.

The next PhoneSat, version 2.5, is scheduled to launch in February, hitching a ride aboard a commercial SpaceX rocket. That spacecraft also is expected to perform in Earth orbit for several months and continue testing the two-way radio and orientation systems. The PhoneSat Project is managed by the Engineering Directorate at NASA’s Ames Research Center in Moffett Field, California.

The PhoneSat series of missions are pathfinders for NASA’s next Small Spacecraft Technology mission, the Edison Demonstration of Smallsat Networks (EDSN). The EDSN mission is composed of eight identical 1.5-unit CubeSats, which are each approximately 4 inches by 4 inches by 6 inches in size and weighing about 5.5 pounds, that will be deployed during a launch from Kauai, Hawaii in 2014. 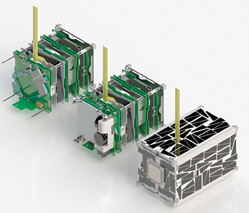 Rapid production and delivery of multiple spacecraft is one of the objectives of the EDSN project. Image courtesy of NASA Ames Research Center.

The EDSN mission will demonstrate the concept of using many small spacecraft in a coordinated cluster to study the space environment and space-to-space communications techniques. The eight EDSN satellites each will have a Nexus S smartphone for satellite command and data handling, with a scientific instrument added as a payload on each spacecraft.

During EDSN, each CubeSat will make science measurements and transmit the data to the others while any one of them can then transmit all of the collected data to a ground station. This versatility in command and control could make possible large swarms of satellites to affordably monitor Earth’s climate, space weather and other global-scale phenomena.