The satellite was shipped to the Cape Canaveral, Florida, launch site, where it is scheduled to be integrated as a secondary payload on the SpaceX Falcon 9 launch vehicle as part of the first Cargo Resupply Services (CRS) mission to the International Space Station.

The satellite’s deployment, after the Dragon capsule is released, will define it as the first secondary commercial payload launch on a CRS mission, fulfilling the potential of government and commercial missions to coexist in a single launch. The prototype satellite, currently scheduled to launch on October 7, 2012, is based on SNC’s SN-100 satellite bus, with capacity to launch highly capable optical, RF and science payloads. The SN-100 is specifically designed to be rapidly produced on SNC’s fleet satellite production line.

This spacecraft is the first of an 18 satellite constellation being designed, built and managed at SNC’s Louisville, Colorado, facility. SNC successfully directed the development and integration of the complex communications payload, and assisted in the key roles of launch planning and mission operations. In preparation for launch, SNC has installed a state-of-the-art satellite operations center. The Louisville Satellite Operations Center will support essential communications with the satellite prior to launch and during early on-orbit checkout and operations.

What an amazing first show of capabilities as Astrium, Europe’s major space company, is preparing a new technology mission for the maintenance and disposal of satellites. 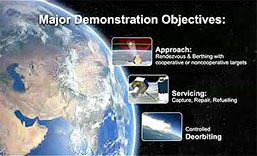 Today, at the ILA Berlin Air Show, the DLR Space Administration announced Astrium Friedrichshafen will be the prime contractor for the definition phase of the DEOS (German orbital servicing mission) project.
The order is worth a total of around 13 million euros. The definition phase is the last decisive step before construction begins on the space vehicles themselves.

The DEOS project will for the first time demonstrate technologies for the controlled in-orbit disposal of a defective satellite. In addition, DEOS will practice how to complete maintenance tasks—refuelling in particular— that extend the service life of satellites. DEOS consists of two satellites, a “client” and a “servicer”. The client acts as the satellite requiring maintenance or disposal. The servicer carries out the necessary work on the client. The two satellites will be launched together and brought into orbit at a height of 550 kilometres. According to current planning, DEOS will be ready for launch in 2018.

Testing of disposal and maintenance on a client satellite specially launched for this purpose, as opposed to tests on old existing satellites, means that a wide variety of defects can be simulated. This enables DEOS to demonstrate a complete range of relevant tasks, right up to capturing a satellite that is spinning out of control. Experiments will be performed in an increasing order of difficulty. 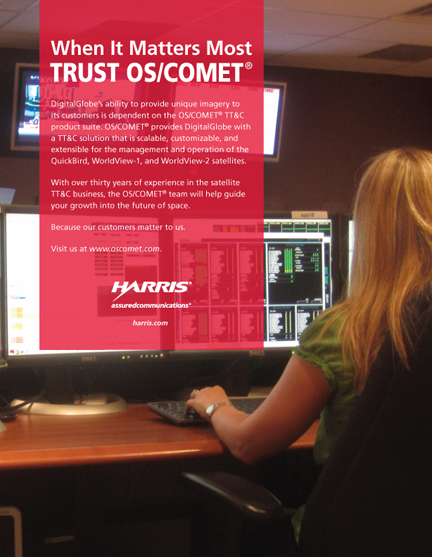 The maintenance or disposal of a satellite requires mastering a large number of individual tasks: the servicer has to approach the client without a tracking signal or similar help from the client. The servicer has to remain at a distance of around one metre from the client for an extended period (>1 orbit) while adjusting its position to avoid collision with the client. Throughout the orbit, the approach navigation and attitude control must function reliably even when the satellite is in the full glare of the sun or in eclipse.

Before maintenance work can begin, the servicer must establish a firm grip on the client satellite. It must be capable of establishing electrical connections with the client and connecting a vacuum-tight fuel valve. In order to perform such a wide range of tasks, DEOS will be equipped with a robot arm that can move through seven degrees of freedom.

To a large extent, DEOS is reliant on technologies that have not yet been tested for space operations. In the definition phase, therefore, initial prototypes of the key technologies will be developed, so that subsequent realisation of the project can progress swiftly. This development work will be carried out by Astrium itself and by specialist companies and research institutions subcontracted by Astrium. 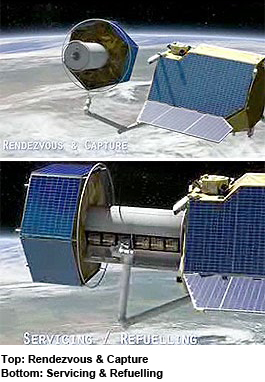 Astrium’s Friedrichshafen location has long been the leader in the field of space robotics in Germany. A particular highlight was the ROTEX experiment on the Spacelab D-2 mission in 1993, which was the first time a robot arm in space was controlled in real-time from the ground. The Bremen location also worked on the European ATV supply vehicle, with which Europe regularly delivers new supplies to the International Space Station.

The DEOS project will be carried out by DLR Space Administration with funding from the German Federal Ministry of Economics and Technology (BMWi). Sustainable space operations has been a stated objective of the German government’s space strategy since autumn 2010. This made in-orbit maintenance on “uncooperative” satellites—and even disposing of them when necessary—a topic of major interest at the National Conference on Space Robotics 2012, which was held in Berlin in March 2012 by the DLR with the support of the BMWi.

DEOS allows Germany to continue its long and successful tradition of providing innovative robotics technology for use in space. And DEOS represents the final technological step in developing robotics that can be used in the disposal of dangerous space debris and the cost-effective extension of the service lives of satellites that are already in orbit. More information about DEOS is available here...

Loaf Of Bread Sized Satellite Could Have Huge Impact

USC’s Space Engineering Research Center (SERC) launched the first “CubeSat”, a miniature satellite built in cubic compartments—with the ability to deploy a parabolic dish and track a point on the surface of the Earth. 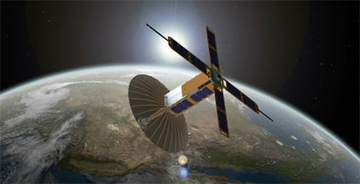 The satellite, dubbed “Aeneas”, is the first CubeSat with this tracking capability, which it will use in an attempt to track shipping containers on the open ocean.  While satellites are generally operated pointed towards a fixed location (the earth, the sun, a star, etc.), Aeneas will employ three-axis stabilization control to track the moving containers, demonstrating that global satellite tracking can be performed by nanosatellites.

Part of a widespread effort to build nanosatellites at relatively low cost, CubeSats represent a cost-effective way to explore new satellite architectures and address niche applications, as they can easily piggyback onto other space launches.  What used to require a $6 million spacecraft and a $20 million launch could theoretically be done for a fraction of the price, provided the mission is not too complex.

“This is yet another testament to the great nanosatellite work being done at USC Information Sciences Institute and the Viterbi School’s Astronautical Engineering Department,” said Yannis C. Yortsos, Dean of the USC Viterbi School of Engineering.  “It continues a strong tradition of USC engineering involvement in space. We couldn’t be more pleased to be part of the Aeneas mission.”

Aeneas was launched on a United Launch Alliance Atlas V rocket from Vandenberg Air Force Base near Lompoc, California.

Built at USC’s Information Sciences Institute (ISI) by a rotating team of students and staff members, Aeneas marks two firsts for cube satellites: It will be both the first CubeSat in history to ground track (or track a point on the surface of the earth) and the first to deploy a half-meter parabolic dish, the largest deployable from a nanosatellite.  A system nearly three years in the making, the dish is a high gain antenna, to be deployed from a structure not much larger than a loaf of bread. 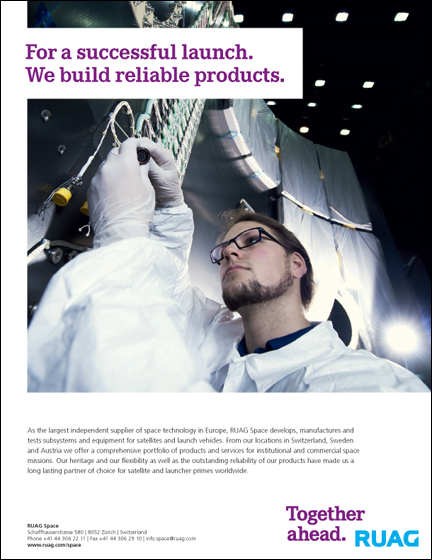 Aeneas’ main payload is a 1-watt WiFi-like transceiver that will be used to track the cargo containers and that will aid the Department of Homeland Security in its Secure Corridors program.  A secondary payload that was designed and built but missed integration was a space qualification demonstration of the MAESTRO (the next generation of space computer) processor developed by Boeing and funded by the National Reconnaissance Office (NRO).  A 49-core processor, the chip is being launched to test its capability of working in orbit. As SERC’s Associate Director Tim Barrett explains, “You can’t fly something in space unless it’s flown in space.”  The MAESTRO processor is now scheduled to fly on an upcoming launch.

Work on Aeneas began in the fall of 2009, but was briefly interrupted when SERC was approved to design, build and launch Caerus, USC’s first nanosatellite subsystem, two years ago. The brief interruption proved fruitful, however, enabling the team to utilize already space-tested equipment built for the earlier project on Aeneas.

After its launch, Aeneas will be monitored by SERC students and employees from ground stations at USC’s University Park and ISI campuses, as well as a mobile ground station in Barrett’s backyard.  The mission is expected to be completed in three months, though the satellite itself could remain in orbit for several years.

SERC was established in 2006 by staff from USC ISI’s Space Group and the faculty of USC’s Department of Astronautical Engineering, including Professor Joseph Kunc, SERC’s director since its creation.  Created out of discussions with local space industry and national labs, SERC seeks to develop sustainable and achievable low cost rapid design-to-orbit space systems.

“Most industry professionals only see a few space flights in their entire career. The fact that we’ve had two in only a few years is huge,” said Barrett.

Adds Kunc, “An educational hands-on program where undergraduates from freshman to seniors can directly participate in the designing, building and testing of fully operational space hardware and software is indeed a very unique accomplishment.”  In fact, when launched in May 2010, Caerus contained a deployment burn wire designed by a USC freshman.

In fact, SERC may even surpass that feat as staff and students already have other Nano-Sat projects underway, including the use and test of a space qualification MAESTRO (the next generation of space computer) processor, a Ka band radio science experiment and expanding CubeSats from month-long missions to 36 month mission life NanoSats.  SERC’s willingness and ability to produce and integrate Aeneas into its upcoming government launch resulted in the opportunity to fly on the next NanoSat-equipped government mission scheduled for the fall of 2013.

“...meets the exacting, high-bandwidth, connectivity requirements now demanded by forces around the world to address an increasingly difficult operating environment. It is an extremely complex sector...” 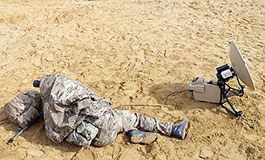 Vislink International has announced the immediate availability of the military spec. Mantis MSAT, the world’s smallest and lightest satellite data terminal. At 12.5kg (27.5 lbs) MSAT is designed for one man operation in challenging operational environments. It is a rugged terminal, resistant to extreme environmental conditions, that is deployed from a single lightweight backpack.

Stephen Rudd, Chief Executive of Vislink International, said, “MSAT meets the exacting, high-bandwidth, connectivity requirements now demanded by forces around the world to address an increasingly difficult operating environment. It is an extremely complex sector but we have not only met the core need, we have created a rugged, highly reliable and lightweight package that can be deployed anywhere in the world.

At only 27.5lbs (12.5kg) it is the lightest satellite data terminal on the market and compliments a range of manned and unmanned solutions Vislink already provides for land, sea and air based communications and surveillance.”

Vislink developed the military spec. MSAT to address demand from forces around the world that require a highly portable solution capable of delivering high bandwidth voice and data communications.

Providing up to 5Mbps upstream data throughput, MSAT can be used to deliver high definition video intelligence in addition to standard voice and data requirements. Even in the most hostile operating environments, the terminal can be unpacked and operational within five minutes.

MSAT meets the MIL 810F & DEF-STAN military specifications for shock, vibration, sand and rain and is provided as a ‘one box’ solution incorporating antenna, modem and all electronics. A high performance parabolic antenna is coupled, according to customer requirements, with interchangeable modem & encoder options. The terminal is available to operate in X-, Ka- and Ku- bands. 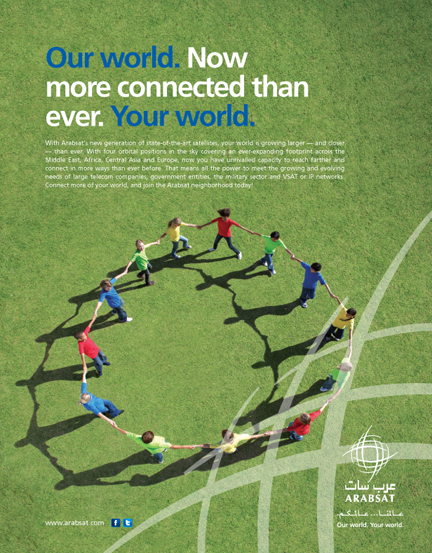