Consumer demand for high-bandwidth telecommunications and broadcast services is increasing, causing the satellite industry to look for additional capacity beyond the Ku- and C- satellite frequency bands that have been traditionally used to support these services. The little used Ka-band, which encompasses the frequency area between 26.5 and 40 GHz, offers a solution to the industry’s current capacity and bandwidth limitations, but is not without its own shortcomings.

Being situated in a higher frequency range than the Ku- and C-bands, the Ka-band is impacted more by weather effects such as rain, wet snow, and moisture, which is shown to cause higher temporary attenuation, otherwise known as rain fade, than what is typically experienced in lower frequency bands.

Next-generation satellite and communications technologies are helping to mitigate the effects of rain fade in the Ka-band, enabling it to support the growing requirements of broadcast, professional, and consumer services. This article provides a comprehensive overview of the satellite and communications technologies designed to eliminate attenuation issues caused by weather, maximize efficiencies, and optimize the quality of service for satellite services delivered via the Ka-band. The article also examines the key applications for those services.

Methods For Minimizing Rain Fade Issues In The Ka-Band
While the Ka-band is more sensitive to rain fade than the Ku- and C-bands, there are mitigation techniques available to ensure wider adoption of the satellite spectrum. For instance, antenna gain in the Ka-band is about 4 to 6dB higher than for Ku-band antennas of the same size, helping to compensate for the increase in rain fades. 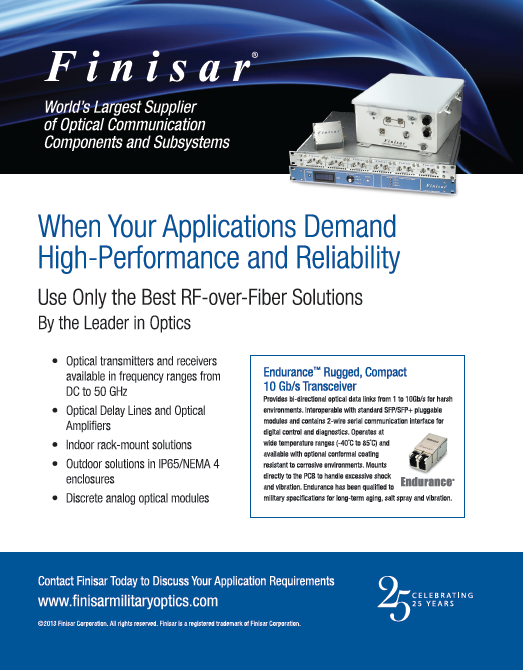 Please click the anywhere in the advertisement for: http://www.finisarmilitaryoptics.com/

Spot beam coverage is another effective technique. When used over wide-beam satellite coverage, it enables a higher concentration of power in a specific area on Earth in addition to supporting an increase in receive sensibility on the satellite. This ensures that terminal costs are reasonable while providing sufficient data throughput and appropriate service availability.

Gateway site diversity, or creating two gateway sites for the same application, is another popular technique. If one site is impacted by rain fade, the other site may not be and would therefore be the optimal choice. The location of the sites and distance between them can make this method more or less effective.

Strategic positioning of the satellite gateways can maximize or minimize rain fade. For example, a gateway located in a region that experiences heavy annual rainfall would be less ideal compared with a drier region, such as a desert.

For full transponder applications, automated level control (ALC) technology at the transponder automatically compensates for uplink rain fades to a certain level without requiring a major change in power from the uplink station. The uplink station only needs to provide enough power to the satellite to where the ALC operates within its dynamic range. In the case of heavy rain fades, an increase of power from the uplink station may be applied temporarily until such heavy rain fade has finished. Uplink power control as described in the following can be used for this purpose.

Shared transponder applications typically rely on the use of fixed transponder gain settings, requiring uplink stations to keep a constant input power at the transponder to achieve acceptable service availability.

Without technology intervention such as uplink power control, this can be extremely challenging. Uplink power control allows operators to increase transmission power automatically based on the presence of an uplink fade, making it a great tool for reducing rain fade in Ka-band services, like point-to-point links for data transmission (including Internet data) and TV contribution. (See Figure 2.)

Scalable video coding (SVC) is another technology that enables satellite operators to provide the best quality of service in the Ka-band. SVC allows operators to transmit compressed video in partial bit streams for higher and lower resolutions with lower and higher signal margin. During rain fade only the high resolution layers may be interrupted, allowing still ongoing video reception with only reduced video quality.

By enabling such type of graceful degradation in lossy Ka-band transmission environments, SVC helps satellite operators ensure they are still able to provide the best possible video quality also under adverse conditions and keep the overall service availability at a high level. The multistream feature of DVB-S2 allows an efficient separation of the different layers of SVC. SVC can also compensate for individual temporary high downlink fade and is by that specifically suited for broadcasting applications. (See Figure 3  below.)

Last, but far from being least, Adaptive Coding and Modulation (ACM) allows for the maintenance of link connectivity also under rain fade situations. Using ACM, operators can adapt the FEC and modulation of a satellite transmission to the end-to-end link quality. Some return information from the receive location is required to do so, which is a relatively easy task to be realized in two way systems.

ACM helps to compensate for disturbances in the satellite link due to physical conditions such as humidity and atmospheric precipitation by providing real-time adaptation of transmission parameters according to the link conditions. Supported by the DVB-S2 transmission standard, it can be applied efficiently for all point-to-point data transmissions, while data for several destinations can be merged within one multiplex. By reducing the data rate, ACM increases the protection level of the transmission under fade situations, making it ideal for applications like pure data services, which can tolerate a temporary slowdown in throughput or reduced response time. 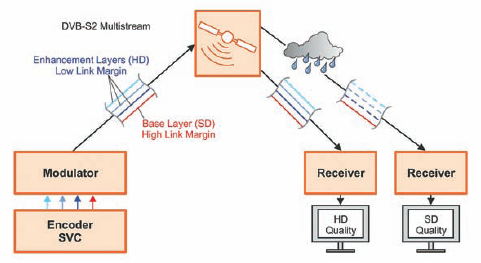 For pure real time services like voice and video with fixed data rate this may be less applicable. But for combined services with only a small portion of fixed rate real time services ACM is still well applicable. In this case, prioritization of these services over pure data services allows to keep the connectivity for these real time services to a big extend also in combination with ACM. Additionally, with some special hooks into the encoders used for voice and video, it is possible to reduce the data output in a coordinated way with the ACM operation, allowing a graceful degradation for these types of services under rain fade situations. (See Figure 4 on the next page.)

Ka-Band Applications
Many within the satellite industry originally viewed the Ka-band as being ideal for high-speed Internet and data services given its susceptibility to rain fade. However, using the advanced transmission and satellite technologies discussed above, satellite operators can easily mitigate rain fade issues, opening up the Ka-band spectrum to television services, including high-bandwidth services such as ultra high definition television (UHDTV).

With that being said, today Ka-band is primarily being used to support two-way professional or consumer data and Internet services in areas of the world that lack a strong terrestrial infrastructure such as DSL, cellular radio, or fiber. Through satellites operating in the Ka-band, which has a much higher available capacity than other satellite bands, people living in those regions can achieve a similar speed of service.

Given the amount of bandwidth that was recently freed up after the migration from analog to digital television, the Ku-band appears to have sufficient capacity to support Direct-To-Home (DTH) television applications for some time. However, a growing demand for HDTV and UHDTV may lead operators to look at the Ka-band as a viable resource for the supporting the increased bandwidth requirements of these advanced service 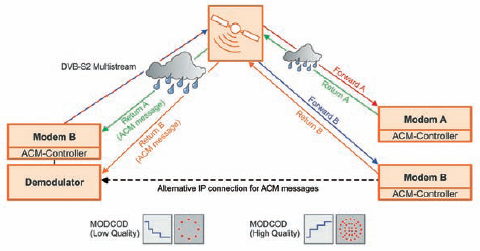 Conclusion
A number of Ka-band satellites or satellites having some Ka-band transponders on board are already in orbit. To capitalize on the capacity and bandwidth offered by the Ka-band spectrum, satellite operators may implement advanced technologies designed to reduce the effects of rain fade, and increase the service availability, while keeping the services cost-effective.

DVB-S2 modulators and modems that feature technologies like uplink power control, ACM and DVB-S2 multistream help satellite operators optimize the use of satellite capacity. With rain fade being a minor issue, operators can confidently roll out high-bandwidth digital satellite television and data services operating in the Ka-band. For further infomartin regarding the company, access their website at http://ww.work-microwave.de 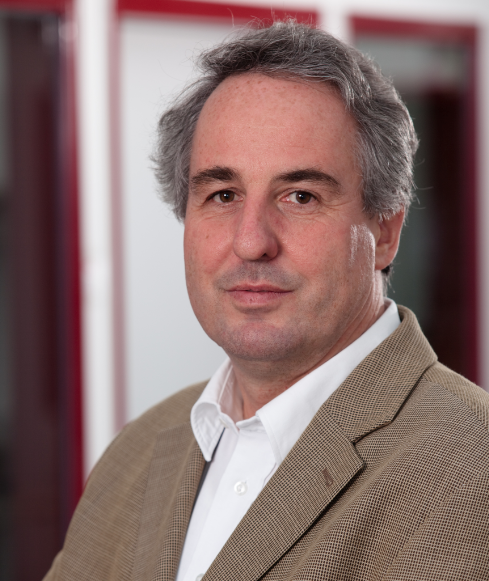 About the author
Since 2001, Dr. Mocker has been with WORK Microwave GmbH, in Holzkirchen, Germany, serving as the Director, SATCOM Technologies. From 2000 to 2001, he worked at Deutsche LANDTEL GmbH as that firm’s Head of Network Planning. From 189 to 2000, Dr. Mocker gained additional experience at  ANT Nachrichtentechnik GmbH as the System Engineer for satellite ground stations; at Bosch Telecom GmbH as the Technical Manager, Satellite Networks; at GE Capital Spacenet Services-Europe GmbH as the Manager of Engineering and Development, and at Gilat Europe GmbH as the Director Engineering. 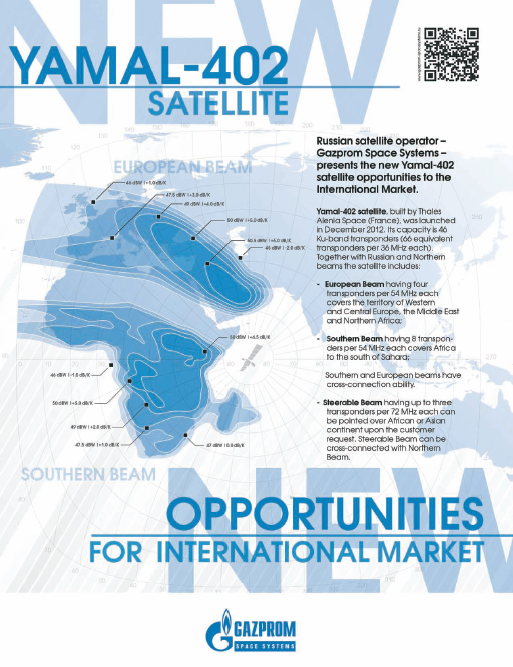