The University of Alabama in Huntsville's (UAH) Space Hardware Club’ s ChargerSat-1 is a fully operational, orbital satellite, ~1kg in weight and is a 10cm cube fitting to the CalPoly CubeSat standard. ChargerSat-1 is meant to demonstrate the full capabilities of all of the systems needed for satellite operations. The program involves members from 7+ UH departments exercising their skills in developing a satellite, ground station, and testing program.

ChargerSat-1 is the University of Alabama in Hunstville’s first entirely student built CubeSat. The ChargerSat-1 team applied for the third call for NASA’s proposal CubeSat Launch Initiative in the Fall of 2011. Acceptance to CLI was announced in February of 2012.

In November of 2012, the team was consulted for launch readiness and the satellite ultimately launched on the U.S. Air Force’s Operationally Responsive Space 3 (OORS-3) mission. 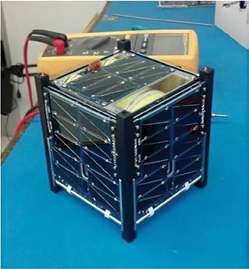 Mission Objectives for the satellite:

The program goals for the overall program:

Design, fabricate, and operate a satellite using the capacities of a multi-disciplinary team of engineering and scientific disciplines to develop a single integrated orbital system. UH hopes to inspire and engage the public in its missions and technical concepts.

ChargerSat 1.2 is the primary flight unit and is currently in orbit. This unit was built in the clean room and performed all required testing before its voyage to orbit.

ChargerSat 1.1 was also built in the cleanroom and is ready to intiate launch preparations. This satellite is used for risk-reduction, and has completed the heavy testing of the final design. ChargerSat 1.1 will be stored as a flight-ready unit and ready for launch, if needed.

ChargerSat 1.0 is the prototype satellite. This unit was built and flew as a microgravity experiment in August of 2012 through NASA’s Flight Opportunities Program. There have been some changes to the design since this prototype, mostly small corrections. 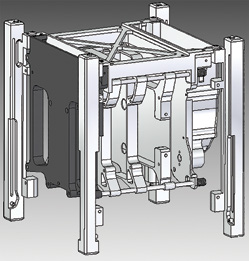 The ChargerSat-1 mechanical design, completely machined at UAH by the students in the Engineering Prototype and Design Facility.

ChargerSat-1’s demonstrations present a gravity gradient stabilization system for passive spacecraft stabilization; doubling the power input to the CubeSat via deployable solar panels; and using those same panels to shape the gain pattern of a nadir-facing monopole antenna. The latter will improve the horizon-to-horizon communications.

The team members include team leader Eric Becnel, who has been in this position since May of 2010, leading the team from concept to orbital operations of the satellite.

Matt Rodencal is the electrical lead and has been since the project’s inception in 2010, with most of his efforts involved in the development of the EPS, which consists of nine power point trackers, a power management system, and DC-DC converters.

Mason Manning is the software lead, also on the team since 2010. He designed and implemented most of the flight software and also assisted greatly with the electrical design and testing processes.

FYI, the university’s ChargerSat-2 project is now underway. The mission of this CubeSat will be to investigate the heat transfer properties of nucleate boiling in extreme gravity, investigating two key aspects: The effects of surface roughness and the effects of convection. Three student-design technologies are being developed that include the boiling instrument and an “aerodynamically” stablized drag device.

Editor’s note: Most of the preceeding ChargerSat-1 information is courtesy of the University of Alabama in Huntsville.