These applications demand a wide variety of products. Indoor rack-mounted amplifiers are typically installed in a climate controlled room or shelter located some distance from the antenna. Outdoor amplifiers (ODUs) and high power BUCs are typically mounted at the antenna in a hub, or on the actual antenna feed. Regardless of the type of amplifier or operating environment, customers always desire products that are smaller, lighter, more efficient, and reliable.

Ka-Band
The emergence of a-band is a key element in CPI’s business and the company has been at the forefront of the developing Ka-band HPA industry since introducing its first product in the 1980s. The company has been involved in a number of projects in various countries around the world that use Ka-band for both broadcast and IP applications. Today, CPI possesses the broadest and most established offering of Ka-band HPAs on the market. To address the crucial Ka-band market, CPI developed the following solutions...

More than 1,000 CPI Ka-band amplifiers have been installed and these amplifiers are relied upon in the gateways of most of the broadband, high throughput systems across the globe. 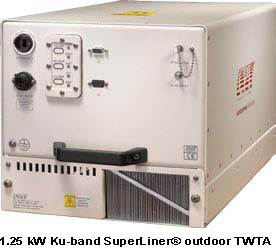 Reducing Environmental Impact
A significant step forward in TWTA technology was the creation of SuperLinear® TWTAs. These take the concept of peak power amplifiers to an entirely new level of efficiency. SuperLinear TWTAs first appeared about seven years ago and have gained considerable interest and market acceptance. In many applications where they are applied, these TWTAs are more than twice as efficient as GaAs based SSPAs. They are significantly more efficient than other types of HPAs (including GaN based SSPAs), SuperLinear TWTAs are now replacing both older TWTA and SSPA systems.

The SuperLinear TWTAs are designed for optimal operation at the backoff power levels that are required in order to meet standard international intermodulation specifications. This has resulted in a line of smaller, lighter, and cooler running HPAs.

Most traditional HPAs are designed to run from small signal to saturated power. However, the true usable RF power in a typical uplink application is limited by linearity requirements set by Intelsat and other satellite organizations. While RF power backoff of 3 to 7dB is all that is ever required, what is still required is the top-end peak power to avoid clipping of the transmitted signal. This clipping results in intermodulation products, spectral regrowth, and other non-linearities. Operating power must be limited to a maximum –3dB from the maximum peak power for low bit-error rates when transmitting signals like QPSK, QAM, CDMA, or OFDM.

When the TWT, linearizer, and HPA can be optimized to work best at the 3dB backoff point (half average power), such results in a more efficient amplifier at the true operating point. Internal TWT and amplifier temperatures are reduced, required amplifier prime power is minimized, and HPA size and weight are dramatically reduced.

Direct-To-Home (DTH) Television
While the DTH market in the U.S. and Western Europe is starting to mature, the demand for amplifiers for this market is flourishing in other parts of the world. CPI has provided amplifiers that are used in nearly all DTH systems around the world. These systems normally transmit to dedicated transponders and compress many TV channels on each transponder. DTH systems typically uplink at Ku- or DBS-band frequencies and the amplifier needs to provide sufficient linear RF power to overcome any potential atmospheric losses such as rain fade, which can be extreme at these frequencies.

CPI’s efficient and reliable GEN IV klystron power amplifiers (KPAs) are an ideal selection for many DTH service providers. The technological breakthrough for the GEN IV was the invention of the multi-stage depressed collector (MSDC) klystron in the late 1990s, developed by CPI SATCOM’s sister divisions: Microwave Power Products (MPP) and Communications & Medical Products (CMP). The MSDC klystron has demonstrated MTBF in excess of 200,000 hours.

Higher power TWTAs in Ku- and DBS-bands have also recently become available to the market. This provides some options for DTH service providers in certain areas of the world where atmospheric losses are not too severe. These TWTAs are available from CPI packaged as either indoor (IDU) or outdoor (ODU) amplifiers.

ODUs can be of particular interest to service providers as the amplifier can be located at the antenna or within the antenna hub itself. This reduces the RF losses between the amplifier and the antenna feed and permits the RF power required to be less than an amplifier located some distance away in a building.

There are always other issues to consider when deciding what type of amplifier technology to use. A service provider must balance ease of service, equipment reliability, and service availability in certain environments. Today, CPI offers TWTAs with RF power up to 1.25 kW SuperLinear in Ku-band and up to 750W in DBS-band.

Military
CPI supplies a complete range of ODUs and BUCs for commercial and government/military applications. The company is familiar with DISA and ARSTRAT certifications, and has many products certified to these requirements in the customer terminals product lines. Such products need to be rugged, reliable, and able to operate in a variety of scenarios that could find operating temperatures of up to 60 degrees Celsius. Together with the former Codan SATCOM products, CPI has shipped approximately 17,000 ODUs and BUCs to various locations and environments all over the world.