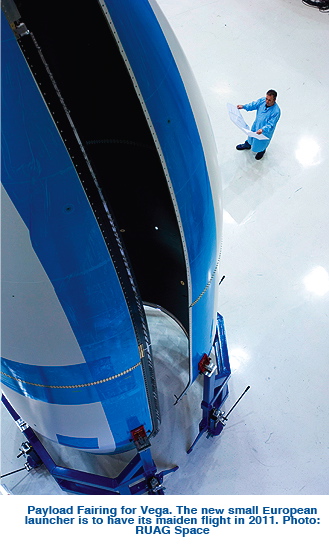 Just three and a half minutes, and it is all over — after 208 seconds in flight, the payload fairing of the Ariane 5 rocket is jettisoned. But in those few minutes — and during the run-up to the launch — a payload fairing has to prove its worth, so as to ensure that the valuable freight in the nose cone of the rocket makes it into orbit unharmed.

Satellites are highly sensitive, and the phase directly before and during the launch is fraught with perils – including extreme temperatures, solar radiation, dust, moisture, and rain on the launch pad – that could cause them damage. Then there is the deafening noise, and the enormous amount of frictional heat generated both during launch and while the rocket passes through the Earth’s atmosphere. Finally, there are the mechanical loads: as it hurtles through the atmosphere, the structure of the fairing is subjected to axial loads of up to 60 metric tons (600 kN) and lateral loads of up to 35 metric tons (350 kN) simultaneously. Throughout all this, the payload fairing must provide reliable protection for the satellite enclosed within it.

The engineers at RUAG Space in Zurich have more than 40 years experience in making sure that the rocket nose cone safely survives those all-important first three minutes. The Zurich headquarters of Europe’s foremost supplier to the aerospace industry is home to some of the world’s leading experts in payload fairings. Since the early days of the European Ariane program, Switzerland has been responsible for producing all of the nose cones for the western European launch vehicles.

The first payload fairing engineered and designed by RUAG Space was for the Ariane 1 launch vehicle, which made its successful debut on December 24th, 1979. Today, the engineers of RUAG Space can look back on some 200 successful launches, during which their payload fairings functioned with fabled Swiss precision. Not once in more than 30 years has a shroud from RUAG Space failed to protect the payload on board Europe’s Ariane, or the American Atlas V-500 rocket. RUAG Space is now one of the leading international suppliers of payload fairings using composite technology, which are deployed on both the Ariane 5 and Atlas V-500 launch vehicles. What is more, Vega, the new European small orbital launch vehicle premiering in 2011, will be equipped with a RUAG shroud, as well.

The fairing of a rocket must be as light as possible, and yet capable of withstanding the high loads that occur during launch. Striking a balance between these two contradictory requirements is one of the fundamental challenges designers of fairings have to face. The first use of composite technology in the fairings of the Ariane 4 rocket in 1988 represented a quantum leap in development. This new technology allowed the weight of the shroud to be reduced by around 20 percent compared with the aluminum fairings customary up until then. It also enabled engineers for the first time to develop an aerodynamically optimized fairing for the Ariane 5 and Atlas V-500 rockets in a double-curved form known as an ogive. The ogive-shaped fairing significantly reduces aerodynamic drag and increases the launcher’s payload capacity.

Today, a fully equipped composite fairing for the Ariane 5 launch vehicle weighs just 2.4 tons — at a length of 17 meters and a diameter of 5.4 meters. It is made up of 14 different elements, each of which consists of an aluminum honeycomb core covered with layers of carbon fiber reinforced plastic. 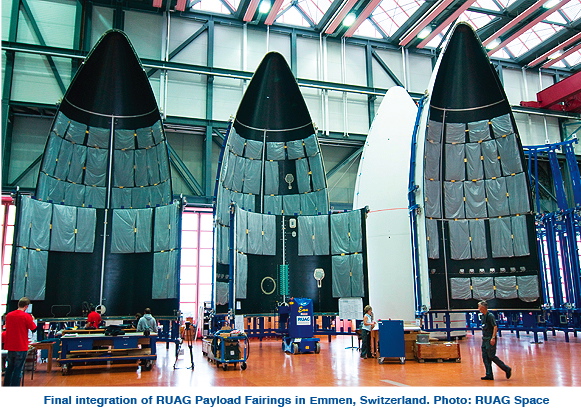 These fairing shell elements are manufactured at RUAG Space headquarters in Zurich. Their different layers (i.e., the inner face sheet of composite laminae, the honeycomb core, and the outer face sheet) are laid up on curing molds. The entire assembly is then processed in a large autoclave. After the curing process, the shell elements are outfitted with the necessary inserts and interface equipment for the bespoke mission. 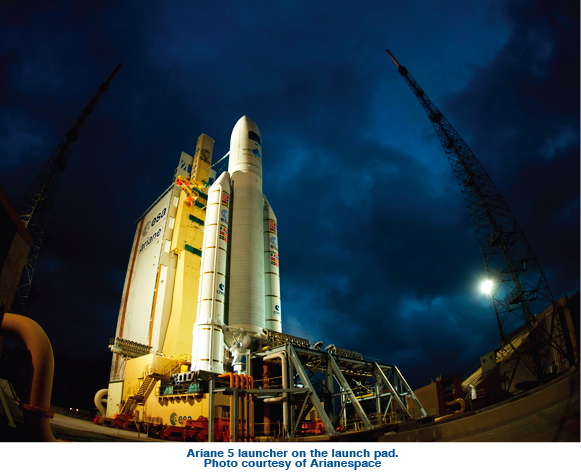 Once finished, the elements are transported to another RUAG site in Emmen, near Lucerne, for final assembly. Interfaces to the launcher, launch table mast and connections for on-ground payload cooling, separation systems, and electrical wiring are then installed. At Emmen, the fairing halves are painted with a special coating to prevent electrostatic charging, providing the necessary protection against solar radiation until launch. The two fairing halves are transported by either ship or cargo aircraft to the launch pad, where RUAG Space experts are responsible for assembling the fairing and readying it for the mission. 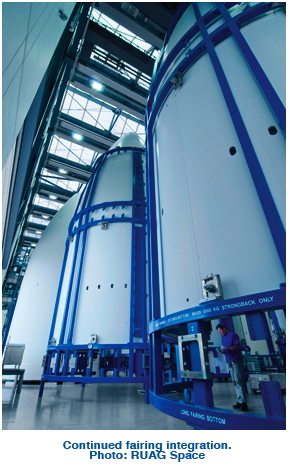 When the rocket ignites and lifts off, above all is the ear-splitting noise that poses a danger to the satellite. However, thanks to the effective sound-proofing system of the fairing and its acoustic design, the sound waves cannot propagate inside it — this reduces the noise to a level that poses no threat to the satellite. Depending on the fairing, the sound-proofing may be either an efficient acoustic resonator or a lightweight multi-layer porous absorber — both types are optimized in terms of acoustics, cleanliness, mass, and reliability. 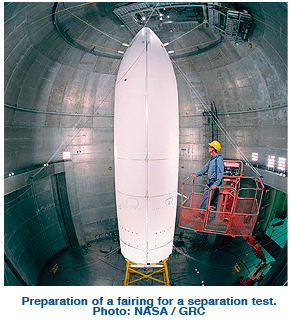 In flight, an Ariane 5 rocket reaches speeds in excess of 8,000 km/h. The atmospheric friction generated at this velocity heats up the rocket’s thin outer layer, and temperatures of up to 700 degrees Celsius are not uncommon. For this reason, the exterior of the fairing is covered with thermal insulating tiles based on natural cork. But a number of other measures provide protection against extreme temperatures, including special coatings, and ventilation ports to keep the payload cool when the rocket is on the launch pad. 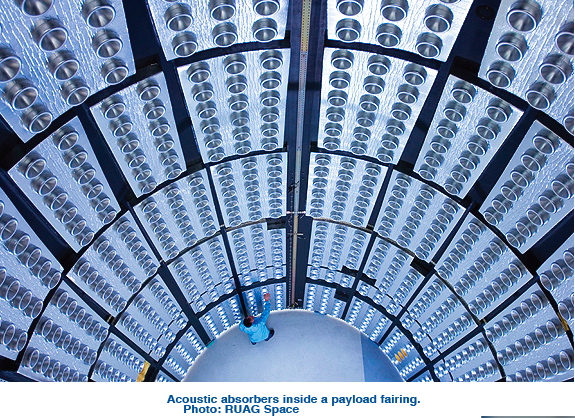 After about three minutes in the air, the fairing has reached the end of its lifecycle — the rocket has reached an altitude of about 120 km, and broken free of the earth’s atmosphere, so there is no longer any need for an aerodynamic form or any special protection for the satellite. Triggered by the onboard computer, the pyrotechnical elements of the separation systems are ignited, and the fairing halves are jettisoned, falling back to Earth.

It is this final moment of separation that poses a special challenge to the development engineers. The separation process must function reliably, and it must be possible to predict with accuracy the trajectory of the jettisoned fairings. On no account should a fairing come into contact with the fragile satellite. That is why the engineers at RUAG Space put their separation systems through such painstaking tests, often analyzing the separation behavior of the payload fairings in campaigns lasting several months. Such tests are carried out in the world’s biggest vacuum chamber at NASA’s Glenn Research Center at Plum Brook Station, Ohio. To make the grade, a newly developed fairing must pass a series of additional tests, including static load and acoustic tests. Later, during routine operations, the performance of every individual payload fairing is thoroughly assessed.

A comprehensive measurement system forms part of every RUAG fairing, ensuring that the dynamic environment of the satellite and the performance of the fairing can be accurately monitored.

Hendrik Thielemann studied Communications science at the University of Münster and graduated with an M.A. After completing practical training, he worked as newspaper editor. Since 2001, he has been working in the European Space Industry, holding various positions. Hendrik Thielemann has been the Head of Communications at RUAG Space since RUAG acquired Oerlikon Space in Summer 2009.
About RUAG Space

RUAG has become a major international technology group. The company today continues to operate from a strong domestic foundation to serve a growing global clientele. RUAG focuses on two market segments, Aerospace (space travel and aviation) and Defence (security and defence technology), each of which is involved in civilian and military applications in roughly equal portions. The headquarters is situated in Bern, Switzerland, and operates production centres in Switzerland, Germany, Austria, Sweden, Hungary and the United States. Its sole shareholder is the Swiss Confederation. 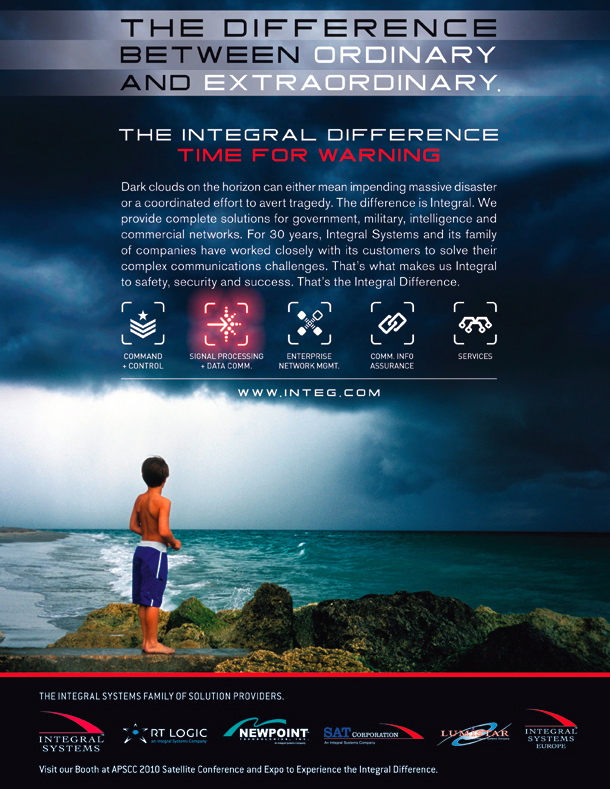