Working with space and ground-based groups around the world, they are now the largest space science department in Europe and have been involved in more than 150 missions in recent years. These have included the groundbreaking SOHO and STEREO solar missions, the Earth Remote-Sensing missions ERS-1, ERS-2 and ENVISAT, and solar system missions such as the Rosetta lander, the Cassini/Huygens mission to Saturn and its moon Titan. They also continue to work on MIRI (Mid-Infrared Instrument) for the James Webb Space Telescope (JWST).

RAL Space is part of the U.K.’s Science and Technology Facilities Council and there are approximately 200 staff who are dedicated to supporting the programs of the Council and those of the other research councils, as well as undertaking a large number of contracts for agencies, industry and other commercial customers.

The Company is based at the Rutherford Appleton Laboratory (RAL), located at Harwell, Oxford, and at the Chilbolton Observatory in Hampshire, U.K. Much of its work is done in collaboration with U.K. university research groups and a range of institutes around the world. Most of these collaborations have been set up to support the European Space Agency and NASA missions, although RAL is also working on projects with other countries and organizations that include Australia, Japan, Morocco, Pakistan, Russia and the European Union.

History
RAL was formed in 1979 from a combination of two existing laboratories that had been named after the physicists Ernest Rutherford and Edward Appleton, respectively. The Rutherford Laboratory grew out of the National Institute for Research in Nuclear Science (NIRNS). The NIRNS was formed in 1957 to operate the Rutherford High Energy Laboratory established next to the Atomic Energy Research Establishment on the former RAF Harwell airfield between Chilton and Harwell.

The James Webb Space Telescope (JWST) Project
JWS) is due to be launched in 2018 as the scientific successor to the venerable Hubble Space Telescope. The JWST’s ten-year mission is to find and study the first luminous objects, the assembly of galaxies, the birth of stars, the birth of planetary systems, and the origins of life.

JWST is a NASA project with international collaboration from the European Space Agency and the Canadian Space Agency and includes contributions from 15 nations. RAL Space’s main involvement has been the design qualification and acceptance testing of MIRI, a mid infra-red camera and imaging spectrometer developed in Europe, which will be one of the four main instruments carried by the JWST. 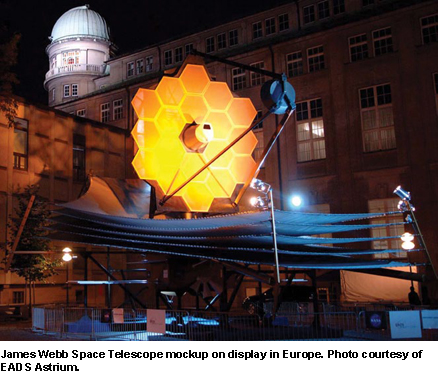 Unlike the Hubble Space Telescope, the JWST will not be in low-Earth orbit, but will be parked at the “semi-stable second Lagrange point”, or L2. This Earth–Sun L2 point is 1,500,000 kilometres (930,000 miles) from the Earth, or nearly four times farther than the Earth is from the Moon. At such a great distance, the Webb telescope will be considerably more difficult to service after launch than the Hubble telescope. From JWST’s point of view, the Sun will always be behind the Earth, reducing the harsh effects of solar radiation.

JWST might appear serene, but that fragile mass of technology must endure being stowed as the six ton payload of a launch vehicle. The satellite and its components (such as MIRI) must endure the noise and subsequent vibration of the ~145dB interaction between the rocket engines and launch-pad environment, the jarring transonic climb phase, pyroshock as stages separate, turbulent boundary layer excitation, and more.

Testing Regimes
The launch forces can induce fatigue in resilient metal structures—not to mention the sensitive electrical and optical components of instruments like MIRI. Consequently, the space industry has the most demanding requirements for vibration testing anywhere in the world. Given the fact that a damaged satellite cannot easily be repaired once it has been deployed, thorough testing is of fundamental importance before the violent ride into orbit. 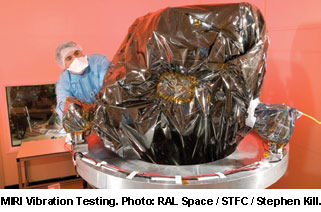 Protecting the multi-million euro investment in the JWST project, vibration testing establishes the make-or-break robustness of components, subsystems and ultimately the fully assembled craft. Depending on the stage of a project, different testing regimes are adopted.

To begin with, two identical versions of the test object are made, a structural model and a flight model. The first will never fly, but will instead be tested rigorously, and then the second—the flight model—will be tested just enough to qualify the assumption that it is equally resilient.

Design Qualification Tests
These are usually carried out on the structural model during the development phase in order to demonstrate that the design enables the equipment to withstand the vibration level it will see during launch, plus a qualification margin. In some cases they even test objects to complete destruction.

In the words of Senior Engineer Paul Eccleston, “You never actually learn anything about an object unless you break it. All you would know is that you are still within its safety margins. To find out where they are you have got to deliberately break things, so occasionally that is what we will do on development models. 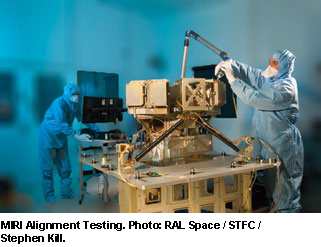 Acceptance Tests
These are performed on the flight model in order to verify workmanship and ensure that the equipment does indeed operate satisfactorily in its final configuration and will not degrade when subjected to the vibrations encountered during launch. Naturally, this is a critical test period.

According to Paul Eccleston, “When you are actually testing flight hardware—the stuff that is going to go up there—then it is a little nerve-wracking. Of course you have got high confidence that everything is going to be okay, but there is always that slight nervousness, in case it is not.”

Clearly, reliability of the test equipment is of paramount concern here, as causing a failure through accidental overloading of the test object is an unthinkable eventuality. This is balanced however with the high demand placed on the testing facilities, where time is of the essence. Fast setup and rigorous schedule adherence are highly important considerations.

Vibration Testing Systems @ RAL Space
In 2010, RAL Space decided to replace their existing LDS V954 Vibration System with a more powerful and flexible one to meet its increased testing needs. Their older V954 had served them well, but with increasing payload masses and more severe tests required, RAL Space needed to improve their capabilities. 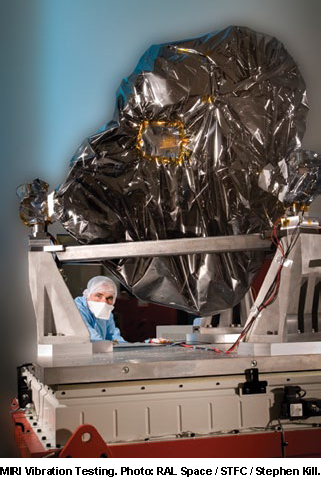 The new solution provides the increased capacity necessary for test programs going forward and is based on the LDS V8 electro-dynamic shaker, with the ability to operate in horizontal or vertical orientation. An integral slip table measuring 1200 x 1200mm is coupled to the shaker as necessary, allowing large objects to be mounted securely. The slip table has nine high-pressure hydrostatic bearings arranged on a 3 x 3 matrix. This configuration provides for maximum overturning restraint for devices under test with a high centre of gravity. They also have an additional, interchangeable 750 x 750mm slip plate for high acceleration testing.

The shaker cooling fan includes an all-weather acoustic enclosure that allows it to be located adjacent to the vibration laboratory, in order to separate the shaker cooling air from the ambient air in the laboratory. This is an important measure to maintain the integrity of the cleanroom environment and conditioned air. This is achieved with a sealed upper-air plenum and associated hoses to enable cooling air to be drawn from, and exhausted to, the atmosphere outside the laboratory. The PC used for vibration test control is loaded with a software-based remote control kit that can... 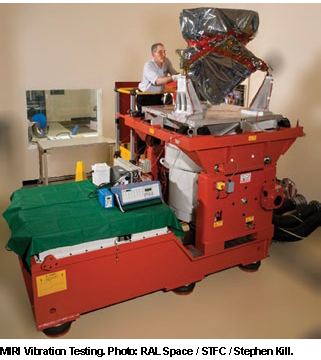 When specifying the guided load support platform, RAL Space had the MIRI in mind as well as an eye to testing larger, heavier structures in the future. This can be removed from the shaker and set aside when not required, and provides additional load support, and cross-axial and rotational restraint.

Brüel & Kjær supplied a set of bespoke fixture blocks to enable the MIRI to be attached to the vibration system without the need for complex and heavy attachment fixtures. This allows testing of the MIRI on its feet, using three mounts to keep it securely upright.

Of Critical Importance
Deciding to replace their LDS shaker with another, more modern one was certainly a vote of confidence for the brand, from a customer whose reliability concerns are among the most discerning in the world. With an extremely tight margin for error in their final product, and potentially disastrous consequences from the slightest testing problem, it is easy to see why such is critically important. Balancing time constraints and quality is always a dilemma, meaning right-the-first-time engineering is absolutely critical for RAL Space.