Satellite imagery, and the information derived from it, is playing a greater role in the management of exploration and production operations as oil and gas companies increase activities in remote regions of the world. 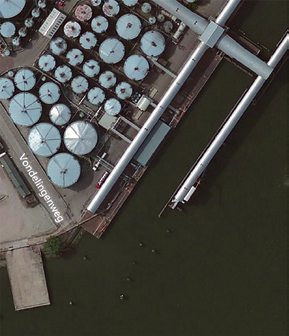 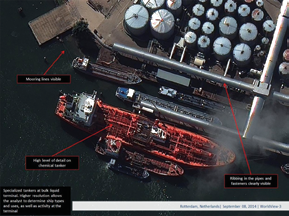 After the August launch of the company’s WorldView-3 satellite, DigitalGlobe imaged several examples of interest for the oil and gas (O&G) industry to demonstrate the increased uses cases  for satellite imagery as compared to traditional aerial methods. In this blog, DigitalGlobe highlights several benefits imagery and information can provide to the oil and gas industry.

Note: On August 21, 2014, DigitalGlobe formally notified the U.S. National Oceanic and Atmospheric Administration (NOAA) of WorldView-3’s Initial Operating Capability, which means that starting on February 21, 2015, the company will able to deliver 30cm imagery to all of their customers. In the meantime, DigitalGlobe is only able to show 40cm images from the satellite, which are not representative of the satellite’s full resolution capability.

Satellite Vs. Aerial
WorldView-3 satellite imagery, is highly competitive with aerial—in cost, availability and quick accessibility for the customer. In the two examples below, shown are the Rotterdam, Netherlands port facility and the associated oil storage facilities.

Above, left is the first image, a 40cm resolution satellite image—the image at the right is a 30cm aerial image over the same area. When the two images are compared, the 40cm satellite image shows similar level of visual information and detail as the aerial image. However, professionals in the oil and gas industry understand that acquiring new aerial imagery is costly, especially in remote regions. Moreover, with aerial imagery, you have the additional permitting, import procedures, logistics considerations, and delays to consider, which add expense and time to your project. 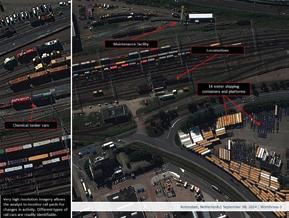 Additional advantages of this “Engineering Grade” WorldView-3 imagery are quite apparent where details of the small diameter pipes on the tanker are clearly visible. Ship types and uses can be clearly identified, as well as level and type of activity at the terminal. Imagine how such resolution will help in planning, executing, and monitoring exploration and production throughout the oil/gas field cycle.

Forecasts + Trend Spotting
Decision makers who have access to accurate and frequently refreshed business intelligence data used to drive forecasts and trends have a leg up over their competition. Specific to the O&G industry, as more and more oil is being moved by rail, there is increased interest in learning...

• What type of material is being moved through rail yards?
• How congested are they?
• Is the volume of cars this week, higher or lower than last week?

The type and the number of rail cars that are at a plant provide important capacity and capability indicators, which are valuable to future markets as well as other economic impacts. The high resolution imagery from WorldView-3 allows for this type of identification (see the image at the top of the next page). 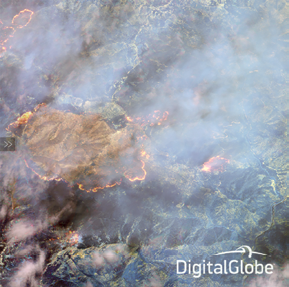 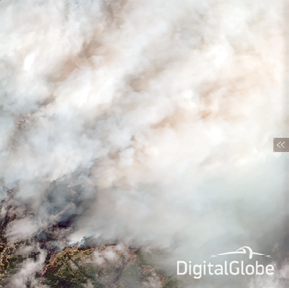 Seeing Through The Smoke
Fires can occur anywhere—however, in the O&G industry, they can be especially crippling. SWIR (Short Wave Infrared) is an advantage of WorldView-3 satellite imagery because it can see beyond what human vision is able to detect. The following two images (left, non-SWIR; right, using SWIR) are an example from the devastating Happy Camp forest fires that recently occurred in California. The value of having a clear picture through the use of SWIR is plainly revealed in the second image as to what is actually happening on the ground during an oil refinery fire.

Full Coverage + Quick Access
WorldView-3 imagery is available over any location in the world, as shown in this next detailed example on an oil facility island in the Caspian Sea. In fact, WorldView-3 and the five other high resolution satellites that DigitalGlobe owns and operates each orbit the Earth 15 times per day. WorldView-3, specifically, has an average revisit time of less than one day and is capable of collecting up to 680,000 km2 per day, further enhancing the DigitalGlobe capacity for more rapid and reliable imaging over an area of interest.

With WorldView-3 40cm imagery available today, and 30cm imagery available in February of 2015, decision makers in the O&G industries have new options to consider for their critical monitoring needs. As humans expand the areas for new sources of energy, to include those in remote regions, having the ability to image sites from space can help DigitalGlobe customers save lives, resources and time.

To learn more about our DigitalGlobe Energy Suite, email customersupport@spatialenergy.com

Editor’s note
Our thanks to DigitalGlobe for their permission to republish this article from their blog at their infosite: http://www.digitalglobe.com/ 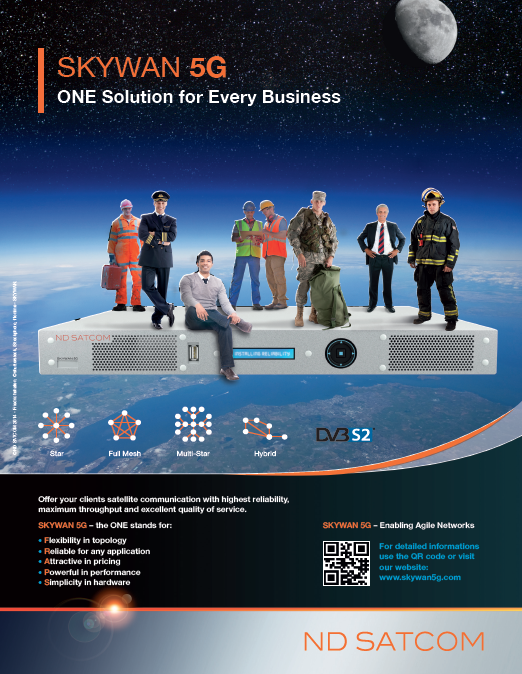