All services sharing the common carrier (TV channels, radio channels, VoIP services, data channels and so on), are multiplexed into a common high data rate stream which is transferred through the communications channel and separated at a receive site based on their packet identifiers in real-time.

The main advantage of this approach is the Single-carrier Transponder usage which allows using of the Satellite Transponders close to their saturation point (instead of 4 to 5dB output back-off in multicarrier mode). This way of using them allows for much smaller receiving antenna dishes (40 to 80cm in Ku-band systems), improved system margins and link availability figures, resulting in better quality of all of the services.

Even by significantly improved satellite transponder parameters, the requirements to ground station HPAs have increased rapidly in the last few years—even the highest power SSPA units (up to 500W Ku-band SSPA single units) appear to not be equal to the task of meeting large teleport requirements.

One the most important factors by Earth station design considerations is the required EIRP of the Earth station, which is calculated by a simple formula: 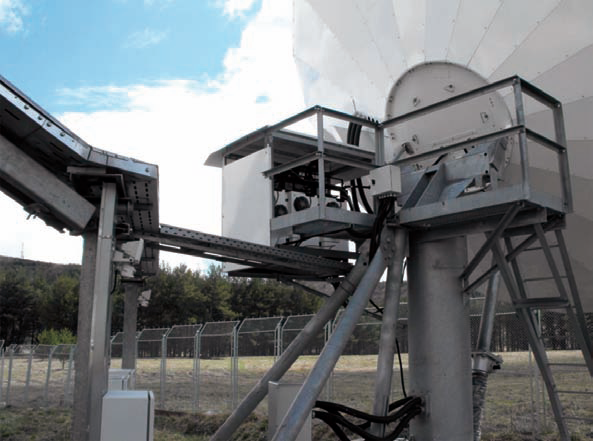 In order to increase the Earth station EIRP, the system designer should try to minimize the FL as much as possible. Especially in Ku-band, where the losses in the waveguide are about 0.16dB/m to 10m of waveguide path between HPA and antenna are already 1.6dB less EIRP.

The example above shows how important (especially in Ku-band systems) it is to minimize the feed loss. Strongly recommended is to install the HPA as close as possible to the antenna input. That is why outdoor systems, which minimize the feed loss, are much more suitable for high power Ku-band applications.

A few practical examples include:

1. 900W phase combined redundant system ( 3 x 500W SSPAs GaN operating in configuration 1: 1+1) was installed less than 3m away     from the antenna input—the measured feed loss was below 0.4dB for the installation as shown in Pictures 1 and 2 on this page.

The considerable reduction in size, weight, and energy consumption achieved when using GaN technology as opposed to any previous solid state technology, makes this new architecture the only viable solution today. 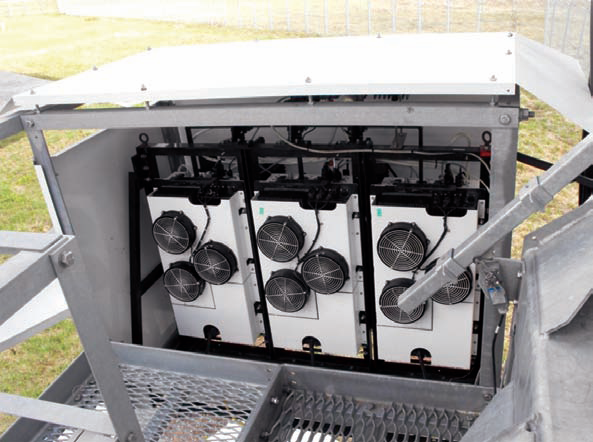 In the case of indoor equipment (installed in a shelter), a 1300W minimum HPA would be required to achieve the same EIRP—in this case, a 900W outdoor system is equivalent to a 1300W indoor system (both systems deliver identical Earth station EIRP).

2. 1600W phase combined system (8 x 250W Ku-band GaN SSPAs) was installed in the same way on a special mobile platform just behind the 13m antenna input. Feed losses reported were below 0.5dB. Similar indoor systems installed in a weatherized container under a 13m antenna will have at least 1dB more feed loss.

3.    2400W phase combined systems (8 x 400W Ku-band GaN based SSPAs) were installed on the same mobile platform behind the main reflector of a 13m Ku-band antenna. When operating 2 x 2400W Ku-band, one unit per each polarization, all transponders of an existing satellite were saturated, taking maximum advantage of bandwidth and power. Prior to the GaN technology introduction, this never was possible with any of the existing SSPA or HPA technologies.

Another serious disadvantage of the indoor systems is the need of a powerful and sophisticated air-conditioner system to extract the generated heat out of the shelter. This affects the whole system’s reliability and power consumption/efficiency.

In all Redundant systems (1:1,1:2), one of the HPAs is always operating on a dummy load. That means that half of the installed RF power is not really used, it is there simply to provide redundancy in case of unit failure. This leads to a twice lower efficiency of the system and a real waste of produced RF power. Additionally, the losses in equipment and maintenance cost will be significant.

Another serious disadvantage of these systems is the switching time of the W/G switches (about 0.2s), which will cause a significant amount of information to be lost in the payload data streams and, quite probably, loss of synchronization at the system’s receive site due to each redundancy engaging in a switching event.

Via the newly developed Advantech Wireless GaN based SUMMIT technology, the High Power SSPA consists of as many as 16 SSPA modules operating in a phase combined system, where all units in the system are constantly delivering their output power to the antenna. There is no waste of installed RF power in the system, which results in much higher system efficiency. The system does not contain any W/G switch, so there is no service interruption by unit failure event. An example of a High Power Phase combined system is shown in Figure 1 below. 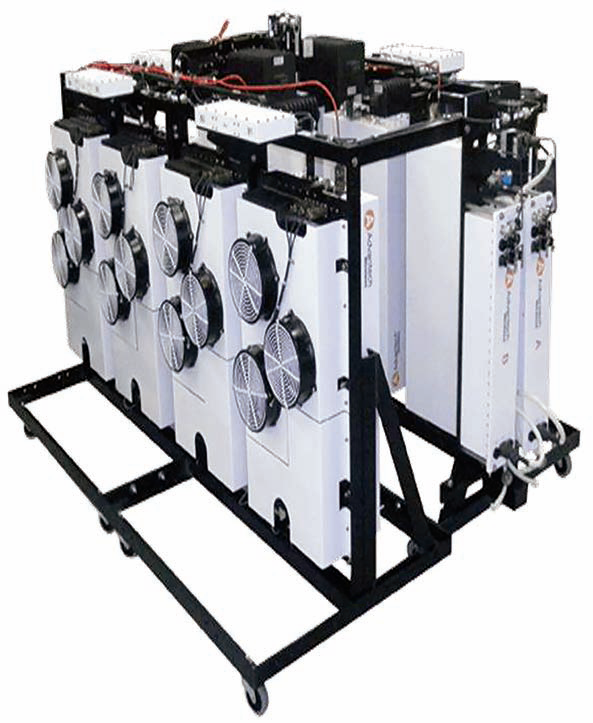 The system consists of 8 x 400W SSPAs delivering 2400W on the output. The system is equipped with 1:1 redundant up converters in order to have a convenient L-band input. Some of the main system characteristics are:

All modules are factory pre-set to equal gain and phase characteristics, and the system allows hot-swappable unit replacement without any tuning and adjustments procedures required.

By unit failure—the maximum output level degradation is 1.2dB, which can be automatically compensated by increasing the input level of the system by system controller (adjusting the up converter output level). The 1.2dB short term drop is actually within the system margin and should not affect communication system performance.

GaN-Based SSPAs And Phase Combined Systems
The latest achievements in SSPA technology implemented by Advantech Wireless are through the use of the highest efficiency GaN FETs-like output stage of the SSPAs. This leads to the most compact SSPA units and allows Advantech Phase combined systems to deliver the highest possible output power level on the market today.

For example, we can analyze a similar system such as the one shown in Figure 1 using 8 x 400W GaN based SSPAs. Some of the major system characteristics are:

A similar system in X- and C-band will achieve 6.6 KW total RF power. As of this writing, SSPA, TWTA, or Klystron HPAs can not meet the specifications as listed above. The power levels specified are close to the practical and theoretical limits for antenna feed capabilities and the system offers the maximum usable HPA power in Ku-band SATCOM systems.

If higher linear power is required, a multiple antenna solution would be recommended—splitting the payload to two or more antennas depends on the system’s requirements.

As a comparison, the maximum available TWTA (1250W) on the market, as of this writing, can not deliver more then half of the proceedings specified above linear power—the limit for this tube is 470W max at -25dbc IMD level by using a linearizer.

Note: The output power of this amplifier is limited up to 500W maximum, even if it is designated 1250W (which is actually the power of the tube itself, not the power on the output flange of the amplifier).

Klystron HPAs are usable in very narrow frequency bands (72MHz). In order to cover the full band—13.75 to 14.5Ghz—multiple Klystrons must be combined through the use of a very complicated frequency dependent upon combining circuits, which makes such a solution without much practical usage. The linearity performance of these amplifiers is also poor, so special linearizers should be used for each particular tube.

Phase linearity and group delay ripples are yet another problem presented by Klystron tubes. The performance under higher level modulation schemes (higher than QPSK) will also be limited—special group delay equalizers should be used.

GaN and GaAs based SSPAs and phase combined systems developed by Advantech Wireless are able to deliver the highest possible EIRP in SATCOM systems today. These EIRP values touch the theoretical and practical limitations that are established by waveguide components and the power handling capabilities of antenna feeds. 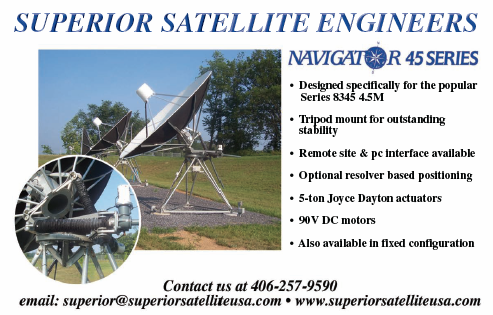