The space industry probably has the most demanding requirements of vibration testing anywhere in the world. Given the huge stresses involved in the launch of the payload, and the fact that you cannot easily repair a damaged system (satellite) once it has been deployed, it’s best that the system has been thoroughly tested before launch! 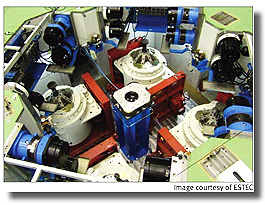 ESTEC (European Space Research and Technology Centre) has recently invested in a quad shaker system using LDS’ V984LS shakers, delivering forces up to a staggering 640 kN of sine force (each shaker is capable of delivering a maximum sine force of 160 kN/36000 lbf). The four shakers are mounted on a seismic block and connected to a head expander level with the floor. This will be used to test satellite solar arrays, large satellite communications antennas, and complete satellites from 400 kg up to 10,000 kg. These satellites will be launched using a variety of rockets, including Ariane 5 and SOYOUZ.

The vibration systems are used for a variety of tests. Alexandre Popovitch, head of Test Facilities and Test Methods at ESTEC, comments, “For large, light specimens, sine and random tests are usually performed at levels up to 20 g. This will require almost 100 percent of the QUAD system shaker capabilities. Complete satellites are only submitted to sine vibration at acceleration level close to 1 g. In certain cases, the whole satellite can be submitted to high acceleration level to simulate the static loads.” A test can take anything from one day to two weeks to set up, depending on the number of sensors to be mounted, with the actual test lasting a few minutes at a time.

The new quad system is a vital component in ensuring that ESTEC and the European Space Agency (ESA) maintain their position at the forefront of the space industry. “This new facility will save time in the critical path of the mechanical test campaign and, therefore, will reduce the testing price for our programme,” said Mr. Popovitch.

ESTEC is the technical heart of the ESA, and is located in Noordwijk in The Netherlands. The Agency manages nearly all the programs on space projects covering science missions, human spaceflight, telecom, satellite navigation, and Earth observation. The only exception is the actual launchers used to deliver the payloads into orbit, which are managed by Arianespace in France. Overall, more than 12,000 personnel in more than 100 European companies are involved in the preparation and launch of each space flight.

ESTEC’s test centre is home to about 60 personnel who cover all the fields required for qualification of space hardware for thermal, electrical, and mechanical environments. The mechanical facility is operated by six personnel who operate the vibration test systems, acoustic chamber, and mass properties’ measurements systems. This facility is the largest in Europe and one of the biggest in the world. 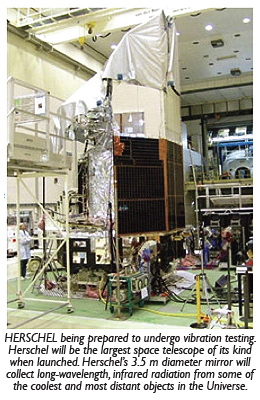 Paul Steel, LDS Project Manager for the vibration system, is justifiably proud of LDS’ contribution to the overall installation and the work he and his team have achieved. He describes this new system as “a showpiece for the industry.” “This has been a big project in partnership with other suppliers and we have all pulled together to see the project through to a successful conclusion,” he says.

This new quad-shaker system is in addition to an existing dual-V984LS system, which can be used in single-shaker mode (vertical or horizontal with a slip table) or in dual-mode with a custom made dual head expander. The slip plate for horizontal excitation measures 3.5 m long by 3.0 m wide. The dual system is fixed to a springmounted 550 tonne seismic mass to protect the building from forces generated.

The water-cooling is applied to the field coils and results in quieter operation and a cooler body temperature, minimizing the temperature effects on the equipment under test. This makes water-cooled shakers ideal for applications requiring high forces or large payloads tested for short durations. The absence of the air blowing around the shaker and test equipment makes water-cooled shakers particularly appealing in clean room environments, or when testing hazardous materials.

Acknowledgements
LDS would like to thank Alexandre Popovitch, Head of Test Facilities and Test Methods, ESA/ESTEC Test Centre Division, and Gaetan Piret, Technical officer in charge of the QUAD shakers procurement, for their contributions and permissions for this article.

About LDS
LDS Test and Measurement provides Product Validation Solutions for use in the aerospace, defence, automotive, machinery, electrical and electronics markets. Using our solutions at the design and test phase, customers can prove product integrity, improving the reliability, safety, durability and efficiency of products. With 230 employees, LDS is an international company with its headquarters in Royston, Hertfordshire, U.K., and research and development sites located around the world.