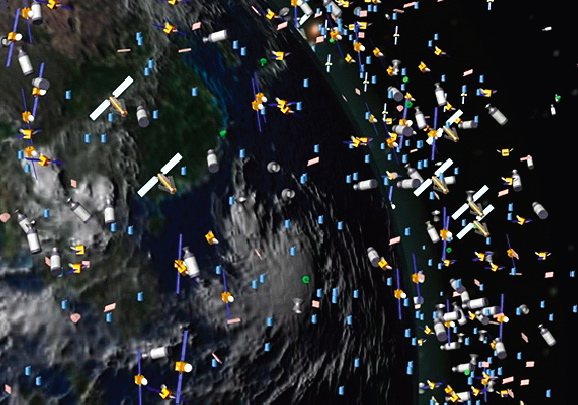 It all started as a hot topic around the lunch table at the ATK Spacecraft Systems and Advanced Technology Group in Pasadena, California, and resulted in a paper that was just recently presented at the 24th Annual Conference on Small Satellites sponsored by the American Institute of Aeronautics and Astronautics (AIAA) and Utah State University in Logan, Utah. Not the usual discussions on past weekends and latest upcoming vacations. Instead, a group of ATK scientists and engineers decided to tackle a troublesome international issue affecting spacecraft operators in low Earth orbits: orbital debris. 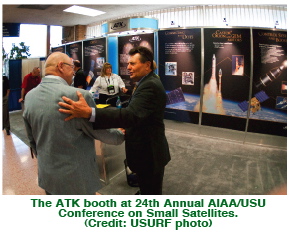 ATK recently participated in the American Institute of Aeronautics and Astronautics (AIAA) and Utah State University’s (USU) Small Satellite conference. As described on their website (http://www.smallsat.org/index), for more than 23 years, the AIAA/USU Conference on Small Satellites has been a forum for researchers and technology advocates from government, industry and academia to share new ideas and discuss the important topics of the day in small satellites.

In recent years, small satellites have proven their potential in scientific, commercial and military missions. The 24th Annual AIAA/USU Conference on Small Satellites focused on understanding future mission needs, within the context of small spacecraft system capabilities or limitations, striving to identify future technological advancements to make these programs successful.1

ATK attended this conference as one of 350 organizations, to combine for over 1,100 registrants from 20 different countries.1 This collective assembly provides a key opportunity to build industry partnerships that can address the existing commercial and government needs as well as anticipate future opportunities in the aerospace market. The conference included more than 60 presenters across a variety of small satellite discussion topics. 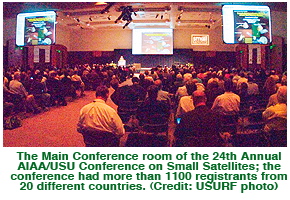 Orbital debris mitigation was one of two ATK papers accepted by the conference for presentation. The ATK paper was the only one to address what is a growing concern for the domestic and international space community. Written by Jose Guerrero, Jon Manash, Matt Russell, Doyle Towles (Spacecraft Systems & Services in Pasadena, California) and Steve Stone (Aerospace Structures in Laguna Hills, California), the paper was titled, How Can Small Satellites Be Used to Support Orbital Debris Removal Goals Instead of Increasing the Problem and was presented at the conference by Kevin McKee (Spacecraft Systems & Services).

Orbital Debris — Background
Orbital debris is any obsolete, man-made object in Earth orbit and it constitutes a serious concern for NASA, DARPA, Air Force organizations and the commercial space industry. These objects include spacecraft, upper stages of launch vehicles, any debris released during spacecraft launch separation or operations, created as a result of spacecraft explosions or collisions, solid rocket motor emissions, paint particles and thermal blankets.2 It is estimated there are 19,000 objects larger than 10 cm and 500,000 objects between 1 and 10 cm in diameter.2 The number of particles smaller than 1 cm probably exceeds tens of millions.2

The most concentrated area for orbital debris is in Low Earth Orbit (LEO). These are orbits with altitudes less than 2000 km with the highest concentration of <10cm diameter particles within an orbital band between 800 – 850 km. Larger (> 10 cm) orbital debris objects are routinely tracked by the U.S. Space Surveillance Network.2 Objects as small as ~3 cm can be detected by ground-based radars, providing a basis for a statistical estimate of their numbers.2 Assessments of the population of orbital debris smaller than 1 cm have been done by examining impact features on the surfaces of returned spacecraft, although this has been limited to spacecraft operating in altitudes below 600 km.2

The issue of orbital debris is not going away — it’s going to get worse unless corrective action is taken. Since 2005, the space debris environment has been unstable, with NASA projections pointing toward a collision cascade effect in the near future. A recent International Orbital Debris Removal Conference held in December of 2009 focused on the need to find solutions for orbital debris removal and manage any space debris increase potential.

Orbital debris continues to get increased scrutiny from the Defense Department, NASA, and the White House. The Joint Space Operations Center (JSPOC) operators now track 40 to 50 possible space collisions per day.3 JSPOC states that debris fields have grown rapidly in recent years, along with increases in satellite launches; these facts dramatically indicate the increased potential for space mayhem.3

The proposed ATK solution concept concentrates on mitigating LEO based debris particles ranging from 1cm to 10cm in diameter; precisely those particles that cannot be tracked by current ground systems capabilities, but can cause serious damage to spacecraft. The envisioned small spacecraft can be used in either of two modes...

Figure 3 shows objects in LEO that are being tracked — 95 percent of these objects are orbital debris.2 Even though the objects shown are not actual size, the image provides a clear message regarding the serious issue of orbit debris in LEO.

Defining The Problem + Trade Studies
The average impact speed of orbital debris with another space object is 10 km/sec.2 At this speed, 1 cm diameter objects and larger will cause loss of functionality or failure of a satellite due to impact damage.2 Nicholas Johnson, NASA’s chief scientist for orbital debris at the Johnson Space Center in Houston, was quoted in an August 2010 Space News article and commented, “Every spacecraft, whether manned or unmanned, is vulnerable to debris larger than 1 centimeter.”4

Certain debris objects less than 1 cm can also cause significant damage to spacecraft.2 Objects greater than 10 cm are tracked by the United States Space Surveillance Network (SSN) and, therefore, active spacecraft can maneuver around these objects because of their well-known orbits. However, objects less than 10 cm are too difficult to observe with ground based telescopes and radars and cannot be tracked or prevent spacecraft damage via defensive maneuvering operations.2

The ATK lunch group got down to business on the issue, conducted research, and evaluated various solutions for eliminating hazardous space debris. A trade study comprised of six different system concepts to minimize the problem was conducted. All the study concepts were rated and then ranked based on key performance criteria.

Four of these concepts used methods of heating the surface of the debris particles in order to induce ablation which would result in a thrust force that quicken the time to de-orbit the particles. Heating was accomplished by using either lasers (ground-, air- and space-based) or a solar concentrator. The fifth system involved using a deployed multi-layer sphere to capture and break up the debris. The sixth system used a large piece of aerogel with the intent to capture incident debris particles.

All trade study concepts were rated and ranked based on key evaluation figures of merit and ‘scored’. Scores were assigned to each using a point system, with 10 being best and 1 the worst. Each trade study Lead Engineer provided initial scores based on figure of merits for each design category. Then, each concept was evaluated and compared to the others and ranked by total score. 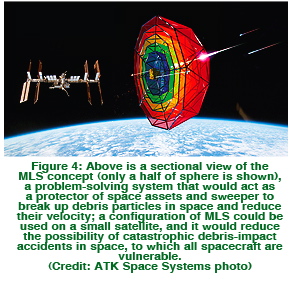 The highest ranking system was the multi-layer sphere (MLS) approach, which is based on the development of a spherical spacecraft enclosed in multiple layers of a lightweight material. This MLS spacecraft would act as a protector and sweeper, breaking up debris particles and reducing their velocity, kinetic energy and potential to induce impact damage. It was also noted that this concept was the only one of those investigated that could be implemented using a small satellite. 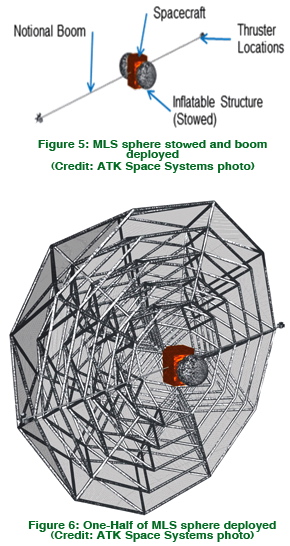 A small satellite can fit into the fairing of any of today’s launch vehicles and is defined as having a maximum total mass of 500 kg and up to 3 kW of power. The following is a more detailed description of the Multi-Layer Sphere and how it addresses hazardous space debris in Low Earth Orbit.

Multi-Layer Sphere (MLS) Concept
A lightweight, multi-layer material in the shape of a sphere, deployed in space (see Figure 4) can break-up large debris particles, creating particles to break up other particles, causing effective “Mass Fission” debris depletion. Some mass fraction of the incident particles are even expected to directly vaporize, depending on their mass, incident velocity, and material composition. The purpose of the MLS is to convert high velocity 1 to 10 cm debris particles into multiple, lower velocity shield-able (< 1cm) debris particles. The particles are broken up upon impact on the outer layer and then further destroyed when impacting subsequent material layers. The surviving particles are expected to be small enough such that the spacecraft can be effectively shielded to protect against damage. Figures 5 and 6 depict the net structure in its stowed and deployed configurations. Note that Figure 6 shows only half of the sphere deployed for clarity. 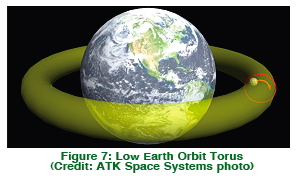 The spacecraft, in sweeper mode, should be maneuverable enough to sweep out a LEO torus volume over a specified orbit, as illustrated in Figure 5. It’s envisioned that several spacecraft could be operated over a few, pre-selected critical debris populated orbits to mitigate debris over a range of LEO altitudes.

The mission life is expected to be one to five years and will depend on the time it will take to sweep the maximum available debris particle field, the MLS spherical diameter, and available fuel. The maximum number of allowable impacts on the sphere is estimated to be 50,000 to 100,000. Therefore, it’s expected to require at least five (5) spacecraft to eliminate 500,000 medium sized debris particles.

This new technology clearly identifies the small satellite as a potent solution in the battle to fight space debris instead of being viewed as the cause behind the problem. The next step is to obtain funding to develop a working prototype that can be used as a space demonstrator. Hopefully, publicity will result in commercial or government funds to turn the idea into reality.

The ATK Team is proud that what started as a lunchtime discussion ended up in the form of a potential ground breaking technology that could assist in solving the orbital debris dilemma. As we all know, engineers love to work on a complex problem.

About the author
Chief Technologist within ATK’s Systems and Advanced Technologies Group (Spacecraft Division), Mr. Guerrero manages space program phases including, but not limited to, development, research, design, procurement, integration and test with 23 years of space flight hardware experience with expertise in systems engineering, space and advanced technology. He has over 12 years of Planetary Exploration hardware experience supporting JPL and NASA HQ programs and 11 years of Manned Space Flight Aerospace experience. Additionally, he has managed successfully over 50 ATK Space engineering multi-discipline tasks and supported over 60 space missions during service at Rockwell International.

Special thanks to Matt Russell and Kevin McKee from ATK Space Systems for their inputs to this article. 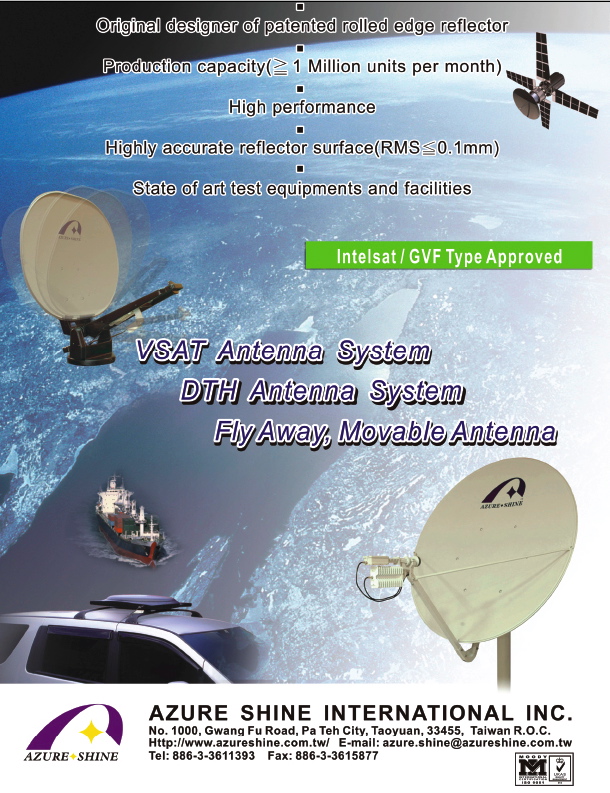