Eutelsat’s business plans for its upcoming Ka-Sat launch have been unveiled. Ka-Sat, currently in the last stages of construction at the EADS-Astrium facility in Toulouse, will be launched from Baikonur as part of an ILS/Proton mission this December to 9 degrees East, and Eutelsat plan to start commercialising the craft by April next year.

Ka-Sat is an impressive craft, weighing in at some 6.1 tonnes and based on the trusted and reliable EuroStar 3000 bus. It is also one of Astrium’s massive ‘three story’ craft and sat in Astrium’s clean room just a few meters away from YahSat 1, which has a quite similar mission (and a March 2011 launch), and Astra 1N which is still a few quarters away from launch. 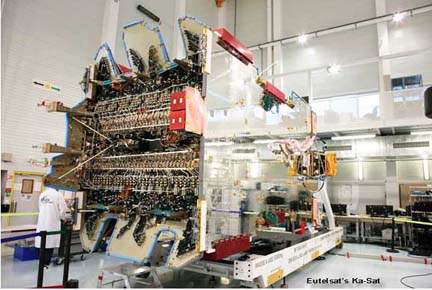 French research company iDate, in a presentation, stated that Europe’s demand for high-speed broadband bandwidth is “expected to explode”. iDate suggest that while conventional terrestrial resources will satisfy much of this demand, Europe’s need to bridge the digital divide will still leave many households either zero served, or under-served by any sort of broadband connection.
“It appears that broadband coverage by terrestrial networks (DSL and cable) is still limited in rural areas,” says iDate. “The level of a country’s terrestrial broadband coverage, the chief indicator of the competition environment, has a strong impact on the market opportunities for a satellite internet access solution. Western Europe is very well covered, with rates that often well exceed 97 percent.

“Although catching up, Eastern Europe still lags behind, but is catching up fast. As an example, DSL coverage in Poland moved from 64 percent (2008) to 83 percent (2009) of population. Meanwhile, North Africa is still characterized by a dire lack of fixed infrastructure. 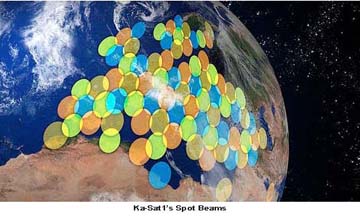 In 2009, only Egypt, Tunisia, and Libya were reporting coverage of over half the population while Morocco, at 20 percent, is the country with the lowest wireline network coverage.”

A final analysis by iDate says, “In 2009, iDate estimates 13 million HH in Europe and 16 million in North Africa remained not connected to terrestrial Broadband.” Incidentally, Ka-Sat’s spot beams, as well as covering the whole of greater Europe, also cover the major North African cities as well as having a dedicated beam looking at the Red Sea/Jeddah area of Saudi Arabia. 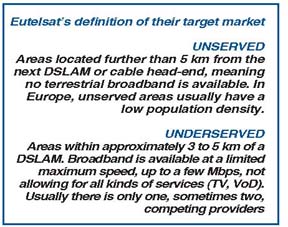 These 13m homes are Eutelsat’s initial primary market for Ka-Sat, although the number rises to a target audience of some 30m when North Africa-based prospects are included. iDate cites the success of similar satellite-supplied broadband in North America and Asia, and specifically mentioning the 925,000 active subs to either WildBlue or HughesNet in North America, and the 200,000 subs using IPStar over Asia.

Ka-Sat dramatically reduces the cost per Mb delivered by a factor of 8, says Eutelsat, compared with existing wide-area Ku and Ka-band supplies of capacity.
“Three to five times more expensive than ADSL offers in the early 2000s, broadband satellite services have long required a sizeable investment from residential users interested in this type of access, with some even preferring to opt for “unlimited PSTN,” says iDate.

“With the introduction of the Ka-band, prices have dramatically come down since then, as bandwidth costs are more than 8 times lower while number of supported users increases. Parallel to the decrease in the price of subscriptions, the price of satellite terminals has also dropped to reach 300 EUR in 2009 against 2000 EUR in 2003, thanks to technical improvements which have helped bring down production costs, and to the economies of scale generated by the tens of thousands of terminals sold by manufacturers,” adds iDate. 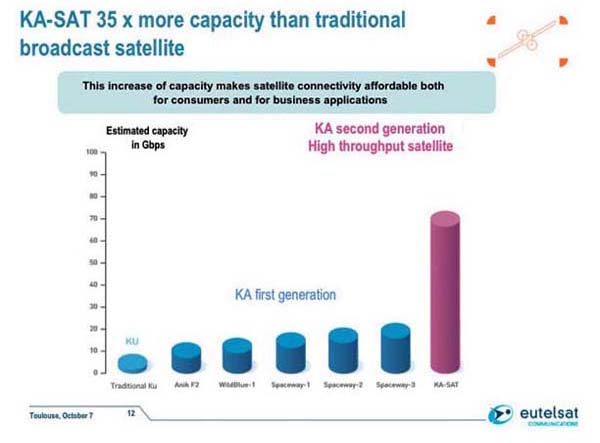 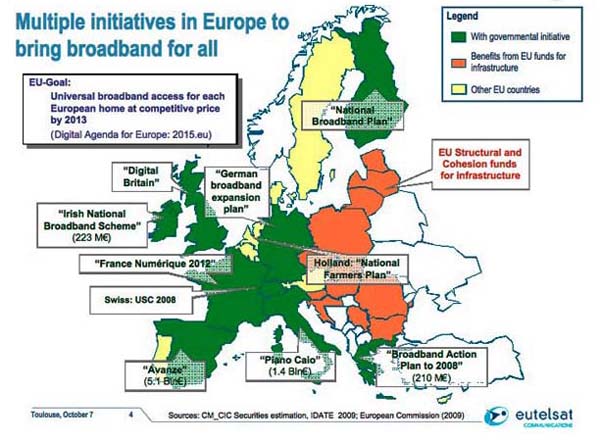 iDate specifically forecasts that the “first wave” of “massive subscribers” should occur in Europe and then North Africa from 2012 “when PC penetration rates will become sufficiently high”. By 2014, forecasts iDate, Europe and North Africa will top 600,000 and occupy more than 60 transponders (36MHz equivalent).

However, iDate’s bullish predictions go further, suggesting that there are “strong uncertainties” as to how rural regions of Europe will ever be served by any sort of “ultra broadband”. “Satellite technology is preparing the transition towards ultra broadband with projects aiming at reaching 50 to 100 Mbps from 2013. Eutelsat is already investigating ‘next generation’ High Throughput Satellites (HTS),” says iDate.

Eutelsat stresses that it will only wholesale its services, and will depend on a range of local re-sellers and equipment installers to deal directly with subscribers. Eutelsat say that likely wholesale fees for capacity to its Sat2Way/Tooway service will be about
€30 per month for a download speed of 3.6Mb/s (and an upload speed of 512 Kb/s) with a cap set at 2.4Gb max), or €60 for a 6 Gb cap. Eutelsat say that ViaSat-supplied SurfBeam 2 terminals will cost around €300, (and compares with €2000 back in 2003).


The satellite is but one part of the overall Ka-band commitment. Eutelsat’s Skylogic facility (SkyPark Teleport) outside Turin is the backbone hub of the system’s connectivity, which itself is linked to a comprehensive ‘ring main’ comprising 8 main gateways across Europe, plus a pair of back-up gateways, and a fully redundant fibre-optic ring backbone. 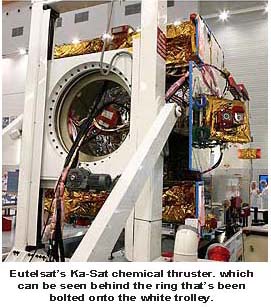 Jean-Francois Fremaux, Eutelsat’s business development director, says that the cost of rolling out FTTH becomes prohibitively expensive as one moves away from urban areas. Even suburban installations can cost €800 per home passed, and this charge rises dramatically as one tries to connect up rural (around €3000 per home) to isolated regions at a massive €7,000 per home — or more.

Mr. Fremaux reminded journalists that Eutelsat already has considerable success in generating very real revenues from data services — currently 19 percent of Eutelsat’s revenues (in the half year to December 31st 2009).

As to the prospects of turning these ambitions into hard cash Eutelsat is already on record with its thoughts: Eutelsat CFO Catherine Guillouard, speaking recently, said Ka-Sat is a sound investment. “We have had no red flags to show on this. We have [Ka-Sat service] distributors lined up in 30 nations. The decision was made in 2007 and it was a good strategy judging by the number of other companies that have followed since then. SES jumped in, Inmarsat jumped in. We are saying it will generate €100m in annual top-line revenue by 2013-2014. It is costing us €350m, to give you an idea of the return on deployed capital.” 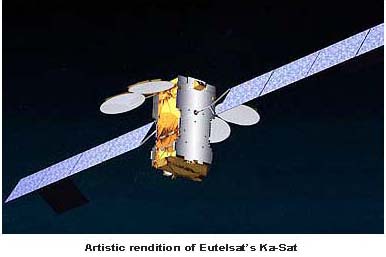 Of course, Eutelsat is not alone in terms of Ka-band. SES Astra is active with its Astra2Connect services, although takes a firm “step by step” approach to supplying extra capacity.

Then there’s Avanti Communications with its Hylas 1 satellite which is expected to launch aboard an Ariane 5 launch vehicle on November 26, 2010 (as of this writing), and again targeting Europe from its slot over the Atlantic. Avanti, despite modest revenue targets, currently has a market capitalisation in excess of £600m. Avanti is targeting 50,000 customers. 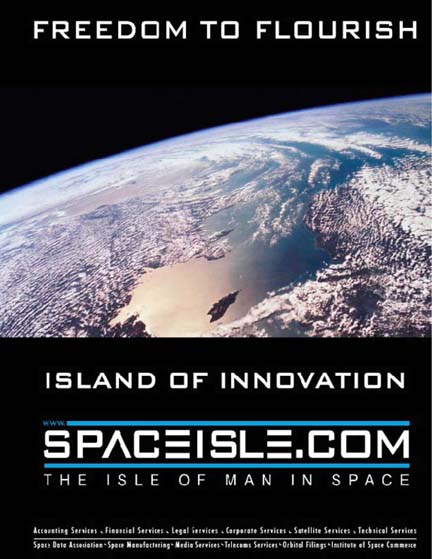