Since the company’s first contract in 1983, SEAKR has won, developed, and delivered hundreds of processing based subsystems for spacecraft payload applications leveraging Commercial-Off-the-Shelf (COTS) technology. Almost 300 company units have launched and properly performed or are currently performing their mission today. 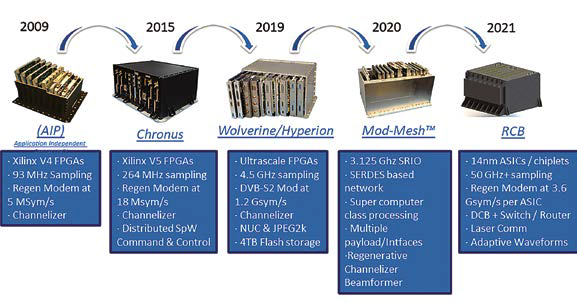 In the early 1990’,s SEAKR’s first flight systems were truly revolutionary and employed the commercial Motorola 68302 communication processor. At the time, this CPU was an enormous jump in performance over the leading rad hard MIL-STD-1750 CPU.

The success of this COTS processor led SEAKR to expand our portfolio to include the commercial Texas Instruments TMS320C40 CPUs for mission critical Digital Signal Processing (DSP) applications and a line of Power PC Single Board Computers including, the Motorola Power PC 603s, G4 and Freescale 8548. Needless to say, these COTS based processors crushed the standard issue rad hard CPU generations of their time period.

Jumping forward to the late 2000’s and state-of-the-practice today, some systems and applications are shown in Figure 1.

SEAKR’s architecture approach over the years intentionally evolved to achieve flexibility and adaptability. SEAKR’s Internet Router-In-Space (IRIS) launched the Application Independent Processor (AIP) architecture, and its implementation paved a milestone for coupling multiple Ku- and C-band transponders into a true layer-three-router. Quality of service, delay tolerant networking and other IP features were demonstrated.

As the name implies, the AIP processing system is highly adaptable to a wide range of On-Board Processing (OBP) applications such as image processing, data compression, communications processing, hyper-spectral processing, autonomous docking and high-speed switching. More than a half-dozen AIP based systems with vastly different missions and sensor types have been delivered and flown.

With this constellation, SEAKR now has over 900 SIRF V5 FPGAs and 225 MPC8548 PowerPC CPUs on-orbit.

With Cronus architecture as its foundation, the IridiumNext On-Board-Processor (OBP) is a reconfigurable processor providing all necessary hardware, DSP firmware and software for inter-satellite communication, L-band subscriber links and Ka-band gateway and feeder links.

Re-programmability was a critical enabler for Iridium as they deployed the NEXT constellation and orchestrated transition from legacy functionality to enhanced NEXT features, while retaining backward compatibility. 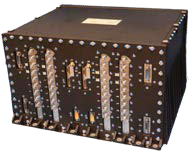 With the architecture fully reconfigurable, SEAKR adapted it to be an image processor called Hyperion (see Figure 4).

Combined with high-capacity data storage, the same architecture can be applied to on-orbit feature detection for indications, targeting and tracking against threats. The Hyperion system will be used on eight different imaging spacecraft for two different customers. 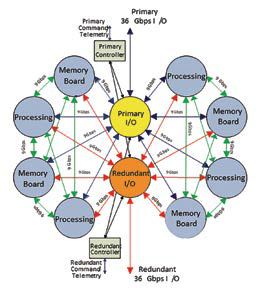 This network architecture can be and has been propagated throughout an entire spacecraft tying all payloads into one fully networked construct.

Over a half dozen spacecraft, and multiple customers have adapted this state-of-the-art network for their spacecraft central nervous system and data flow.

What Next? The Future is AI
With multi-hundreds, if not thousands, of satellites in proposed constellations, how does one control and operation such systems? And what if autonomous operation such as tip and queuing, fault isolation and autonomous spacecraft repair and/or replacements are required?

Artificial Intelligence and machine learning is key to achieving the full promise of evolving new constellations. This requires unique, on board processing that has never previously been flown. State-of-the-art 7nm electronics common in internet cloud computing centers and terrestrial edge computing will have to be used.

Toward this revolutionary processing capability for future constellations, SEAKR has recently been selected by DARPA to develop the Pit Boss processor for the BlackJack constellation. SEAKR will be bringing forward unprecedented autonomy and capabilities for this crucial USG program.

Scott Anderson is the President and Co-Founder of SEAKR Engineering, Inc.