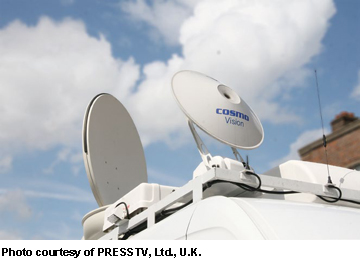 As IP video delivery becomes increasingly more common within the industry and H.264 encoders are more efficient, many broadcasters and content providers around the world are discovering that a hybrid IP-over-satellite approach to real-time newsgathering is the ideal method for preserving video fidelity while maximizing operational efficiencies. Delivering IP-based video over satellite has numerous advantages for news and sports applications, including increased flexibility, improved remote configuration and monitoring capabilities, reduced concatenation, and cost-effectiveness.

This article explores the benefits of using a hybrid IP/satellite approach to newsgathering, and utilizing advanced IP video encoding solutions. Included is a real-world case study of an IP-over-satellite application in a war zone.

Flexibility
Traditionally satellite links from trucks, fly-away systems, and remote locations are unidirectional; therefore, operators are unable to connect to computer networks without employing a separate network that can be expensive, possibly unreliable, or sometimes unavailable. IP links, on the other hand, are bidirectional. Supporting IP within a satellite setting gives operators the flexibility to move video content while allowing them to communicate with offsite personnel effectively, such as between onsite talent and an offsite producer. 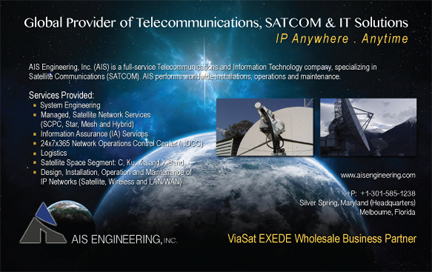 Using IP, operators can access email, voice, and Internet services via satellite in order to send and receive important messages about the project at hand using cost-effective low-bandwidth links. When high-value video/audio content needs to be moved, the system switches to a higher bandwidth configuration. This capability not only improves communication, but also optimizes remote configuration and operation in a balanced and cost-effective method.

Remote Configuration + Monitoring
Entering an IP address on a web browser or using a management system, operators at the studio can configure the settings of the remote equipment, such as encoders, and fix any issues that may affect viewers’ quality of service. These issues may include, but aren’t limited to, loss of video signal, impaired audio, adjustments to transmission power due to rain fade, bandwidth limitations, scheduling changes, etc. This makes it incredibly easy for engineers in the studio to access equipment at a remote location and troubleshoot to determine the root of the problem.

Many times, issues can be fixed remotely without the need for additional engineering personnel to be deployed. For example, if packets are being lost due to overloading of the circuit, a user could easily access the unit from any location around the world and reduce the transport streams aggregate data rate to fit the link bandwidth. This enables unmanned, middle-of-nowhere types of operations, such as news coverage in distant locations, to be managed more efficiently. 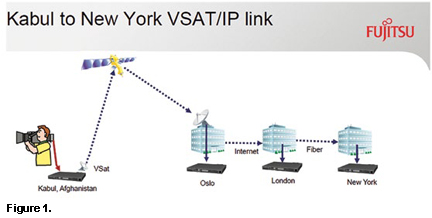 Reduced Concatenation
Reducing concatenation is critical for video operators. As few as four or five concatenated links can result in visual blurring of the color image to the point where picture fidelity and integrity of content can be severely compromised. For a news organization reporting from the field, content can pass through 10 or more concatenation cycles before it is delivered to network affiliates. This is a major issue that needs to be addressed by broadcasters and content providers relying on a traditional DVB satellite for video delivery.

By digitizing video content, either into a file-based format or real-time IP stream, video operators can ensure the highest end-to-end fidelity. Once content is in a digital format it can be stored, transported, decoded, etc., and the archive version avoids additional concatenation cycles. Therefore, supporting a hybrid IP/satellite approach to newsgathering helps broadcasters maintain the highest level of consumer video quality.

Cost-Effectiveness
In addition to the efficiencies a hybrid IP/satellite approach to newsgathering provides, such is also cost-effective, especially during major sporting events and other remote operations requiring longer than typical onsite operations. During these events, there are only bursts of activity when an operator needs to capture video. Using standard DVB satellite methods, an operator could pay for satellite time not used. The need to arrange other network connections for data and voice circuits also increase costs over the already high satellite costs.

Using IP-over-satellite systems and service packages from companies such as OnCall Communications, ND SatCom, and ViaSat, the remote team could have access to a narrow bandwidth IP network via satellite for email, data, and voice circuits at a reasonable monthly fixed cost. When a larger bandwidth connection is needed for high-value content, the system shifts to a per-minute cost. For example, rather than pay-per-minute for the entire duration of the event, operators only pay for the time when they’re actually streaming video. By providing broadcasters with increased efficiencies on bandwidth, a hybrid IP/satellite approach dramatically reduces operating expenses and adds features that would not normally be available in isolated areas.

Another advantage of using a hybrid IP/satellite approach is that IP-connected DSNG trucks can be managed remotely, enabling a video operator to keep a trained operator in the truck and higher-skilled engineers in the control room to manage multiple trucks. Additional cost-savings are realized by the operator in this situation because a fully trained engineer is not required in each truck/facility.

Real-World Case Study
A great example of a successful hybrid IP/satellite approach to newsgathering involves a leading U.S. broadcaster who needed to transmit news content from Kabul, Afghanistan, to New York. There was no easily available local solution for video, voice, data, and phone services. A standard satellite link was not cost-effective and was not safe, given the fact the territory was a war zone. To resolve these challenges, the broadcaster switched to an IP-over-satellite architecture using a VSAT that could be placed in a secure location and quickly moved if needed. (See Figure 1 on the previous page.)

Using Fujitsu’s IP-900 HD encoder and decoder, the broadcaster streamed live video and audio via IP over the satellite link to Oslo, Norway, at which point the signal travelled via the public Internet to London, and from London over fiber to New York where the decoder was located. This solution was more cost-effective as the broadcaster could access phone and data services on the same link, enabling them to work as if they were in the New York office. This also enabled Fujitsu’s support team to access the unit remotely in order to monitor and reconfigure the encoder as needed and limiting the number of people needed onsite in a dangerous region.

Key to the success of this link was Fujitsu’s robust error correction feature, which combines FEC and ARQ QoS techniques. Using a standard forward error correction (FEC) method, parity packets are created by the XOR calculation of payload packets. This type of FEC can recover randomly lost packets, but burst errors on the public Internet are more difficult to handle.

One of the most popular types of FEC is ProMPEG CoP3. ProMPEG CoP3 is an excellent FEC method; however, it cannot effectively recover packet losses when the packet loss ratio is very high. For example, in a scenario where there is 4 percent packet loss: ProMPEG CoP3 (10,10) => Packet Parity Ratio is 20 percent. The remaining PLR is 2E-4 (0.0002). If the bitrate is 8Mb/s, packet losses may occur every 7-8 seconds. Therefore, FEC adds to a video operator’s bandwidth requirements and ether requires more bandwidth at additional cost, or reduction in bandwidth used for video and audio data which reduces the end to end video fidelity. (See Figure 2 above for FEC diagram.)

In a conventional ARQ scheme, a decoder detects a lost packet and then sends NAK to the encoder. Upon receiving NAK, the encoder retransmits the lost packet to the decoder. ARQ provides better performance than FEC and can recover bursts of packet loss; however, ARQ will increase the end-to-end latency of the link and, if used carelessly, it can cause further network congestion, impacting upon other co-existing sessions such as TCP. (See Figure 3 for ARQ diagram.)

Fujitsu’s QoS solution is a hybrid FEC and ARQ approach that seamlessly and carefully blends FEC and ARQ methods. The end result is that the overhead bandwidth shared by FEC and ARQ remains constant and end-to-end latency is kept as low as possible. (See Figure 4.)

In normal operation, the decoder uses FEC to recover randomly lost packets. When there is a burst of packet lost and/or random lost is so high it overwhelms the FEC’s ability to recover, the decoder sends a NAK requesting lost packets be resent. When the encoder receives NAK, it resends the lost packet and simultaneously reduces the ratio of FEC packets relative to the increase of ARQ packets. This enables broadcasters and content providers to achieve a dramatic improvement in packet loss recovery, bandwidth utilization, and end-to-end latency compared with other QoS methods.

The Future of IP Satellite Newsgathering
IP networking and video delivery over IP are becoming more and more common nowadays thanks to the multiple benefits they offer, including increased flexibility. A hybrid approach that combines both IP and satellite gives broadcasters and content providers even more flexibility by enabling them to configure and manage video delivery systems effectively from remote locations or even support point-to-multipoint applications.

In addition to increasing flexibility and video quality, as well as reducing bandwidth requirements and costs, IP technology greatly decreases the complexity of the system required. For example, instead of needing a high-end routing system with massive amounts of bandwidth, broadcasters can use a more cost-effective system with reasonably priced bandwidth. Supporting point-to-multipoint communications, and eliminating the need to use IP terrestrial networks the entire time, operators are able to further reduce CAPEX and OPEX.

Given the recent introduction of Ka-band systems and release of the HEVC standard coupled with the continued demand for more satellite broadband, the hybrid IP and satellite newsgathering approach is expected to gain even more traction within the industry. Currently, ViaSat has an IP satellite in orbit, ViaSat-1, and is offering flyway systems and trucks supporting the Ka-band, and the military is also taking advantage of this spectrum.

As this equipment matures, HEVC becomes readily available and more IP satellites go into orbit, we will see an increase in IP video over satellite with smaller, portable, multifunctional system allowing us to do more with fewer resources, deployed personal, and bandwidth requirements.

About the author
Richard Harvey has more than 18 years of experience in the broadcast, satellite, and video distribution industry, including; the management of a Navy Broadcast Service (NBS) S.I.T.E. system onboard the USS Suribachi (AE-21); as sales manager of the Asia-Pacific Rim for a leading digital TV equipment manufacturer; and as the video product manager for another industry leader. Harvey has been involved with some of the industry’s digital milestones, including the Navy Broadcast Service’s digital satellite broadcast tests in 1991, ABC’s ATSC turn on, the first HD broadcast in Sydney, Australia and other notable accomplishments. Additionally, Harvey is a member of the Society of Motion Picture Television Engineers (SMPTE). 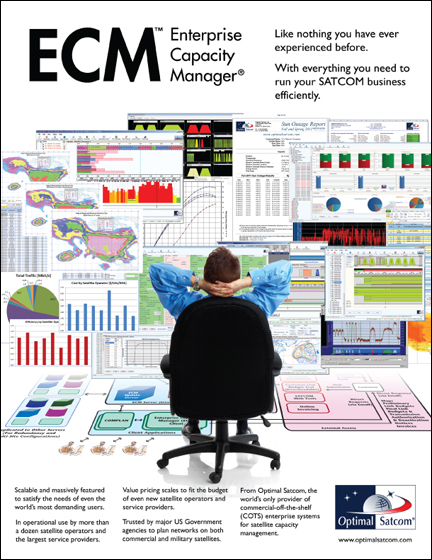