Martin Coleman started Colem as a satellite and broadcast engineering services and design consultancy. His next step was to create high quality Network Management Systems. At IBC, he announced a new company, Colem-Spice, formed by the union of Colem and Spice Design, long-term business partners. He was recently appointed Chairman of SUIRG’s Carrier ID Video committee.

SatMagazine (SM)
Martin, can you tell our readers why satellite interference is such a big problem for the Industry?

Martin Coleman
With a plethora of broadcasters and other organisations using satellites for all kinds of purposes, from global positioning to broadcasting satellite television, there is always going to be some crossover that will naturally cause interference. The television viewing experience will then be hampered, which of course, in the mind of the viewer, reflects badly on the broadcaster. Add to that the cost to find and rectify the problem is time consuming and expensive.

SM
What initiatives has SUIRG been spearheading to reduce satellite interference?

Martin Coleman
Our main focus over recent years has been Carrier ID. If all satellite users have an ID assigned to them, and pinpoint which satellites they will be using, errors in operation are reduced and interference can be avoided.

When interference does occur, it will be far easier to identify the source and, therefore, quicker to rectify, which will lead to less down-time for the broadcast affected. Three groups have been set up to deal with Video, Data, and VSAT.

SM
What technology and product innovations do you note that can help to reduce interference?

Martin Coleman
Taking a typical SNG vehicle as an example, Colem-Spice, through its work with many broadcasters and suppliers, has proven that operational errors are significantly reduced by automating the task carried out by the transmission equipment of that vehicle. Less mistakes lead to much more efficient operation and reduced interference. Add to this proper scheduling, an area within which Colem-Spice already has a great deal of experience, then planning of transmission services are simplified and conflicts avoided. 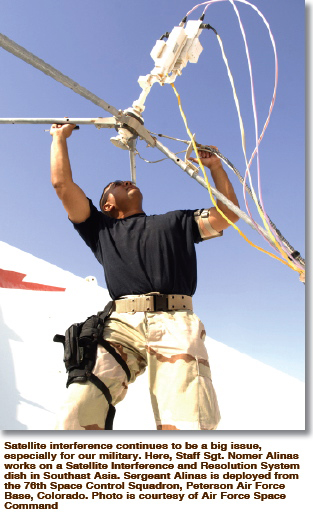 My belief is that any terminal should be able to self-monitor and take appropriate action to avoid dual illumination interference (a very common problem) and report this quickly and simply to operations personnel.

Colem-Spice is already working on exactly this scenario in its latest product range of automated SNG and FlyAway management systems. In addition, we are looking at bringing this automation forward to include the media itself, giving broadcasters more flexibility than has been possible in the past and with significant reduction in causing interference.

SM
What’s planned next for SUIRG?

Martin Coleman
Carrier ID is something we, at Colem, have been discussing and diligently working on for a number of years. I believe it is important to ensure roll-out as soon as possible.

We are there now, and it’s time to move onto new projects. I believe this will be the introduction of better automation and management of all transmission systems, with emphasis at the source. Already training initiatives have now been put into place and with Colem’s experience in the automation of SNG and FlyAway terminals, this is where the industry must focus.