The DragonSat-1 Project is Drexel University’s iteration of a CubeSat project and follows the established CubeSat standards, developed by California Polytechnic State University and Stanford University. 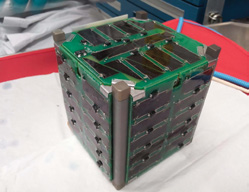 Photo of DragonSat is courtesy of the U.S. Naval Academy.

The satellite’s mission is to photograph the Earth from its orbit at roughly a 350km altitude. The focus will be on the northern and southern lights and to obeserve radiation dssipation intensity during such solar events.  In addition, this mission will serve as technology demonstration for many of the components and subsystems flown.

The payload of the DragonSat-1 will consist of a package of various sensors, including one (1) μCam camera, one (1) HMC2003 magnetometer, one (1) MMA7260QT accelerometer, and seven (7) LM335 temperature sensors.

The system will produce 640x480 pixel JPEG image files. These will be transmitted to the ground as well as various telemetry data that include temperature measurements, solar panel voltage readings, and accelerometer measurements.

There is 2GB of storage onboard the satellite in the form of an external SD card and DragonSat-1 is expected to have a lifetime of approximately six months.

Editor’s note: The preceeding DragonSat information and photographs are courtesy of Drexel and the U.S. Naval Academy infosites.