After more than a decade in Space, ESA’s Proba-1 (Project for On-Board Autonomy) began to show its age. 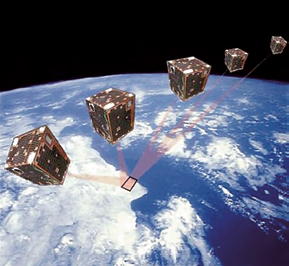 Originally designed for a two-year technology demonstration mission, the small satellite was launched on October 22nd, 2001, and is still providing images of our planet Earth.

Due to its extended lifetime, Proba-1’s orbit parameters have changed little by little, which, over time, has had a significant impact on the number and quality of the images taken. As Proba-1 is not equipped with thrusters, the satellite’s orbit could not be corrected. Another form of intervention was required. 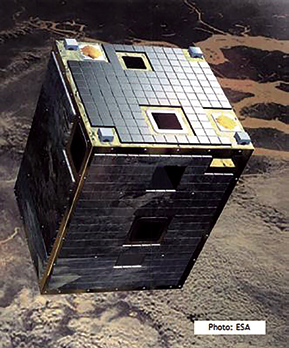 Artistic rendition of the Proba-1 satellite on orbit. Image courtesy of ESA.

This was an operation that proved to be successful and allowed Proba-1 to become fully operational once again and to increase the number of high-quality images destined for the scientific Earth Observation (EO) community. This timely intervention also revealed SPACEBEL’s ability to ensure proper maintenance of the software technology at all times.

Other examples of SPACEBEL contributions to satellite anomaly repair through software patch technology include saving ESA’s SMART probe propulsion system. SPACEBEL was in charge of developing the control software of SMART.

SMART-1 is the first European mission to the Moon. After having conducted unprecedented lunar orbit science operations, the 367kg. spacecraft ended successfully its mission through a lunar impact on September 3rd, 2006.

As part of an industrial team led by Swedish Space Corporation, SPACEBEL, was in charge of developing the control software. Time constraints on this program were absolute. Six months was the timeline for the development of the software, including the design, the production and the tests. 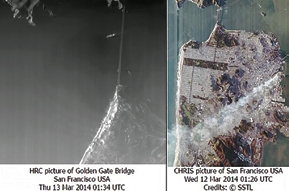 Proba-1 image captures of the Golden Gate Bridge and San Francisco in March of 2014. Photos courtesy of ESA.

This stringent requirement could only be met through the re-use of the data handling software that was previously developed by SPACEBEL for the PROBA-1 mission. The integration activities took place on the company’s in-house ERC32 target simulator and the validation on a hardware test bench. SPACEBEL also developed the application software, the hardware-software interface layer, including driver and communication services, and the boot loader. The AOCS software was generated from MATLAB models. It was integrated following an application shell/core paradigm and integrated on the on board computer simulation.

During its long journey, SMART-1’s electric propulsion suffered from radiations, which required a software patch to be downloaded directly to the probe.

Additionally, as a partner in the E = mc² operation (Entreprises = métiers.compétences²) conducted by the association Planète Métiers, which carries the Cité des Métiers label, SPACEBEL was awarded the 2014 label Operational Partner of the Liège Cité des Métiers. 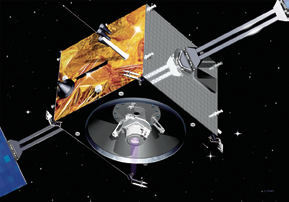 Artistic rendition of the SMART-1 satellite on orbit, powered by an ion propulsion engine.

A total of 50 companies in the Walloon region of Belgium have opened their doors to young people who range in age from 10 to 25 in order to help them discover trades of different kinds through active and structured visits to the firms. The objective is to promote better vocational guidance to all participants, ranging from sixth grade primary school pupils, to high school students, to tertiary students, as well as from job seekers, to those in search of career reorientation or retraining.

SPACEBEL has already hosted several events for these future actors of tomorrow’s economy in order for them to discover the world of business, all the while learning about SPACEBEL’s trade and the space sector and, hopefully, for becoming inspired to pursue technical education paths. 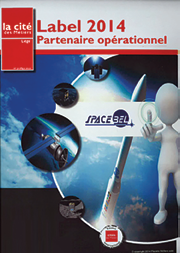 About SPACEBEL
By joining the European space programs in 1988, SPACEBEL decided to engage in demanding projects where mission critical solutions were needed, where performance and reliability were an absolute must, and where high added value ICT expert knowledge could be provided for the best results.

Such European space projects always contain a number of challenges, include technical necessities, cost analysis and risk mitigation. The company’s reputation for flexibility and reliability was built on an everyday effort to be responsive to the needs of customers, whether they are technical officers or program managers.

Together with significant and long standing expertise in flight and ground software engineering, these assets are offered to partners with our customers, where it’s all about building professional relationships on trust and on-time, viable deliverables.