The requirements of satellite communications can make APSK a more suitable modulation scheme than QPSK or QAM. 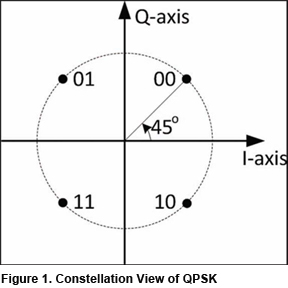 For any kind of modulated communication signal, a decision must be made as to how the data to be transmitted will be applied to the RF or microwave carrier.

One of the simplest of these schemes is Quaternary Phase Shift Keying (QPSK). In QPSK, the RF carrier is shifted between four different phases. Each of these four states can be used to represent 2 binary bits of information:

One way to recover these states from a signal is by using an I/Q demodulator, which splits the signal into an I component and a Q component (the values of the states relative to the I-axis and Q-axis respectively). For QPSK, there are two possible I values and two possible Q values. By detecting these values you can determine which state the signal is in at each clock period, and retrieve the bits assigned to that state. Retrieving these bits over many clock periods reconstructs the signal. 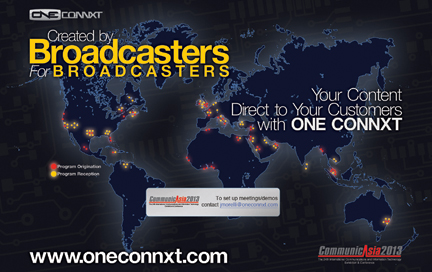 Another common scheme is Quadrature Amplitude Modulation (QAM). In QAM, the I and Q signals move back and forth within a finite set of discrete values. By linear combination of these I and Q values a larger constellation is achieved. If only two values of I and two values of Q are used you get something with four states that looks like QPSK. If four I and four Q values are used, you get 16 states (referred to as 16-QAM). Six I and six Q values can be used to produce 32-QAM:

The big advantage of QAM over QPSK is the amount of data that is carried per symbol. For 32-QAM each symbol represents five bits of information (25=32). As the bandwidth of the signal largely depends on the symbol rate, you can send 2.5 times as much data as QPSK in the same bandwidth. Many QAM schemes exist, with 1024-QAM being used in some applications.

Satellite Transmission and Distortion: In satellite transmission, the high-power TWT and solid-state power amplifiers used to transmit the signal are often used at or beyond their compression levels in order to maximize their conversion efficiency and get as much output power as possible given the limited power available on the satellite. Distortion from these amplifiers can “move” the states around on the constellation and make it difficult to determine which state the signal is in. Looking at the constellation diagram, the “inner” states (closer to the origin) are lower power states, and may not be distorted, while the “outer” states may drive the amplifier into compression and experience distortion. 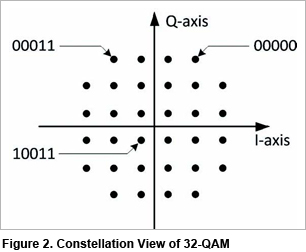 QPSK is a highly robust modulation scheme. The states are far apart, so even if the constellation is distorted during transmission, it is often still possible to retrieve the transmitted data. Although it is robust, QPSK does not send very much information (only 2 bits per symbol). QAM is much more efficient in the amount of information sent per unit bandwidth, but non-linearities in transmission can distort the positions of the states to the point where they are difficult to distinguish.

In Figure 3 above, we see the constellation diagrams of a 32-QAM signal, before and after passing through an amplifier operating in compression. As you can see in the diagrams, the compression pushes the outer symbol states of the constellation inward relative to the inner states. If we are able to clearly distinguish these states, then we will see very few errors. Coding techniques allow the signal to recover from errors, but only to a point; if the distortion gets large enough, the link breaks down.

APSK as a Solution: An ideal modulation scheme for satellite transmission would give better spectral efficiency (bits per symbol) than QPSK, but be more resistant to distortion than QAM. APSK (Amplitude Phase Shift Keying) can be a way to obtain the best of both worlds. In APSK, the symbol points are configured in concentric rings of constant amplitude (please see Figure 4).

Like QAM, APSK gives more bits per symbol than QPSK, allowing more data to be sent in the same bandwidth. But unlike QAM, the states are configured in rings, with the intent that symbol points in a given ring will react the same way to compression. This has two positive effects. The first is that compression of the signal tends to have less of an effect on the spacing between states (sometimes referred to as the “Euclidean distance”), and so the states are easier to distinguish from each other during demodulation. Figure 5 shows a 32-state APSK signal subjected to non-linear distortion. Note that the states maintain their spacing better than the 32-QAM example (please see Figure 5). 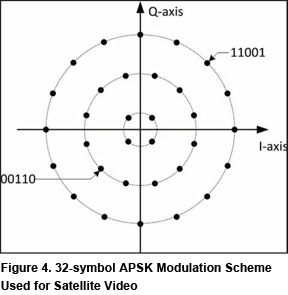 Peak to Average Power Ratio (PAPR): Another consideration is Peak-to-Average Power Ratio (PAPR). This metric gives the ratio of the highest power the amplifier will be expected to send to the average power. This ratio is important to designers because the amount of data that can be sent is proportional to the average power, but the size of the amplifier needed for a given format depends on the peak power. The ideal PAPR would be 1:1, and this is in fact the ratio for QPSK. All of the points in the constellation are the same distance from the origin, and therefore require the same power to transmit. For more complicated schemes, APSK has an advantage over QAM: the 32-APSK scheme shown above has a PAPR of approx. 1.57, compared to 1.7 for 32-QAM. By adjusting the spacing between rings and other factors, a designer can reach a balance between lower PAPR and better resistance to distortion.

Example—DVB-S2 Standard: An example where APSK is used for satellite transmission is the Digital Video Broadcast Satellite Second Generation standard (DVB-S2). The DVB standards were written to give the manufacturers of satellite video receivers a limited number of modulation and data configurations around which they could design interoperable boxes. The first generation standard (DVB-S) allowed for BPSK (Binary Phase Shift Keying) and QPSK modulation schemes. In the early 2000s, it became apparent that higher-quality video signals with more data (HDTV signals, broadcast-quality feeds, back-haul video, etc) would require to pack more data into the same bandwidth. To accommodate these higher data rates, the DVB-S2 standard added 8-PSK, 16-APSK and 32-APSK as allowed modulation schemes.

For test and measurement purposes, these signals can be generated using an RF source with a built-in I/Q modulator and arbitrary waveform generator (AWG), such as the Agilent N5182B. The AWG can be programmed to generate DVB-S2 and other signals by the Agilent N7623B Signal Studio for Digital Video software. Generating known test signals and applying them to the link facilitates measurements of link quality like EVM and BER.

Custom APSK Signals: A key to successful use of APSK is the configuration of the constellation. Although this configuration is fixed in standards like DVB-S2, engineers working outside of these standards can adjust for their particular link parameters by optimizing the number of states per ring, the distance between rings, and the phase positions of the states within the rings. With this optimization the system can be made more robust, and carry more data with less power. 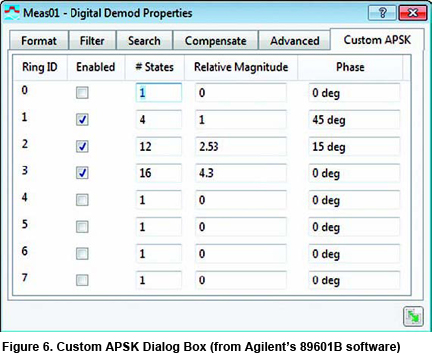 Assuming that the states in each ring are evenly spaced in phase, there are four fundamental parameters of the constellation which can be changed:

This customizable nature can make it a challenge to demodulate and evaluate APSK signals. Agilent’s 89601B Vector Signal Analysis software can be used to demodulate many different kinds of modulation schemes. For APSK signals, it supports measurement over a wide range of parameter settings.

This flexibility allows designers of satellite systems to experiment with new modulation schemes, and users to adapt to new standards as they come along.

Conclusion
As a modulation scheme, APSK can combine the best of the QPSK and QAM schemes to give more data per channel. By pre-distorting the channel, high-quality end-to-end transmission can be achieved. Flexible measurement tools accommodate measurements of pre-distorted and received signals and allow for real-world testing of custom configurations.

About the author
Donald joined Agilent Technologies in 2006. He is an application engineer supporting RF and Microwave products in the Southern California region. His focus is within the Aerospace and Defense industries with special emphasis in the latest trends in radar, electronic warfare, telemetry and military communications. Before joining Agilent, Donald worked in the broadcast and entertainment industries. 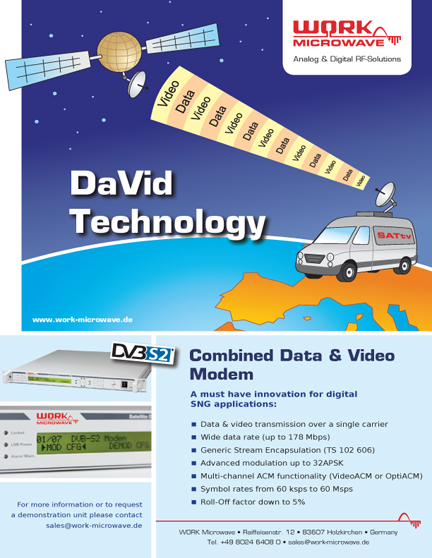 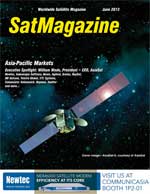