On November 19th, 2013, the NASA Wallops Flight Facility launched a Minotaur 1 rocket with 13 small satellites aboard, including one constructed by University of New Mexico (UNM) researchers and students. 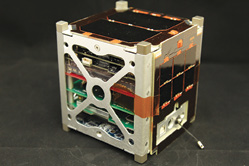 UNM’s Trailblazer satellite is now in orbit and is sending back information on gamma ray radiation in the ionosphere.

Trailblazer will provide a proof of concept to an Air Force sponsored technology called Space Plug and Play Architecture (SPA). The idea is to quickly build satellites for a range of missions, using off the shelf components.

Currently satellites use individually designed components, which must be individually tested and approved for the demanding environment they will encounter in space. That drives up cost exponentially. If Trailblazer works as envisioned, its internal, commercially available components will operate well in a hostile environment within which they are bombarded with gamma radiation and subjected to extreme heating and cooling cycles as the CubeSat orbits. 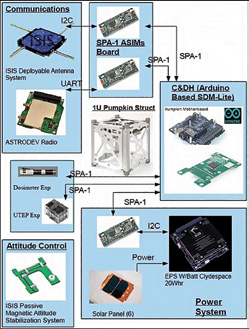 A schematic view of the SPA-1 Trailblazer’s various subsystems. Image is courtesy of COSMIAC.

“Development of this cubesat involved many students who worked on elements of the satellite and the sustained efforts of the research and development team at COSMIAC,” said UNM Distinguished Professor of Electrical and Computer Engineering and COSMIAC Director, Christos Christodoulou. “We are thrilled as we move into the next phase of our program.”

COSMIAC (Configurable Space Microsystems Innovations and Applications Center) built the Trailblazer. The craft has a mass of 1kg and uses Commercial Off The Shelf (COTS) components.

Trailblazer is providing radiation exposure measurements from a dosimeter designed by UNM’s Configurable Space Microsystems Innovations and Applications Center (COSMIAC) and the Air Force Research Laboratory. The satellite also carries a new additive manufacturing technology designed by researchers at the University of Texas at El Paso.

Editor’s note: The preceeding Trailblazer information and photographs are courtesy of author Karen Wentworth of the University of New Mexico.