The South African Space Industry is in need of a drastic shake-up otherwise the country will miss out on the Fourth Industrial Revolution now driving economies worldwide. 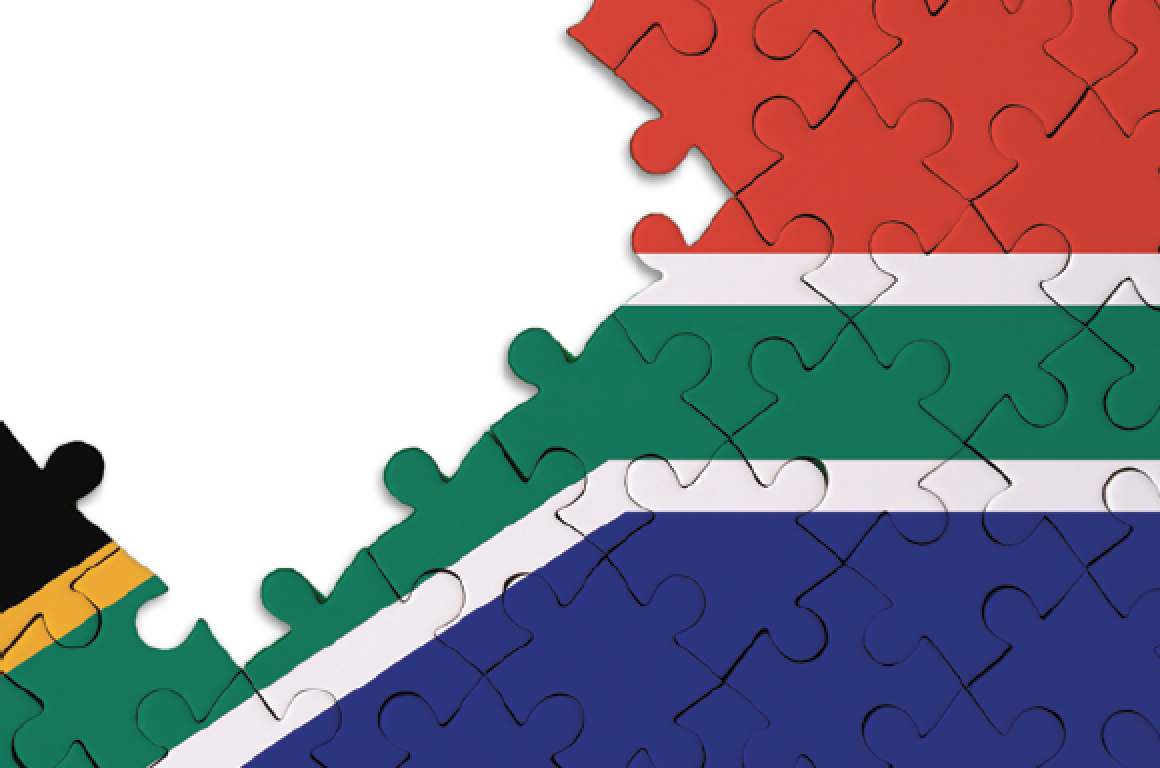 The cause could rest with the nation’s lack of funding and the fact the country’s space industry is not operating in a coordinated manner. This is the message that Department of Trade and Industry (DTI) and the South African Council of Space Affairs (SACSA) received loudly and clearly at an October workshop in Cape Town to test the space fraternity’s response to the organizations’ Space Industry Development Framework and draft Space Legislation.

However, it seems that SACSA — whose mandate is to advise the DTI on space legislation and related matters — was well aware of the space industry’s precarious position, hence the study and preparation of the new space legislation.

“We regard the space industry as one the strategic sectors in our country and an essential enabler to the digital economy and a driving force to Fourth Industrial Revolution worldwide,” said Ms. Nomfuneko Majaja the DTI’s Chief Director.

She added, “Apart from its obvious advantages in communication, it is also clear that space technology now finds application in just about every sector of governance in the domains of Energy, Agriculture, Forestry, Maritime, Mining, Mapping, Urban and Rural Development, Transportation, Intelligence and Disaster Management.

“My vision, therefore, is that the South African Space Sector needs focused co-ordination and should be led by a unit that reports directly to the Presidency. In this way, all government departments can be answerable to the Presidency and become accountable, according to their respective sectoral mandates. Data is a key intelligence tool for effective management of government resources and service delivery. However, this cannot be possible without the government’s commitment in supporting the industry as it is one of the highly technological ones and capital intensive with endless benefits for the economy and the country at large.

“This will put us in a better position to open up the digital economy to all South Africans — not only in urban areas but also in far flung rural areas, where terrestrial infrastructure is not possible. It will improve service delivery and can help to reduce the inequalities we still experience in our country,“ said
Ms. Majaja. 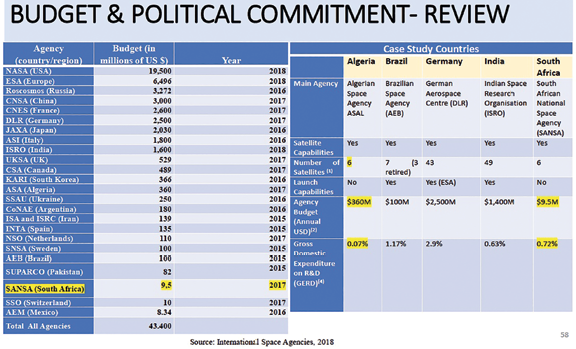 This comparison of 23 national space agency budgets worldwide clearly shows that South Africa is third lowest. Algeria scores the highest amongst African countries with an annual budget of $360 million compared to $9.5 million for South Africa during 2017. This graph was presented by Blueprint Holdings (PTY) Ltd at the Draft Space Industry Development Framework workshop on October 15, 2018. Source: International Space Agencies 2018

Some of the most important recommendations contained in the Space Industry Development Framework report presented at the workshop can be summarized as follows:

1. Space technology can very quickly reduce costs for government (data and communications) and can increase earnings in the short, medium and long term - especially through profit and exports. This can also enable intelligent decision making;
2.  Access to satellite generated data, and the information derived from this in real time, can improve the performance for every single government department and speed up service delivery without exception from Social Services to Agriculture;
3. It can provide access for remote and deprived communities to most needed specialized health, advanced education and other services they currently have no access to;
4. Space enabled data can also assist SMME’s in assessing networks which could open endless opportunities in the field of consumer application;
5. Services related to Spaceports, including launch services and potentially space tourism will facilitate infrastructure development, related jobs and potentially, a tourism offering, however this is seen as long-term developments;
6. Industry should operate in a coordinated fashion of clustering their activities;
7. Broadening participation should be the cornerstone of all space development for inclusive growth.

The report also highlighted the fact that buy-in of space data via commercial satellite operators is extremely costly and does not meet all South African needs; that the South African National Space Agency (SANSA) compared to 24 national space agencies worldwide has to operate on the third lowest annual budget of only $9.5 million dollars (2017); and that South Africa has slipped back from being the leading African space nation now to sharing the number one spot with Algeria, both with a total of six satellites in space. The Algerian Space Agency (ASAL) operated on a budget of $360 million dollars last year.

The workshop titled ‘Building a Development Framework for the South African Space Sector’ was organized by the South African Department of Trade and Industry at the Cape Peninsula University of Technology (CPUT) on October 15, 2018. This was a two-pronged workshop with the objective of presenting the Draft Space Industry Development Framework compiled by Blueprint Holdings (PTY) Ltd. as well as SACSA’s draft Space Legislation to the country’s space stakeholders for comments.

The draft Space Legislation is to be introduced in Parliament by September of 2019 by Ms. Majaja, the DTI’s Chief Director.

More information on these events can be requested from josie@blueprintgroup.co.za or nmajaja@thedti.gov.za.

This report was compiled by Anthony Penderis, Newsletter Editor: African Association of Remote Sensing of the Environment (AARSE) 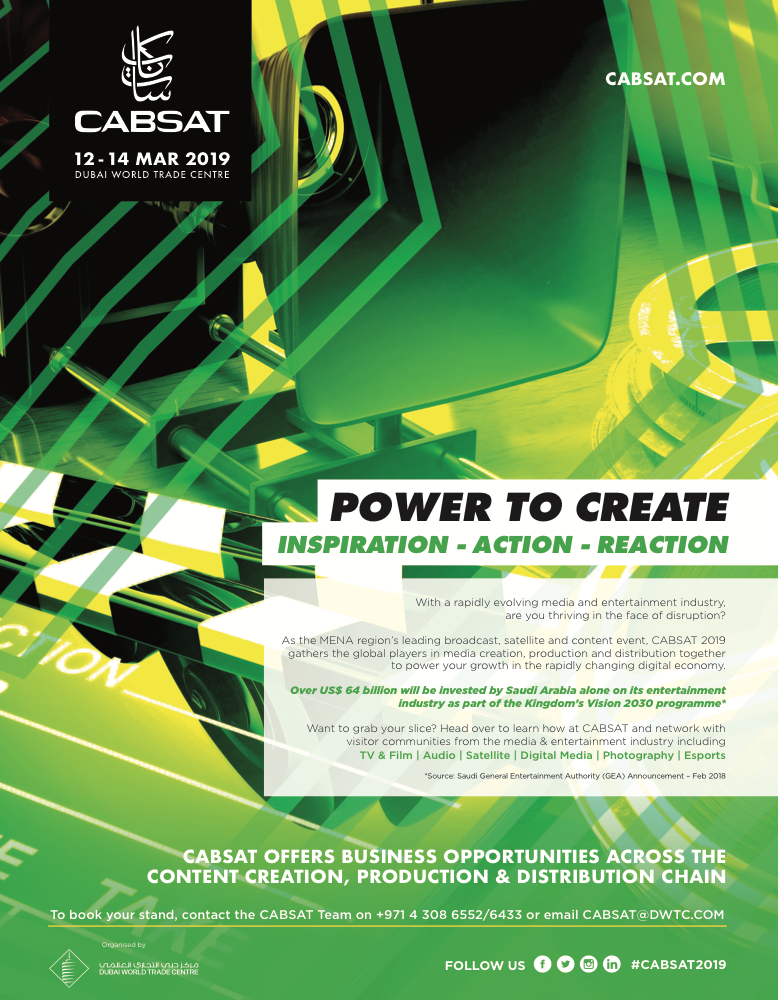