Those attending CommunicAsia will undoubtedly hear that the Asian satellite communications market continues to grow and its near-term future looks bright. 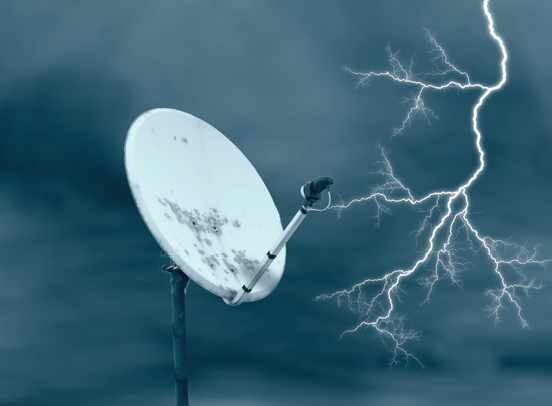 According to a Northern Sky Research (NSR) Global Satellite Capacity Supply and Demand report, Asia-Pacific (APAC) will experience growth from numerous sources over the next ten years, with total revenue forecast to exceed $4.5 billion by 2023. Market growth has been driven by telecommunications applications; however, Direct-To-Home (DTH) satellite broadcasting is rapidly becoming a key growth-driver, as well. Satellite demand is no longer limited to established markets such as Singapore, Hong Kong and Indonesia; newly developing markets such as Cambodia, Vietnam and Myanmar are now expressing demand for satellite communications.

Despite the potential, there are some operational issues that, while not unique to the region, have their own geographical complexity. One is man-made RF interference (RFI)—the other is a product of nature—rain fade—but both have the same effect… disruption of satellite communications.

Fade Away, Rain Fade
Rain fade is a temporary attenuation of an RF signal and typically affects transmissions above 10 GHz, but can cause issues at lower frequencies ,as well. Rain fade is caused by the scattering or absorption of electromagnetic waves by many randomly scattered electrically charged cloud drops or rain drops. Due to their higher operating frequency, and the fact that their signal wavelengths are usually shorter than that of a C-band, Ku- and Ka-band satellites are more susceptible to rain fade than are C-band satellites.

Rain Fade Mitigation Techniques
The simplest way to compensate for the rain fade effect is Uplink Power Control (UPC), the increase of power at the hub. In this example, the transmitter signal is monitored and uplink power is adjusted to overcome rain fade interference with the signal. The advantages of this technique are that it’s a proven technology, is applicable to all satellite service types and good for cases where transponder gain is constant. The disadvantages include limitations for SATCOM power control limits and the need for additional equipment, such as beacon receivers for measuring sky noise and the attenuation caused by rain and water vapor to satellite signals. Additionally, constant transmission of high power may result in interference among users during clear sky conditions.

Site diversity is the ability to connect two or more Earth stations so that signals from an antenna experiencing rain fade interruption can transfer its RF signals to an antenna in a location not affected by rain fade at the time. The advantages of site diversity are that it maintains signal quality, reduces the chances of outages, is a ground-only solution (nothing has to be done to the satellite), and the use of smaller, less expensive antennas is enabled.

Traditional RF transport limitations reduce geographical diversity. RF signals captured at an antenna can only be transmitted over short distances (typically <0.5km over cable and <10-50km over fiber optic) before the signal degrades. Depending on the network and the distance between the two sites, there can be high signal loss and the process requires complex monitoring and switching processes. Distance limitations restrain ground system design by requiring processing equipment to be co-located with antennas.

The challenge has been to develop technology that would enable long distance transmission of RF signals. SpectralNet is such a technology as RF signals are digitized for transport over IP networks, while preserving frequency and timing characteristics, and then uniquely restoring the RF signals at their destination. This approach offers wide geographic diversity as RF transport over IP networks is virtually boundless and enables ground station design to maximize the promise of IP transport. (Please see the sidebar.)

Another approach is Adaptive Code Modulation (ACM) where the modulation/coding is modified to operate in a lower power environment. ACM can help maintain service during some rain events but cannot overcome all, especially intense events. Additionally, ACM will impact achievable data rates during the rain fade event and is good only for services that do not need a minimum data rate services requirement (e.g., many packet-based data services). Additionally, there can be a lack of interoperability among vendors and higher cost modems are usually required.

Frequency diversity draws on a lower frequency band payload during the occurrence of fading at higher frequencies via a ground control station. The affected Earth stations are authorized by the control station to switch to the lower frequency resources when the climatic condition reaches a certain threshold while a processor onboard the satellite ensures the interconnection among the stations operating over two different bands. This method is suitable for satellites operating in two frequency bands, typically Ka- and C- or Ku-band, and usually achieves low levels of outage probability, especially during severe rain fade. However, this comes at a high cost due to the need for an available lower frequency band to support the transition during the rain events.

Accidental or Deliberate—Interference Remains A Problem
Unlike rain fade, RFI is a man-made issue. RFI can be accidental (which accounts for anywhere from 95 to 98 percent of all interference) or deliberate. In either case, both are the result of human error, equipment failure or intent. 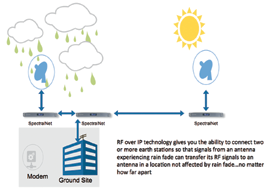 Accidental interference includes cross pol leakage, equipment issues and adjacent satellite interference. Deliberate RF attacks on satellites include piracy and jamming. Piracy, or unauthorized access, occurs when carriers (with content) are transmitted towards a satellite without any prior contract with the satellite operator. Intentional jamming can be the result of one party’s objection to the content (political, cultural, social, etc.) of the targeted carrier and/or extenuating circumstances (political situation, social unrest, etc.)

According to Martin Coleman, Executive Director, satellite Interference Reduction Group (sIRG), deliberate jamming is more a Middle Eastern and North African problem, while piracy is more of an issue for the Asian region. The Cable and Satellite Broadcasting Association of Asia (CASBAA), the trade association for the Asia Pacific payTV industry, has stated that pirated TV programming has a significant negative impact on Asian TV companies’ profits. The Asian content industry is particularly affected by pirates who intercept TV channels and programs and stream them via “pirated devices,” said Christopher Slaughter, CEO of CASBAA.

New Approaches
The first step toward mitigating the disruptive effects of satellite interference is the rapid detection and analysis of an interfering signal through effective carrier monitoring. Once the interfering signal is identified and characterized, its source can be located by a number of geolocation systems.

Modern geolocation systems, such as satID, offer next generation features and capabilities that are designed to save operator effort and therefore cost. Features such as scenario templates, higher levels of automation, improved reporting capability and integrated operator notebooks enable less experienced operators to perform geolocation more accurately and faster resulting in a more robust capability. This improves operational efficiency and can also represent a significant financial savings to the organization.

Another method of identifying the source of an interfering signal is the deployment of Carrier Identification (CID) codes. Under the auspices of sIRG, many satellite operators are embedding a unique CID code to a signal transmission. The CID is embedded in a separate carrier onto the carrier(s) it is identifying.

To facilitate the use of CID, a Satellite Operator Carrier ID database (CIDB) containing all CIDs is being developed by the Space Data Association.

The database will enable rapid identification of an interference source and allow rapid interference mitigation among cooperating operators. Most RFI mitigation approaches require the cooperation of the interfering party. SigX Protect, a patent-pending radio frequency (RF) signal protection technology can be configured to automatically cancel many forms of interference in real-time.

Where once rain fade and RF interference were thought to be inhibitors to satcom growth, new techniques for mitigating each have eased the path to continued growth as evidenced by NSR’s forecast for Asian satcom growth.

Yen-Wu Chen is the Vice President of Asian Operations at Kratos ISI of Lanham, Maryland U.S.A. Mr. Chen has more than 20 years of experience in the development and service of the Asian market. He plays a key role in expanding the company’s business and is responsible for Kratos ISI’s Asian business. He can be reached at Yen.Chen@Kratos-ISI.com.”

Interference and rain fade are but two of the many issues that need to be monitored, detected and managed to assure SATCOM performance… and they are only two of the integrated solutions offered by Kratos. As the only end-to-end, enterprise-grade ground station technologies vendor in the industry, Kratos (www.kratos.com/) is at the nexus of the space system’s control segment, integrating payload control, satellite control and network control into a seamless, holistic approach to assure satellite peak performance and payload delivery.

• For payload/signal control, Monics is the leading RFI monitoring and detection product.
• SigX Protect delivers a new approach to canceling interference.
• SpectralNet enables transport of RF signals virtually anywhere.
• Network control, with NeuralStar Service Quality Manager and Compass Monitoring and Control from Kratos, allows operators to monitor and manage all ground station solutions command and control, signal interference and transport—and, in so doing, manage the levels of service they are delivering to customers.
• For satellite control, Kratos’ EPOCH IPS® is the industry-leading command and control system and its antennas are world class.

Kratos solutions are available as stand-alone offerings for the management of discrete tasks, or as end-to-end solutions for integrated satellite, payload and network management.

[satID®, Monics®, and SigX Protect™ are products offered by SAT Corporation; SpectralNet™ is offered by RT Logic. Both companies are Kratos subsidiaries.]