The motif behind antenna market evolution in the next five years is likely to be the Internet of Things (IoT). 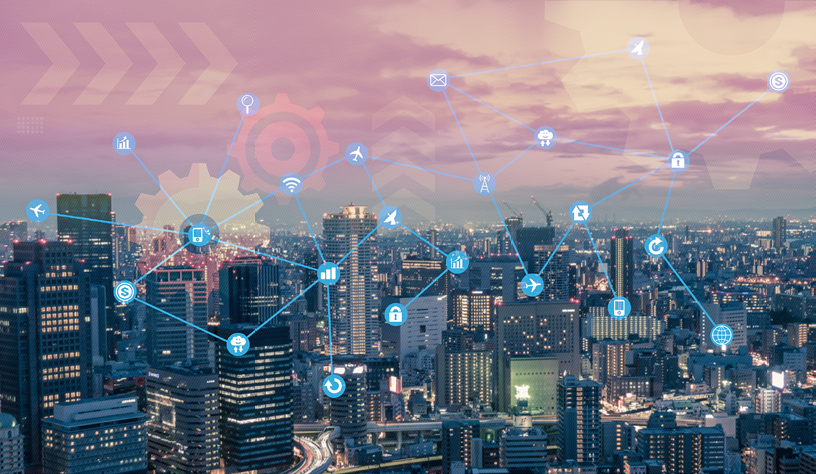 The BCC Research report adequately captures the smart re-branding practiced by antenna vendors to associate themselves with IoT.

Smart antennas continue to provide the bulk of the technological impetus that will leave a lasting impact on the antenna industry. As the industry waits for 5G, antenna vendors are busy perfecting the adoption of smart antenna constructs across power values, operating distances and frequency ranges.

At the heart of all these exciting developments is the uncomplicated antenna — an integral component of the radio. The operating principle of antennas is quite simple: conversion between electrical energy and radiation. 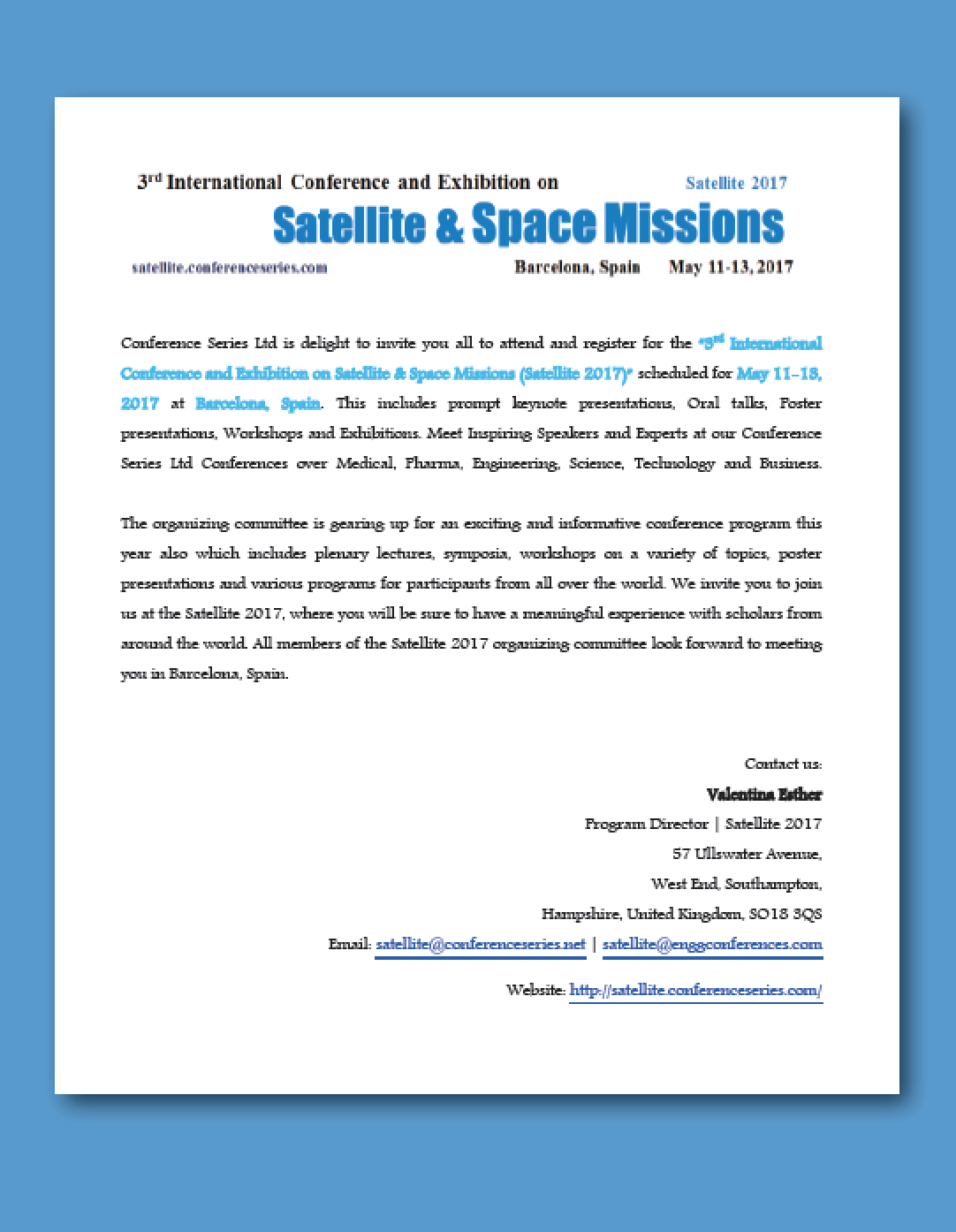 The simplicity of this principle has relegated antennas to the periphery of the active and innovative telecommunications research domain. For close to a century after antennas were invented, antenna technology was in the slow lane of evolution while other components, such as basebands, modems, codecs and processors, among others, witnessed frantic development that led to superior performance.

The evolution of cellular telephony with quantum increases in data transfer carrying abilities with every progressive generation has injected acceleration in antenna innovation, as evidenced by the cresting of patent activity around 2014. Cellular mobile devices forced the industry to concentrate on form factor and power management apart from performance.

These considerations amplified the research thrust on antennas as they had to conform to the limitations regarding form factor and power management. Wireless sensors are a progression of this approach wherein power management and form factor attain greater criticality.

Market dynamic of antennas does not depend on technology underpinnings alone. Antennas are staggering in the diversity of frequencies served, material employed, forms assumed, power managed and range covered.

End applications play a defining role in finalizing antenna specifications and pricing. The vast device-base that employs antennas has resulted in an extremely fragmented market with literally thousands of vendors.

Purposeful innovation requires capital and those with deep pockets are often in the custody of the end-device makers themselves. It is not surprising to witness original equipment manufacturers (OEMs) engaged actively in antenna research and development. The health of the antenna market is the closest to being a microcosm for the global economic health.

This study’s goals and objectives include the following activities regarding antennas:

This BCC Research report is the fourth offering in its series. Its predecessor, IFT073C, was released in September of 2014. The reasons for covering this market remain largely the same — the simplicity of antennas makes them adaptable. Their adaptability has spawned a multitude of use-cases across verticals and applications. Subsequently, antennas have had to attain a formidable diversity in terms of operating technology.

Antennas are available in different shapes and sizes, and support a large range of power operations. This diversity is unmatched among other radio components. The diversity in technologies, end applications, and materials also make antennas a challenging market to cover and forecast.

While most market studies cover specific aspects of the antenna market based on technology employed or end application catered, it is important to present a unified, comprehensive picture covering all mainstream antenna technologies and markets.

This report achieves this objective and also highlights the role played by innovation through a comprehensive patent analysis and uncovers the close correlation between OEMs employing antennas and antenna research and technology.

The market for smart antennas is quantified in this report—considered as the single most important innovation of the decade. It also places in context the role played by wireless sensors in shaping the antenna market

Examined is the antenna market under the following key parameters: 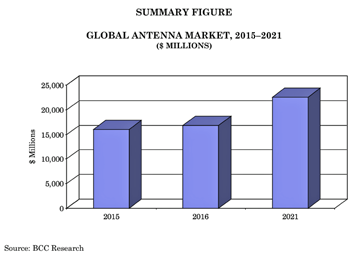 SCOPE of the Report
This report presents the forecasts for antennas for 2016 through 2021 on a volume and value basis. Sales values are presented in US dollars, while shipment volumes are presented in million units. These forecasts are further broken down by antenna technology, antenna material, end application and geographical region.

The following antenna technologies are covered:

The regional breakdown focuses on the following geographical areas:

The Global Markets for Antennas
Breakdown by Technologies, Material, and End applications chapter introduces the antenna with key concepts central to understanding its functioning. It also introduces IoT and explains its impact on the prospects of antennas.

The report then analyzes the different classification criteria: technologies, materials, geographical regions and verticals. In conclusion, it provides a snapshot of the end-user application sector classification.

The End Application
Specific Analysis chapter breaks down the antenna market for each of the end applications along antenna technologies, antenna materials, and geographical regions. The chapter will thus provide the reader with an in-depth view of the dynamics of individual end applications vis-à-vis antenna prospects.

The Major Participants
The main actors in the antenna industry chapter identifies the major categories of stakeholders involved in the development and commercialization of antenna technology.

The US Patent Analysis
This chapter covers innovations that impact antenna systems. Patents are categorized by applications and technology as well as on the basis of allocation by year, assignee countries and assignee organizations.

The report should be of value to the following industry players:

• Original equipment manufacturers (OEMs) and contract manufacturers of antenna systems and components in identifying the size and regional distribution of the antenna market.
• OEMs of products that embed antennas in understanding the technology and material pricing trends for antennas in their sector.
• Service providers and network designers in knowing the prospects of specific antennas in their domain.
• Semiconductor device makers.
• Wireless chipset makers.
• End users and distributors.
• Academic and research institutions.
• Financial institutions.

Both primary and secondary research methodologies were used in preparing this report. BCC Research presents an analysis across the global market for antennas based on reported revenue dollars and units shipped, at the manufacturer level. Also analyzed was the data gathered from various research sources via the Internet. Interviews were conducted with well-placed industry sources.

Report Update
The report is an updated edition of IFT073C that was published in September of 2014.

The firming of prices will be facilitated by the industry’s increasing awareness to the impact of the Internet of Things (IoT), and smart antennas. Indeed, the industry is witnessing a rush of sorts among antenna vendors to brand themselves as IoT-enablers wherever feasible.

While IoT cannot be ascribed to a single path breaking development and is, in reality, a series of progressive improvements in inter-machine communications; the phrase has caught the industry imagination. One cannot blame antenna vendors to highlight their rightful role in enabling communication among low power sensors. Smart antennas have matured and are increasingly acquiring mainstream status.

On the macroeconomic front, there is not much to cheer as compared to 2014, apart from the fact that the Indian economy has registered impressive GDP growth. China is poised to stabilize at a marginally lower growth rate (between 6 percent and 7 percent) than what was witnessed over the last decade.

The state of the antenna market depends largely on the health of its respective end application markets. Antennas are relatively consistent in their functioning with simple operating principles. Consequently, the dynamics of the end application markets are the deciding factors in the growth of antenna sales. As always, predictably, shipments will grow faster than dollar sales. The faster growth can be attributed largely to sizable erosion in average selling prices across the board, in part due to the IoT.
www.bccresearch.com/

The following sources have been referenced:

DISCLAIMER
The information developed in this report is intended to be as reliable as possible at the time of publication and is of a professional nature. This information does not constitute managerial, legal or accounting advice, nor should it be considered as a corporate policy guide, laboratory manual or an endorsement of any product, as much of the information is speculative in nature. BCC Research and the author assume no responsibility for any loss or damage that might result from reliance on the reported information or from its use.

BCC Research is a publisher of technology market research reports and is based in Wellesley, Massachusetts.